This article lists 4 free Zombie Games for Facebook. Zombie games have become very popular and seems everyone is playing them. Zombie games are pretty fun to play. The games in this list either let you play as zombies or as zombie slayers. You can be a warrior trying to eliminate zombies from your city with lots of weapons at your disposal. For most part all these games have amazing graphics and background sound, which you would actually expect from these games. 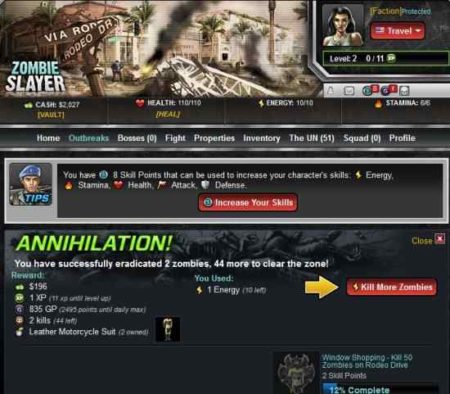 Zombie Slayer is a free zombie game for Facebook. When you start playing this game, the first screen you will see is the one to choose a character from among the many given. After choosing a character, you will be shown a screen where you will be told to kill zombies in a particular area. Click on the red button labeled kill more Zombies. Then you will get a screen like the one shown in the screenshot above. The screen gives you a message that you have killed two zombies and there are 44 more to kill in that area. You will also be asked to power up or increase you skills for further fights. There is no animation or graphics where you fight off with the zombies. You only get the kill more zombies button and keep a check on your health and energy before going into a fight.

Once you have eliminated zombies from one location you can move onto another location. You can look at a map with locations of zombie outbreak pointed out. Once you reach level 4 you also get the option to get involved in fights that other players are having. Like helping out other players to slay zombies. For these fights you need stamina and you can also invite your friends to come in and join the actions.

The game as I mentioned earlier doesn’t support any graphics or animation. But what you need to be careful about is your energy, stamina, skill upgrades, etc. and you also need to have enough cash to buy products and upgrades. 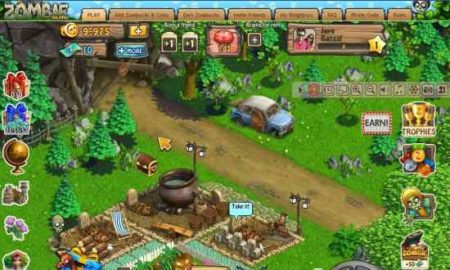 Zombie Island is a free zombie game for Facebook with lovely graphics. In this game you have to help a zombie who wants to turn into a human again. You have to do all the stuff you do in a farming game. You have to till the land, sow seeds, manage zombie graveyards, collect resources, and feed the zombies. The game has nice background sound and you will enjoy playing this game. There are lots of things to do like on the right side of the screen you can see the trophies you have earned or can earn, you can also see the achievements that you can complete.

The market place is a place where you can buy stuff like buildings, crops to plant, decorations, zombies, clothes, etc. Below this you will storage option where you store your harvest, or things you have collected. You can sell things from storage to earn coins or experience points. You can also invite your friends to play with you.

On left side of the screen you can see the quests that you can undertake. Your current game level is displayed on top of the screen along with the number of coins you have. 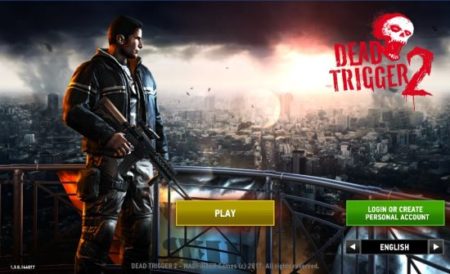 Dead Trigger 2 is a free Facebook zombie game. The game is a first person shooter game and is lot of fun to play. The graphics and sound of the game are awesome. You will feel like you are actually in a zombie outbreak area, trying to find your way and killing the zombies on the way. The game starts with a mission and you have to follow the orders.

The graphics of the game are pretty realistic. You can choose a language in the game as well at the beginning of the game. The options in the game allow you to change a lot of settings like keyboard settings, controls, game, performance settings etc. You also have the option to skip a mission if you want to. 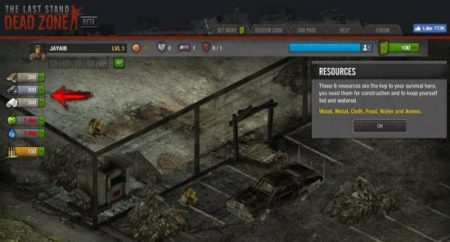 The Last Stand: Dead Zone is a zombie game for Facebook. The game starts with telling you that you are a survivor of the zombie effect and are the leader of your group. You have to choose a character right at the beginning of the game. Choose a characters and go ahead. You will be taken to a compound and will be shown that this will be your base of operations.

You can set up a food and water storage area, where you can store food for the survivors coming your way. You can also create a work bench to make things. Always keep your ammo full. The six parameters given on the left side should particularly be taken care of to survive. These are water, food, wood, metal, cloth, and ammo.

The survivors coming your way can be assigned various roles by you like fighter, econ, scavenger, etc. To collect more resources, you would need to carry missions in to the city infected by zombies. You can create a team and lead the team in the city. Keep your ammo full and look out for zombies.

These are the 4 zombie games for Facebook which you should definitely try out. The one which I liked the most is Dead Trigger 2 because of its realistic graphics and sound. I felt as I was actually in the game looking for zombies. Do give the games a try and see which one you like.