Here is a list of 5 free brain exercise games for iPhone which you can use to sharpen your brain and give it much needed exercise, so that it can work a little bit faster.

All the below mentioned brain games for iPhone are free to play and challenges your brain to an extreme level. Each of the game is unique in its gameplay so you can install all of them if you don’t like to play same game again and again. If you want to compete with others or want to check your rankings, then you can that too from within these bran games for iPhone. 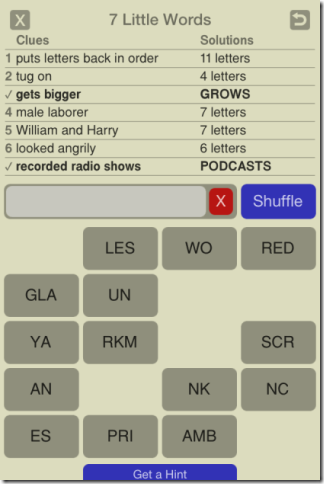 7 Little Words is the first and one of the popular brain exercise games for iPhone. This game is somewhat similar to Crossword game in basic concept but unique and more interesting in its gameplay. In this game, you have to find 7 words by reading 7 clues which will shown to you on the screen. The game also displays 20 combinations of alphabets which you can use to combine and make the right word. While guessing the words, the app also shows the number of characters which form the word. It helps you in guessing the right word. The game has two modes of play: US English and UK English. You can pick the one according to your comfort level. The game includes both free levels as well as paid levels. While playing the game, you can also enable/disable display of number of characters in a word.  The free puzzles are of two types: Free Daily Puzzles (3 puzzles) and Sunrise (50 puzzles).

The next brain exercise game for iPhone is Stupidness 3. This game is very addictive, interesting, and entertaining. This game consists of various questions related to logical reasoning and analytical ability. For each of the right answer given by you, you are awarded with IQ score. This IQ score decreases if you end up giving a wrong answer. Apart from giving the wrong answer, decrement in IQ level also depends on number of wrong attempts tried by you. While solving these questions in this brain exercise game for iPhone, do keep in mind that you have to solve all the puzzles in a limited amount of time. The rate of decreasing the time increases with each wrong attempt. If you attempt a question wrong in succession then time will also decrease rapidly.

The game consists of 25 free stages for you to clear. Each of the question will trick you in its unique way. The answers of the questions are so cool that you will definitely smile and ask to yourself that how could I answer this one wrong? 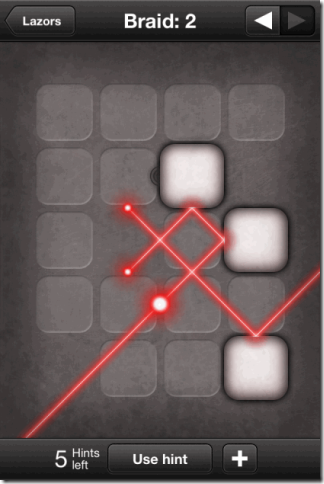 Lazors is the third brain exercise game for iPhone in this list. The gameplay of this game is based on the principle of reflection of lasers after striking the mirror. In this game, you will see a laser, few mirrors, boxes and a black dot on the screen. To clear the level, your aim is to place the mirror at the boxes in such a way that when laser strikes and reflects from them, then it should cross the black dot. You can move the mirrors only in the provided boxes. In some level, you might find more than one black dot so you need to make sure that laser should go pass through all the dots.

The Lazors games consists of more than 24 levels with each of them having further sub levels. You can start playing any level at anytime but you need to clear the first sub-level for playing the next sub-level. All the levels are arranged in increasing order of their difficulty level. As you will move further in the game, you will also find mirros which can’t be moved by you. So the game becomes even more interesting and difficult to master. The game also syncs with your Game Center account for competing online. 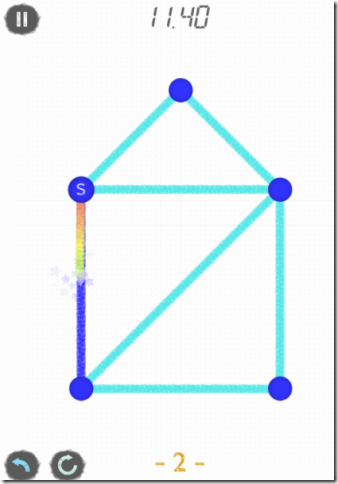 One touch Drawing is a brain exercise game for iPhone is based on a simple and easy to understand main feature: Draw without lifting your finger. In this game, you will be given different unique shapes you need to draw without lifting your finger or you can say using one touch. While drawing the shapes, you can’t draw same line twice.  The game has two modes: Normal mode and Time Attack. Both the modes have same number of levels and sub-levels but the only difference is that while playing Time Attack mode, you have to do the drawing in minimum possible of time. In Normal mode, you are awarded with stars. The game goes on to become more and more difficult as you will proceed with introduction of difficult to draw shapes and inclusion of some more twisting rules. This game has its own leaderboard for each of its level which you can use to see your ranking but you are required to have a Google id for viewing it.

Get One touch Drawing here. 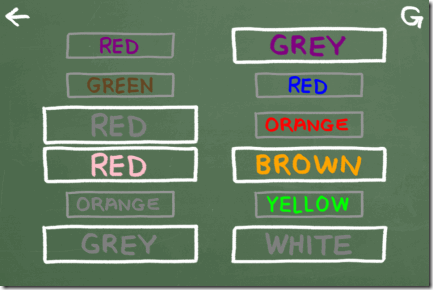 Left vs Right: A brain game is a game which will make your left and right brain fight with each other. In this game, you will see name of some colors written with some other colors on two sides. For example, you might see White written with Green color, Red with Blue, etc. and so on. Now you have to match words on left side with the words on right. While matching the words, do keep in mind that both the words should either be written with same color or they should be the name of same word. The concept looks simple that you only have to match the words; with no time limitations to bound you but in reality, it is a concept which will make your both brains (left and right) go crazy. The game consists of 8 main levels with 30 sub-levels in each of them. Play this game to check whether you can control your left and right brain or not.

Get Left vs Right: A brain game here.

Here I complete my list of 5 free brain exercise games for iPhone. Play these game to give your brain something to work upon and check its true potential. Don’t forget to mention the name of the game which challenged your brain most.