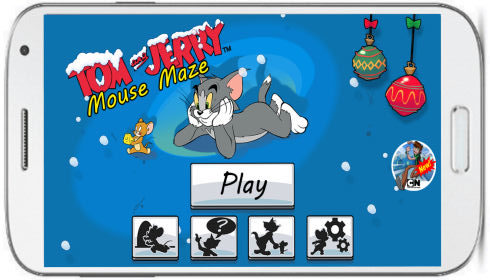 Note: Advertisements are displayed during gameplay.

How to play this free Tom and Jerry mouse maze game for Android:

Tom and Jerry Mouse Maze Free game features two very popular characters from our childhood i.e. Tom and Jerry. You have to play as Jerry and make him eat all pieces of Red cheese pieces scattered all over the mouse maze. Sounds simple, isn’t it! But there are some extra twists in this game which make it quite interesting to play. The mouse maze contains several mouse traps such as oil traps, rat-traps, etc. So, you have to make Jerry eat all cheese pieces by preventing him to fall for mouse traps and get caught by Tom in order to complete a mouse maze level. If Jerry hits a mouse trap, then he will die and you have to start a mouse maze level again. I really loved the animation when Jerry dies, his soul is shown as an angel flying. You will get a time of 5 minutes to complete a mouse maze level. The gameplay of Tom and Jerry Mouse Maze Free is shown in the screenshot below. 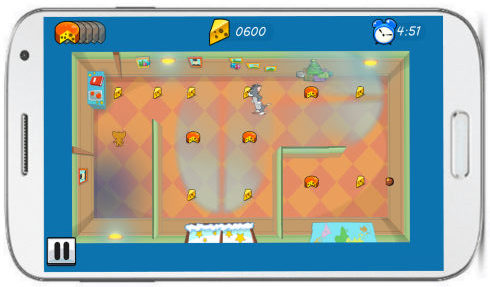 You can guide Jerry through the maze by using your finder. You have to draw a path to cheeses which will be followed by Jerry and he will automatically eat any red cheese pieces that comes across that path. Jerry can go through mouse tunnels and hide behind vases and plants to remain safe from Tom and his friends. Remember once Tom sees Jerry, he speeds up to catch Jerry. You can escape from Tom by changing its direction as quickly as possible. If Tom catches Jerry, then you can see the fight between them as you might have seen in their cartoon shows. So, in order to clear a mouse maze level of this Tom and Jerry Android game, you have to make Jerry eat all pieces of cheese by avoiding mouse traps and Tom. After you have made Jerry eaten all cheese pieces, a mouse hole will open in that level and you have to make Jerry go inside that mouse hole to clear a level. 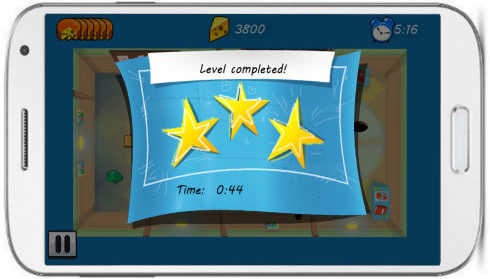 There are around 110 different mouse maze levels that you can play. You have to go through each level to unlock the next one. The game is available in English, French, Italian, Brazilian, Russian, Spanish, and Brazilian.

Tom and Jerry Mouse Maze Free is very exciting and addictive Tom and Jerry Android game. The game is quite interesting and challenging to play as you have to guide Jerry to clear mouse maze levels by escaping from mighty Tom. The only thing missing in this game is its music which felt boring to me. Apart from that, I am quite satisfied with its gameplay and animations. Do check it out if you are a fan on Tom and Jerry games.