Number Tap, is a free Windows 8 number game app. Using this game app, you can play number based game in Windows 8. The game is based on simple maths operations, which includes addition, subtraction, multiplication, division, and square root. And, don’t get tensed as these operations are easy. The game play is: you’ll get multiple mathematical operation based questions one after another. You have to answer as many of these mathematical operations as possible, before the time runs out. After every round you’ll get rated in the world leaderboard, as per the correct answers.

The app consists of multiple badges; which you can play to achieve. Also this Windows 8 number game app shows your status, so that you can compare yourself against the other players around the world. This Windows 8 number game app is a great medium for those, who love maths and love to prove others that they are better than others at maths. So get this app from the Games Category in Windows Store. You can use Windows 8 Search Charm to locate the app in Windows Store or the link given at the end of this article. 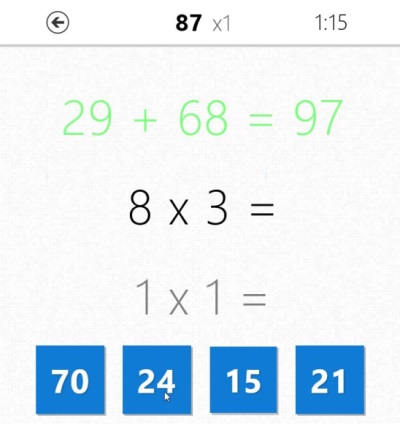 This Windows 8 number game app has a very straight forward gameplay, and that is to simply solve the basic maths operations based questions as fast as possible. The game app is gaining popularity among the Windows 8 users. You’ll compete against the players around the world to get to the top in the world Leaderboard. On launching the app, you’ll be asked to sign in with your Microsoft Account credentials. Once you are done with that, you’ll be asked to create a username. This will be the name with which you’ll be recognized in the game app. After that, you’ll get directed to the Main Screen. 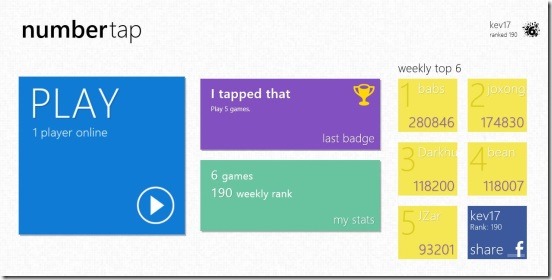 I liked the fact that the app is kept clean. Ads are there but they don’t bother much. The Main Screen contains few but useful buttons; this includes: Play, Last Badge, My Stats, and Weekly top 6 players. Each of these are live tiles, and shows information, for example: Play shows number of online player at the moment, Last Badge shows the last badge hat you achieved, and my stats shows the total number of games you played, and your weekly rank. 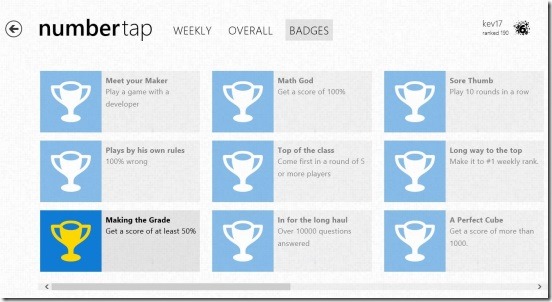 Click on the Badge tile, and you’ll get directed to a screen that shows all the badges; for which you can play in order to achieve them. This screen also shows the world leaderboard on a weekly and overall basis. Simply click on the Weekly or Overall button present at the top of screen to view the respective leaderboards.

Simply click on the Play tile in the Main screen, to start a new game. Once the game starts, you’ll get simple maths based questions such as (2+5)X5= , 156-245=  etc. You’ll get 4 options, from which you have to choose the right answer. The time limit is of 2 minutes. All the players who are online and are playing the game will get same questions. So, the competition for giving the most number of correct answers is against you and the online players. At the end of each game your score gets rated according to percentage of correct answers that you gave, and a leaderboard of current game gets prepared showing you and the other online players ranking.

Number Tap, is a good Windows 8 number game app, specially for the math lovers. It’s functional, and has a simple and straight forward gameplay. Switching between screens is fast and smooth. Competing against the players around the world was fun, and I did really got to test my maths skills. This little Windows 8 game app, sure is a good medium to learn while playing, and give your brain a little exercise!