The Renamer is a free Windows application to automatically rename TV show files that you download from the internet. These TV shows are normally named in such a way that it looks confusing. The Renamer basically uses online help and its own repository of TV show names to deduce the season, episode number and name of a TV show’s episode. It then renames it using this information with a more understandable string, comprising some of the above information. Users can also set their own arrangement of how the files should be renamed.

Now, let’s see The Renamer in action. You might also be interested in tracking TV shows. For that, you can try out epCheck.

How to Automatically Rename TV Show Filename using The Renamer

When you open The Renamer, you’ll get a simple user interface with not much functions.To Rename a clumsily named TV Show file, all you have to drag the files to be renamed and drop them into The Renamer’s UI. The Renamer will automatically connect to Google if it doesn’t have the TV show in its database. 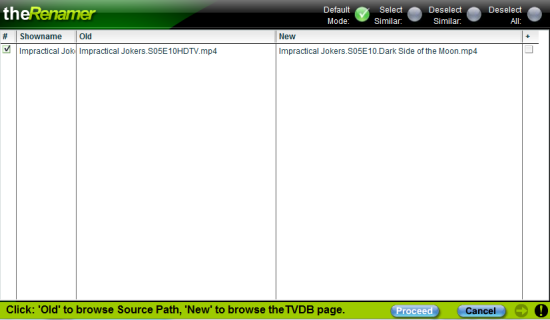 You can review the names and select/deselect episodes of the same shows using the buttons above. When you have made sure all the name strings are as per your taste, click on Proceed. After renaming the files, they can be moved to a desired media folder automatically. You can browse the renaming log in the next window. Now, you might want to change the way the TV show files are renamed. You’ll have to do that in the Settings. Let me show you how.

How to Change the Renaming String on The Renamer

To change the way your files are renamed, you have to click Settings on the top-right. here you’ll see the way your files are named. Currently, the string contains the showname, season and the episode title. You can tick/untick them according to your preference. Further on the bottom, you can set the fetch folder and the destination folder for the TV shows. 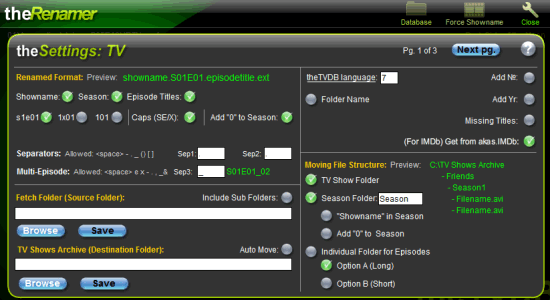 On the other pages, you can browse keywords that are ignored when the file’s name is scanned. You can exclude a keyword if you’d like to retain a part of the original source’s name. In case there is a keyword that is not removed during renaming, you can add it here.

The Renamer has proved to be a boon for me since I am TV series buff. I have an enormous collection of TV shows that have different names throughout. It makes it difficult to find the right episode of a TV show. Now with The Renamer, I don’t have to worry about the clutter. This application deserves 5 stars.

Get The Renamer here.

Know a better alternative to this application? Share it in the comments!