epCheck is a free TV series episode tracker, that gives you information on your favorite TV series. You can search for any TV series, whether old or new, and then add them to your TV series list. You can then view a brief overview of the past episodes as well as the upcoming episodes. You can view the total number of episodes and seasons that are aired till date along with their airing date.

It also helps you to keep a track of the ongoing TV series, in the form of weekly schedule, and  notifies you about the episodes that already got aired, episodes that will be aired today, and the episode that are going to get aired within the week. 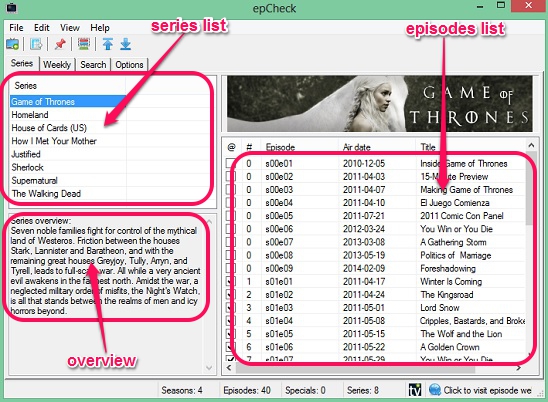 If you love watching lot of TV series, then this is a freeware that you should install on your PC.

It is a simple and handy TV series tracker. epCheck fetches information from TVDB.com. And it also lets you know more about an episode, by giving the option to search the episode in your web browser. To do that, simply right-click on desired episode, click on Web Search, and choose the desired source.

epCheck is very easy to use. Simply add the TV series by clicking on the Search Tab and then enter the series name. Simply select the desired series and click on Add Series button. The freeware automatically loads the information about all the seasons of the series and episodes, saves them locally. 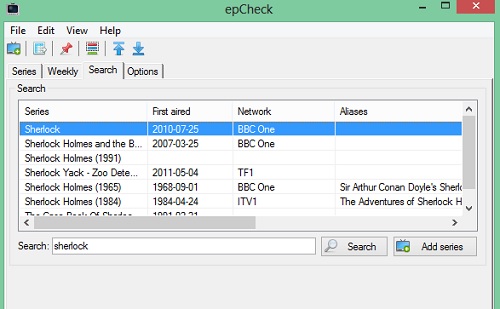 epCheck also consists of a Weekly Tracker that helps you to keep a track of the ongoing TV series episodes. Click on Week tab and you’ll get the episodes of the ongoing TV series, getting aired in current week.  epCheck uses different colors to represent already aired episodes, episodes of today, and episodes that are going to be aired within the week. Blue colored episodes are already aired, Green are the ones getting aired today, and Reds are still to be aired. 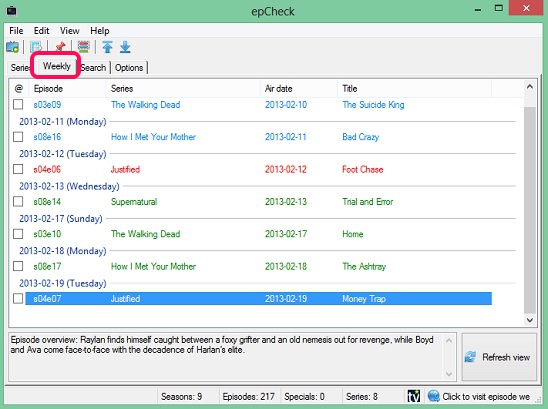 The information about these episodes is not just from one series, in fact it comprises episodes of all those TV series (from your list) that are getting aired currently.

You can also save the TV series and episodes information in CSV file format.

epCheck is a pretty good freeware to track TV series episodes. It’s fast, functional, and easy. The interface is easy, but I wished it could a bit better. Still it’s effective and handy. A must have for TV Series lover.