The Camcorder is a free iPhone app to record videos with VHS (Video Home System) 80s/90s filter. This app lets you record videos in an old classic video mode. The videos captured by this app look exactly like the videos taken in the 18th or 19th century. You might have used many video recorder software to make astonishing videos, but this app is pretty simple and comes with a classic VHS filter which makes your videos look old but astonishing. Nowadays, making videos look classic using different video editors and sharing them to social sites is becoming a trend. So simply use this iPhone app to make classic videos and share them to the world without any hassle. You can easily film videos straight on your iPhone that feel like they were taken in the 80s or 90s. You can use this app to record awesome videos during various occasions, like road trips, birthday parties, night outs, hanging outside, etc.

The following screenshot shows the camera interface with the classic filter. 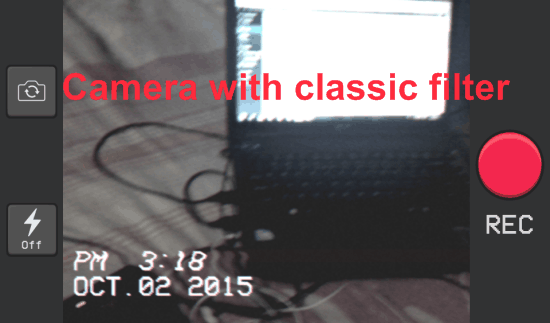 The Camcorder comes with a single classic filter integrated with the camera. You might know how the old video cameras used to record videos with a dusty look and the date and time watermarked in them. This app also bring back those looks in your videos and makes boring things look awesome.

How to Record Videos with Classic Filter:

Download and install the app from the link provided at the end of this post or directly from the App Store.

Let us see the steps to record videos with old VHS 80s/90s filter.

How to record videos: 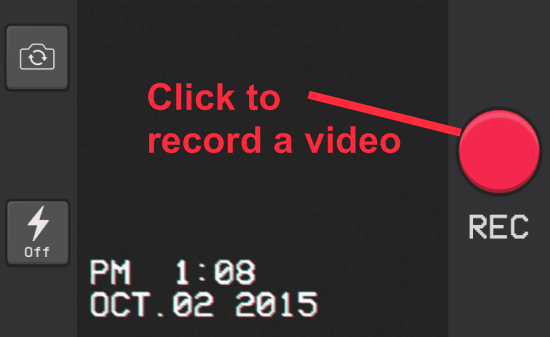 How to toggle rear and front camera:

You can use both the front as well as rear camera to record videos. On the left side of the screen there will be an “Camera” icon using which you can toggle front and rear camera. The most interesting thing about this app is that it supports front camera and lets you make video selfies with the classic filter. In addition to that it also lets you use the camera flash while recording videos. The following screenshot show how to toggle front and rear camera. 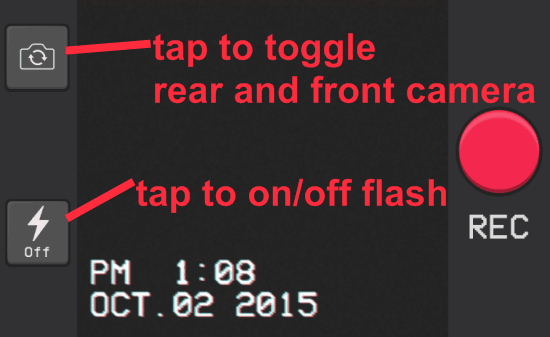 As soon as you’re done with recording a video, simply tap the big red button again to stop the recording. When you tap the big red button, it will show two different options of saving and sharing the video. Tap the “Share” option to share recorded video with your friends via email, Facebook, WhatsApp, Twitter, etc. To save the video simply choose the second option and the video will be saved to your camera roll. The following screenshot shows how to save and share videos. 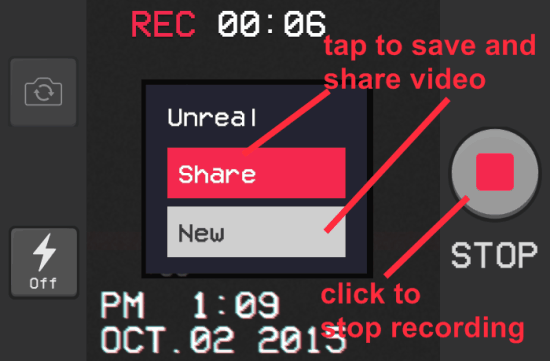 The Camcorder is a very interesting iPhone app to record videos with VHS classic filters. You can create astonishing videos which are similar to the 18th and 19th century videos. Shoot boring things and make them look classic and beautiful using this app. Personally, I like this app but it would have been better if it allows us to change the date and time watermarked in videos, so that they can look really old.

Try the app from the link here.