Here is a list of 5 free Sudoku game for Facebook, which you should definitely try out. Sudoku is a very popular game and has its own fan following. People who love number games would definitely like Sudoku. In Sudoku as we all know, we have to fill in numbers from 1 to 9 in the given grids in such a way that no number is repeated in a row, column, or grid. It does sound complicated when you read it, but it is not that difficult to learn.

Facebook offers lots of games to play, and you will find lots of Sudoku games as well. I’m listing the 5 most popular ones in this article. Let’s look at these Sudoku games for Facebook below. 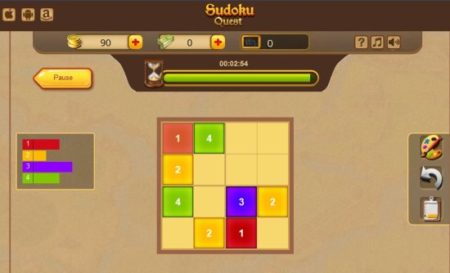 Sudoku Quest is a nice Sudoku app to start with. The app has nice background sound and graphics. The game has different levels and you start with level one. Level one is basically a guided level where you will be guided step by step on how this game should be played and where you have to place the numbers. The initial levels are for beginners as they will have numbers from 1 to 4 only. So if you are new to Sudoku, then you can play with less numbers in the grid and get a hang of the game.

All the numbers are color coded so you do not have a difficulty in seeing which numbers are in the grid. On the left of the screen you have number written from 1 to 4 along with a bar of the same color in front of them. The numbers with the longest bar are the ones which are missing from the grid. On the right side You have three options. The first one with the color palette is to turn the color coding option on or off. The second icon is for undo and the third icon is to toggle between pencil mode. Pencil mode is there to make notes in a cell.

At the top of the screen you will have a timer running to let you know how much time it is taking you to solve a puzzle. You have a pause game button given on the top left as well. The top of the screen also display the number of coins you have earned so far. On the home page of the game there is a daily challenge Sudoku icon towards the top right, which will let you play the regular 9 number Sudoku and will let you know how you can earn game cash if you solve the puzzle really fast.

You can also see your ranking your leaderboard and see which are the top ranking players in the game. Share the game with your friends and invite them to  play with you as well. 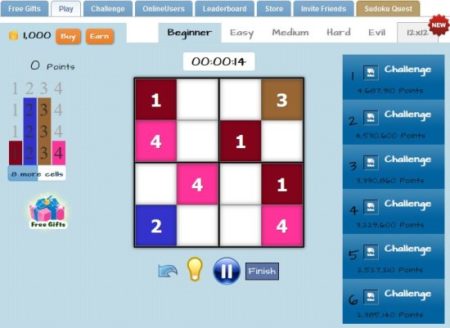 Sudoku Solver is another free game to play Sudoku on Facebook. You can see the game interface in the screenshot above. The game starts you with a small tutorial on how to play the game. Then you land on the beginner level with only 4 numbers, which is easier for beginners to play and get a hang of the game. This game also shows you color coded numbers. You get option to undo a step, get hints when you are stuck, or pause the game.

On left side of the game you see numbers with color bar. These show which number is missing in the grid. For example there is only one number 4 colored, so that means there are 3 number 4’s which are already in the grid and only one more needs to be placed. After you complete a game you will get an option to challenge your friends to play the same game.

Once you are good with the game, you can move on to easy, medium, hard, evil, and 12×12 levels. Which would be much more challenging. All the other levels of the game have the 9×9 grid to play with. There is a timer running at the top of the screen, which will show you how much time you took to solve the puzzle. Also your score is based on the amount of time you take to solve a puzzle.

You can see the challenges you have made so far to your friends at the top of the screen in the challenges tab. Check the rankings in the leaderboard tab and can even invite friends to play the game. 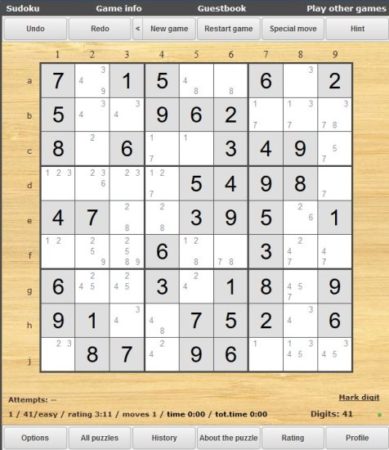 Sudoku Logic is another free Sudoku game for Facebook. You can see a screenshot of the game above. There is not much to the graphics in this particular game. You will just get a plain and simple grid to play. From the menu on top of the game you can see that you can undo or redo any steps. Start a new game using the button for the same. You can restart a game you are playing currently. Click on the hints button to get help when you are stuck.

The bottom menu on the screen starts with options where you can select whether you want the probable numbers displayed in the cells or not. Apart from that you can also choose whether you want to play puzzle in a random order or in succession. All puzzles button will list all the available puzzles in the game below the game grid. Rest of the buttons are pretty self explanatory.

Below the grid you will see a description of the puzzle you are playing like the number of the puzzle, difficulty level of the puzzle, rating of the puzzle, etc. You will also see a timer running at the bottom showing you how much time you took solving this puzzle. The best part about the game is that every empty cell has all probable numbers given in them. To fill in a cell just click on the number you think should be there in the cell. So that makes the process a lots more easier as it does the job of finding and filling the probable numbers for you. 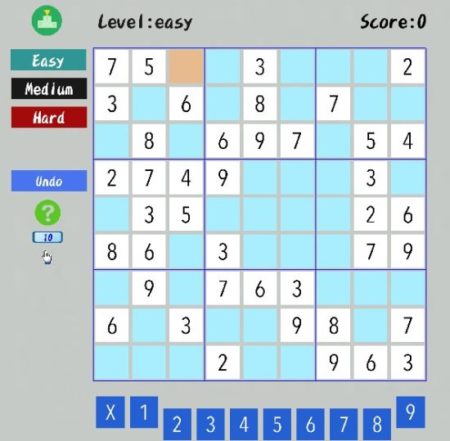 Math Sudoku is another Sudoku puzzle game app for Facebook. A screenshot of the game can be seen above. This game also doesn’t have too many graphics, just a simple grid to play. On the left side of the app you can choose the difficulty level of the game from easy, medium and hard. Start with the easy level if you are new to the game.

There is a undo option to undo any step. Below the undo icon is the hints icon which will solve the entire puzzle for you. But you can see the number 10 there, that means you can use this 10 times only while you are playing. You can also share the game with your friends. Once you complete a puzzle, a next button will appear on the bottom left side of the screen, which will take you to your next puzzle.

For entering number in the cells, you have to click in the cell first and it will be highlighted. Then you can go ahead and click the number you want to fill in the cell from the numbers given below the grid. 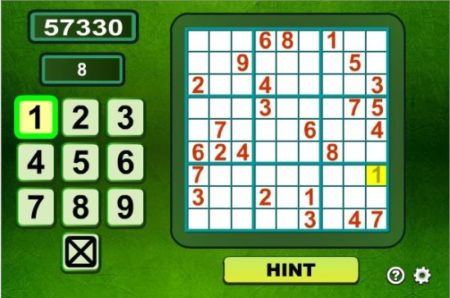 Sudoku is the last game in this list with the same name for Facebook. This puzzle game also comes with a simple grid interface as can be seen in the screenshot above. The game does have nice background music. When you press the play button on the home page of this game, you will get a short one page tutorial on how this game is played. When you click continue on that screen, you will land on your puzzle page.

You have a grid on the right side of the screen and the numbers to be filled in are given on the left hand side. Click on the number that you want to fill in to a cell and it will be highlighted. Then go ahead and click in a cell and the highlighted number will be filled in that cell. You also have a hints button to help you out when you are stuck. The settings option lets you increase or decrease the volume of background sound.

These are the 5 Sudoku game app for Facebook which you should definitely try out. Sudoku Quest is the one which I liked the best because of the graphics and levels like you find in other games. But if you are a Sudoku lover then you will find all of them pretty good. So go ahead and check them out.