Here are 5 free RoboCopy GUI for Windows. RoboCopy is a built-in command line tool that ships with Windows and helps you in mirroring the local as well as network directories with ease. The following software simply take a source and a destination folder from you and then help you copy files across them. You can specify the different switches and other command line arguments and then these software will take care of the rest. Some of these software let you save the settings or tasks to a file so you can import them later easily. And in the following list I have 5 such software which let you do that.

There are a lot of file or folder backup software that you can use to do the same but they are quite heavy. But if you want to use the built-in tool in Windows to do that, then you can do that using Robocopy. But if you have no idea about the commands, then you can use the following GUIs. In these, you just have to specify the source, destination directories. Also, you can specify the different switches to be used in the command from the list that they show. 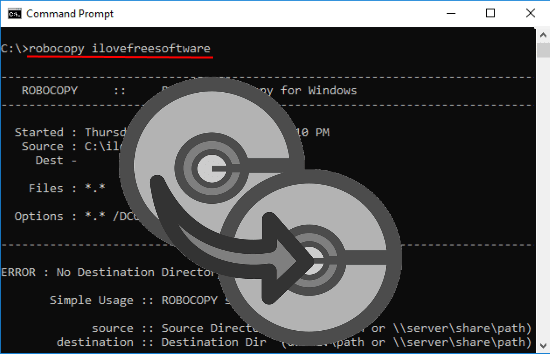 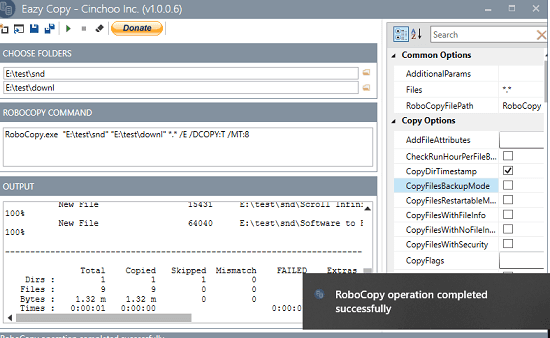 EazyCopy is one of the best free software that you can use as a RoboCopy GUI. It is an open source tool as well and you can use it anytime you want. It just asks you to specify the source, destination folder along with the command switches. There is a long list of command line arguments and switches that it supports. It lets you select multiple switches for the command and then you can run the task. Also, if you want to save the command that you have run, then you can do that. It lets you save the settings to a file and you can import them later.

Using this software as a RoboCopy GUI is very simple. Just get it from its GitHub releases using the above link. After that, just run it and then specify all the parameters that it asks you to fill. Next, from the right side of the software, specify the switches and other command line options to be used in the “robocopy” command. There is a long list of supported switches available and you can use the built-in search as well to find the switch you are looking for. Finally, run the task using the play button from top and it will mirror the folder for you. 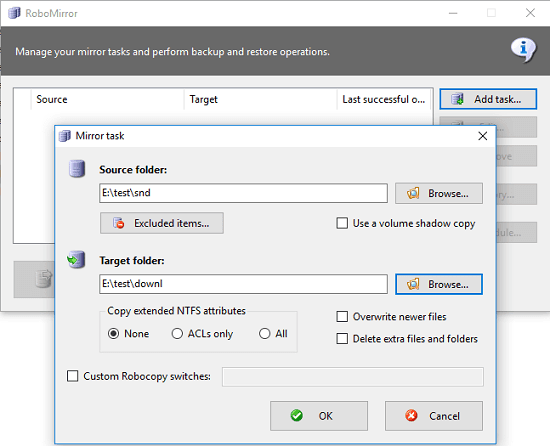 RoboMirror is a simple software that you can use as a RoboCopy GUI to mirror folders in Windows. Here it lets you create different mirroring tasks and then you can run them whenever you want. It offers a simple interface where you can create multiple mirroring tasks and then run them. In mirroring task, it lets you specify a source directory, destination directory, and additional command switches. However, here it doesn’t show you list of “robocopy” command switches. You will have to manually specify the switches and save the task.

Just get this software and start using it. It is a portable software so run it and then create a task in it. After creating a task, simply specify the parameters that it asks you to specify. After that, if you know the supported switches for the robocopy then specify that and save the task. Also, you can opt for other options as well like deleting existing files, extract files, etc. 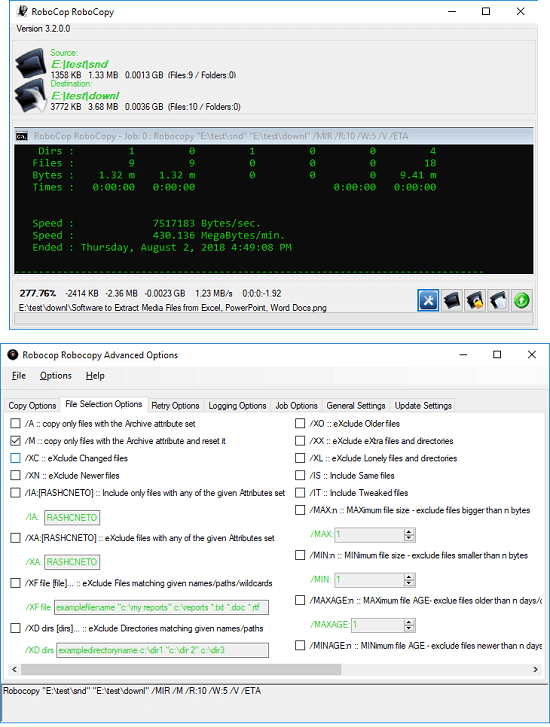 RoboCop RoboCopy is another free RoboCopy GUI for Windows that you can use on your PC. It is quite powerful GUI for RoboCopy that you can use and it is open source. You just have to specify the source and destination path to mirror files and folders first and then specify the other additional command line parameters. It shows a lot of “robocopy” command line argument that you can configure in this and then run the mirroring task whenever you want. Just configure it for the mirroring task you want to execute and then save the settings to a file for later use.

Simply download this software and run it right away to start mirroring desired folders on the go. Specify the source and destination folders in the software on the upper section and then configure the other additional options in the software. For that, click on the settings from the bottom right side and choose the command switches from the “File selection options” tab. After configuring all the option, you can start the mirroring job. 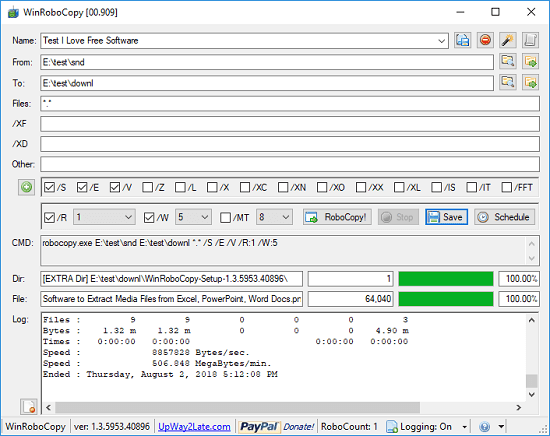 WinRoboCopy is yet another free GUI for Microsoft’s RoboCopy tool. It offers you a very simple interface with all the necessary options to mirror files and folders using the built-in RoboCopy tool of Windows. Here you can create multiple jobs corresponding to different mirroring tasks and save them. Also, not only save, but it also allows you to export the command for specific job that you have saved in it as a CMD file. In each task, you have to specify a source folder, a destination folder, and additional command line options and switches. In the end save the job, run it and then use it whenever you want.

Simply download this software from above and then start using it to mirror files and folders in Windows. Create job in it by giving it name and then specify the corresponding options. Enter the source and destination directory path and then specify the command line argument for the command. After all set, save the job and then run it. If you want, you can even export the “robocopy” command for a specific job as a CMD file. Use the Save button from the toolbar at middle of the software to do that. 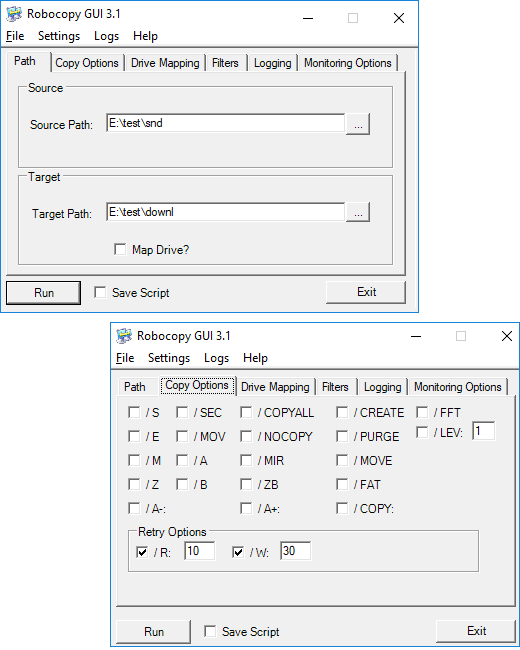 RoboCopy GUI is quite old software but still it is a very good GUI for RoboCopy that you can use. Just like all the other software that I have mentioned in above list, you can use it in the same way and mirror folders and files on the go. It allows you to specify a source folder to copy files from and put them in a destination folder by keeping the files and folder structure same. Along with the mirroring command, you can specify other additional switches in it to start the mirroring operation. It allows you to save the configuration for the current job to a file that you can use later for making the same mirroring operation.

You can get the executable file of this software from the above link and then launch it. It will then extract the setup files to “C:/utility Spotlight” folder. You can then install this software from the setup file and then run it. It has very simple interface. On the first widow, specify the source and destination directories. After that, move to the next tab and specify the command line switches to be used for the mirroring operations. At last, click on the Run button to start the mirroring operation and then it will copy all the files from source to destination. Additionally, you can save the current configuration as a script easily.

These are the best free RoboCopy GUIs for Windows that you can use on your PC. All the software that I have listed can help you mirror files and folders using the Microsoft’s RoboCopy tool for free. You just have to create specify what you want to do and then run the robocopy command accordingly. Most of these software are portable and you can keep them in a flash drive and carry them wherever you go.