Voice Changer App is an application for Android phones which allows you to change your voice into other funny voices. You have to first record your voice in this Voice Changer app and then choose the preset for your voice change. This is a very simple to use app with very few features in it. It can even be used by kids to have some fun with family and friends.

Using this Voice Changer app for Android,  you can record messages in your voice and change it to robot voice, children voice and other creatures voice like, mosquito, mouse, aliens etc. You can play it to your friends or family or share it on Facebook. 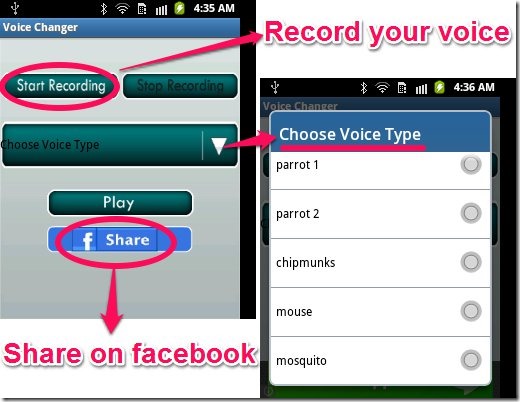 This app does not have features to import recordings and sounds and neither does it let you edit them. Other than sharing on Facebook and playing it that instant, there is no option to save and listen to them later. If you want a Voice Changer app with more features than this, you can try Change My Voice or Ultra Voice Changer. You can also try Voice Changer for Skype.

The Voice Changer app has more than 10 voice types to choose from. You can change the voice that you recorded in the Android app to any one of the voice types that are given in the application.

The voice presets given are listed below:

Voice Changer App for Android can change your recorded voice into other funny voices. I found this app fun. Using this app to change your voice into other creatures’ voices was a good way to pass some time and refresh yourself. Though I would love if we could at least save the voices, but otherwise liked it.