EOL is a free DOS to Unix, Unix to MAC line endings converter software for Windows. The software takes an input text file or a group of text files from you and then you can convert their line endings. It supports Unix, MAC, and Windows platforms to convert text files between each other. It supports wildcard filter to select files from a directory and it quickly does its work and makes the changes in the same text file you choose to convert. Also, if you want, you can choose to leave a backup copy of the text files on which you use it on.

If you are familiar with Windows, Unix, and Mac platforms then you know that these platforms save text files with different line endings. Windows uses “CRLF”, Unix uses “CR” and MAC uses “LF” to indicate end of line in text file. And if you switch to one platform to another, then you may find it difficult to manage your text files. And that’s where EOL freeware comes in handy. 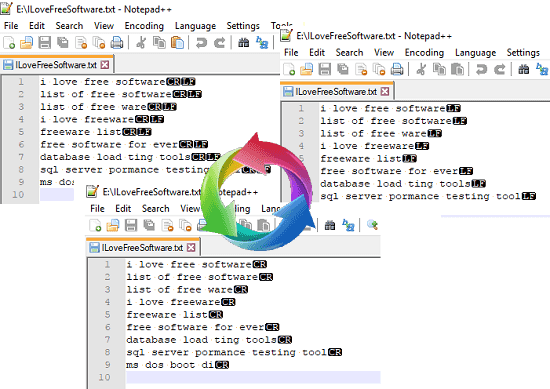 How to Convert DOS to Unix, Unix to MAC Line Endings?

EOL makes it very easy to convert Windows, MAC, and Unix text file’s line endings to any other platform you like. You just have to select the text files you want to convert and the EOL freeware will take care of the rest.

EOL comes with an intuitive interface and a built-in file browser. You can use that to locate the target text files you want to convert. It lets you select files which match a pattern (wildcard) and lets you convert those text files. However, to make the software work, you may have to run it as administrator if it fails to work.

Step 1: Open the software after you have downloaded it and installed it from the URL at the end. After that, from its interface, you can use the file browser to locate the target text files you want to convert. 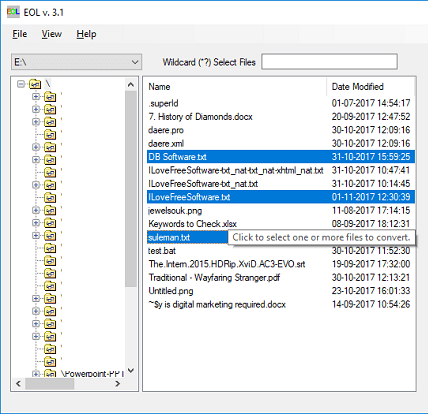 Step 2: From the bottom right side, specify the platform to which you want to convert the selected text files. Also, you can opt to leave a backup copy of the original text file you are about to convert. 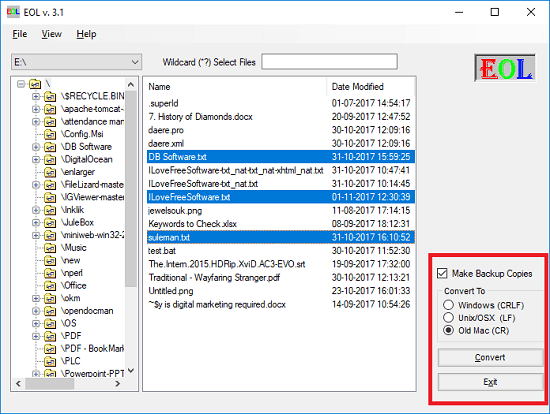 Step 3: Finally, hit the Convert button and it will process your text files immediately.

These steps will help you convert your text files from DOS to Unix or to any other platform which it supports. In the normal circumstances, you cannot see line endings in text editors, but you can see them in Notepad++ while the special character viewer is enabled.

EOL freeware is a very nice DOS to Unix, Unix to MAC line endings converter software for Windows. If you use multiple systems running on different platforms, then you can use this software. It can very easily convert line endings of any text file between MAC, Windows, and Unix.