Crazy Taxi: City Rush is the official Crazy Taxi game for iPad which has been released by SEGA a few days back. The game is the smartphone version of popular game franchise Crazy Taxi. It is a simple, addictive yet difficult to master game which will make you hooked to it. The game is one of the famous arcade game which has seen many versions being released so far. In this game, you have to play as a taxi driver. Being a taxi driver, you have to pick up passengers and drop them to their destinations.

While doing all this, you can perform stunts and other activities which will help you in collecting virtual dollars and gems. You can use these gems and dollars to buy new taxis, upgrade taxi, and even customize it. If you link up your Facebook accounts, you can track your progress against your friends. 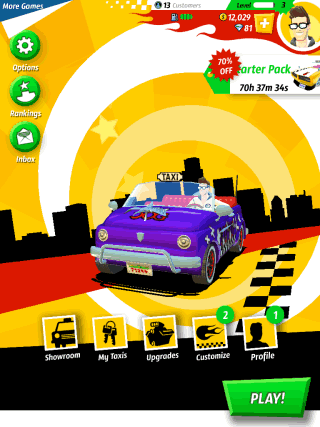 When you launch official Crazy Taxi game for iPad, you will be asked to sign in with your Facebook account but its optional. After this, you have to pick a character as the taxi driver. Initially, you can choose from: Vincent Cruz  and Maria Del Rey. Rest of characters will be unlocked as you will proceed in game. There are three main parts of town in which you will be riding the taxi: Downtown, Beach, and Uptown.

Your character will start with Downtown as a rookie driver. You will have to pick up passengers and drop them to their destination within a limited time. You are rewarded with bonus depending upon the fastest you can drop them, stunts performed, and various activities. Whenever you drop any passenger successfully, you will win virtual dollars and gems. In case you fail to drop any passenger, then you can retry the level anytime. 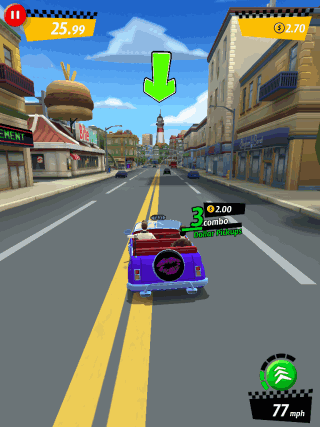 As you  continue to drop the passengers successfully, your reputation as a good taxi driver will increase. It will help you in picking up VIP customers and thus getting more and more money. You have to collect the money to modify your taxi, buy new taxis, and upgrade their performance. While dropping any customer, you will also find traffic in the way along with coins. You have to collect coins and also hit the traffic to collect extra bonuses. But don’t try to hit each and every car on the road, as it will decrease your car’s speed which will make sure that you are not able to drop the passenger successfully. 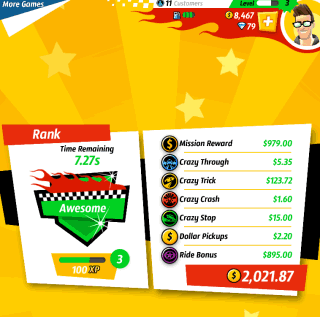 Apart from this regular challenge, you will also have to face different other challenges which will appear randomly. These challenges help you in earning extra bonuses etc.. In this way, you have to play this game in such a way that your character rises up to the ranks of best taxi drivers and also buy maximum number of taxis.

The official Crazy Taxi game for iPad is a really awesome and addictive arcade game. The game has nice graphics with challenging levels. It is even more fun to play against friends as to check that who is the owner most number of taxis. Do play this game.