This post lists 5 free websites to play T-Rex game of Chrome online. On these websites, you can play the built-in Chrome’s T-Rex game for free. I am sure many of you have played the T-Rex game in Google Chrome when the internet is not available. The game is really addictive and fun to play. But the problem is that you can only play this game when there is no internet connection on your computer. Also, this game is not available in other browsers like Firefox, Microsoft Edge, Opera, etc. If you want to play this game in other browsers then you can use all the websites that I have mentioned below.

On the following websites, you can play the T Rex game of Google Chrome without creating an account. And the best part is that you can use any browser on your computer to play the game. Just open the website and start playing the game right away. All the control are the same that you use in Chrome while playing this game. However, you may notice some changes like the missing dark theme on these websites. 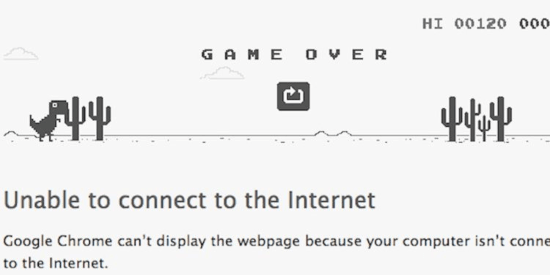 Play T-Rex Game of Chrome Online Free in these Websites: 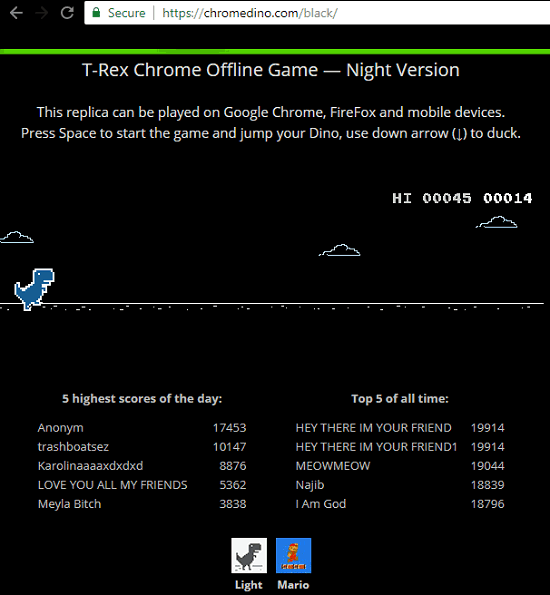 Chrome Dino is the very first website in this list that you can use to play the T-Rex game easily. Here this website has extracted the game from Chromium and placed on its server. This is a dedicated website to play the T Rex game and with the same controls that you use in Google Chrome. In addition to that, there is a separate dark mode for the game given and you can even play this game on your mobile devices easily.

Not just Google Chrome but you can use any browser to play this game online for free. The Other browsers which are supported are Firefox, Opera, Safari, and Microsoft Edge. You don’t have to do a sign up process to play the game. Just access the main website using the given URL and then simply start the game and play it. The option to switch the dark theme is at the bottom. 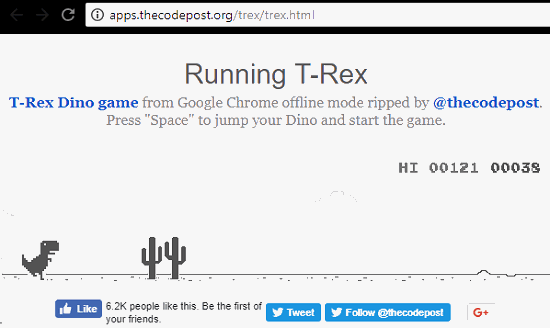 Running T-Rex is a simple website where you can play the T-Rex game of Chrome for free. Just like the website above, you can easily play the T Rex game. Here it provides the original game that you can play in your free time. All the controls of the game are same and you just have to open the website and start playing it. The website has also preserved the original sounds of the game and you can play it as long as you want it in any browser you like. It supports all the major browsers that are popular among various users.

There is nothing specific about this game on the website here. The look and feel of the game is same and even the controls are same. You just have to open the website using the above link and then start the game by hitting the space bar. When the game starts you can use the usual game controls to play it. You can see the corresponding score on the website and keep playing the game as long as you want. 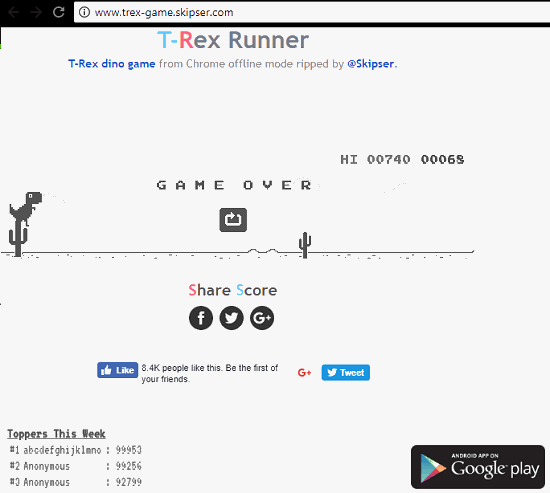 T-Rex Game is another free website that you can use to play the T Rex game online. Just like all the other websites in this list, you can use this game in any browser you like. The developer of this website has also created an Android app to play the same game right on your android smart phone. Also, there are some slight modifications in the game than the original one. Hear it allows you to even get down on the ground to prevent itself from the crows. And for that you can use the down arrow key from your keyboard. In addition to all this, you can even see the high scores set by other players on its interface. If you are a good player in this game then you can set your own high score as well and your name will be displayed on the website.

To play this game, simply use above URL to reach the website. After that, start the game right away. Hit the space bar to start the game and then use the usual game controls to play it. Also, if you want to play the game right on your Android phone, then there is a link to the app on the Play Store. You can follow that link and install the game on your phone.

T-Rex-Runner is an open source project in which the developer has extracted the game from Chromium as it is. The game is currently hosted on the GitHub pages and if you want, you can get the code from the actual GitHub repository and host it on your end. The web page of this game is very distraction free and other features of the game are same like the game controls, game sounds, and the playing manner. However, here you will find the dark mode missing which you usually get after reaching a certain level in the game.

Simply access the website using the above link and then start the game. For starting the game, you can use this space key of your keyboard. After that you can keep playing the game as long as you want.

T-Rex-Runner2 is another open source project on GitHub where the developer has extracted the T-Rex game from Chromium and modified it a little bit. However, the modifications are not very major. Only change here is the runner in the game. In this game there is another creature in place of the dragon. But, all the controls and sounds in the game are same as that of the original T Rex game of Chrome. And just like all the websites that I have mentioned above, you don’t have to create an account or do a sign up to play this game. Just go to the web page of the game and then start playing it. And since it is open source, you can grab its source code from GitHub repository and even host it on your local or remote server easily.

These are the best free websites that you can use to play T-Rex game of Chrome online. If you really like this game then I am sure that you will love these websites. And the best part about these is that you don’t even have to create an account to get started. So, if you are looking for ways to play the Chrome’s T-Rex game outside Chrome, then you will find this post really helpful.