This article covers 5 free word puzzle games for Facebook. Word puzzle games are quite fun and challenge your brain. They are said to improve your memory and vocabulary. Word puzzles have a lot of followers and people love playing word games. Most of the games have a very easy game play and initial levels would look like practice levels to you. But when you are through the first few levels then the game starts getting challenging.

All the word games also come with nice interface and background music. Let’s look at these word puzzle games for Facebook below. 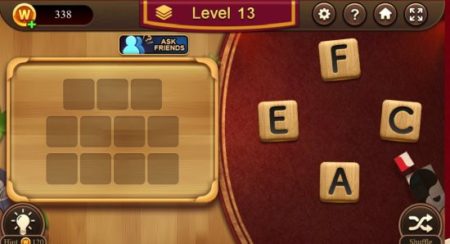 Word Connect is a fun word game app for Facebook. In this game you will be shown a short tutorial at the beginning to let you know how to play the game and form words. Once you are done with the tutorial you can start playing the game. The game play screen can be seen in the screenshot above. In this screen you are shown the jumbled letters on the right side, like there are four letters given in the above screenshot. On the left side are blank boxes given, which denote that you have to form three words using the four letters with the given length each.

You can form words by pressing and holding one letter and forming a chain to other letters in the word. You can also use the hints option when you are stuck and can’t find a word. Use the shuffle icon on the bottom right side to shuffle the word around for a better view. The level you are at will be displayed at the top of the screen along with the number of coins you have. You get coins every time you level up and you also earn bonus coins everyday by spinning a wheel. Coins can be used to buy hints when you run out of them. 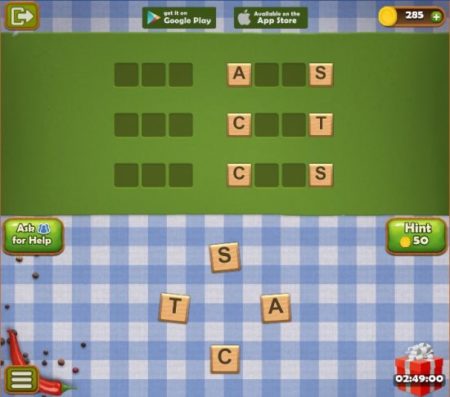 To form a word, just press on the first letter and drag the line to other letters in the word. Once done the letter you formed will be entered in one of the blank boxes if it is right. Otherwise you will have to guess again. The three horizontal line icon at the left bottom corner lets you control the background music and sound of the app. You can also use the hints button for 50 coins, when you are stuck and can’t find a word. 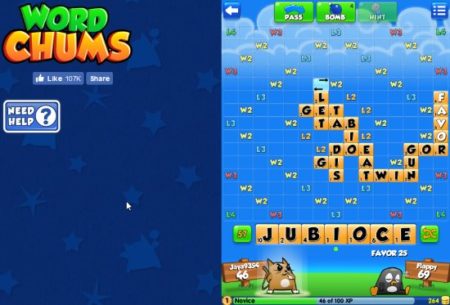 Word Chums is a free word game for Facebook. In this game you start with creating a player name and click continue. After that you will be taken through a small tutorial to let you know which option is where and how to form words on the board. Once you are done with the tutorial you can start playing the game. You will be given three options to play the game. You can play against a friend, play against a random online player, or play against the computer.

For practicing you can play initial few games against the computer to get a hang of the game. After you are good with the understanding of the game then you can go ahead and play against your friends. You have to form words on the game board that will fetch you maximum points. Once you have formed a word and it turns green means you are ready to go. Click the play button on the top to play your word. Then it will be your opponents turn to form a word on the board. Try to use maximum number of letters given at the bottom of the game play screen. You can use the hints button on top of the screen to see where to form a word for more points. You also have a bomb button which will replace all your letters with new letters at the bottom. 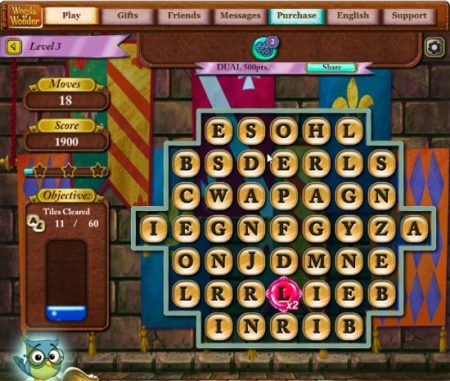 Words of Wonder is a another word puzzle game app for Facebook. In this app you get a letter grid like shown in the screenshot above. You have to search for words in this letter grid to score. The words that you have to search for have to be atleast 3 letters or more. The game starts with the owl Watson guiding you through the interface of the game. He will guide you and tell you which option is where and how to search for words and score points. Once you understand how the game works then you can start playing.

The objective of each level is displayed on the left side of the game along with the number of moves you have and you score. If you complete your level objective with moves still remaining, then the remaining moves will be converted in to bonus score. The letters that appear in pink color on the screen will fetch you more points. So try to include them in word that you are searching for. 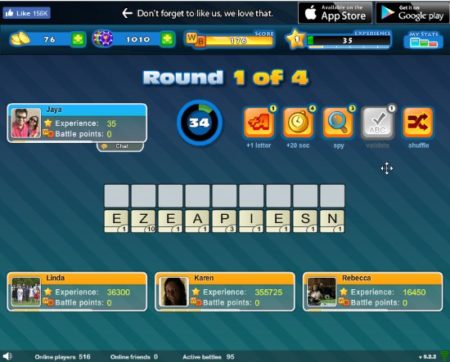 Word Battle is a free word puzzle game for Facebook. In this game you begin with a short tutorial about how to select words in this game. After this tutorial, you can start with the actual game, where you will be paired with three other online players. All four of you will be given a chance to choose letters to form words with. Then all four players must come up with words before the time runs out. You will get 40 seconds to form a word. You will be scored on the word that you formed.

After four rounds are over, the results for the game will be displayed showing first to fourth position. You also have a chat option which you can use to chat with other players in your group. After your time is up, you will be shown how many points you scored for your word. You would also be shown what word other sers formed and how many points they got for it.

These are the 5 free word puzzle games for Facebook which you will love playing. You would not be able to stop playing because all the games are so interesting. The games I liked the most are word soup and word battle. Word soup because its unique and fun to play. Word Battle because of competing against other online players. So try these games out and see which one you like.