Some of these screenshot capture software also help you record desktop screen and then upload it to Dropbox. Moreover, you can also upload screenshot to Imgur, Google Drive, FTP, Facebook, and other supported services. 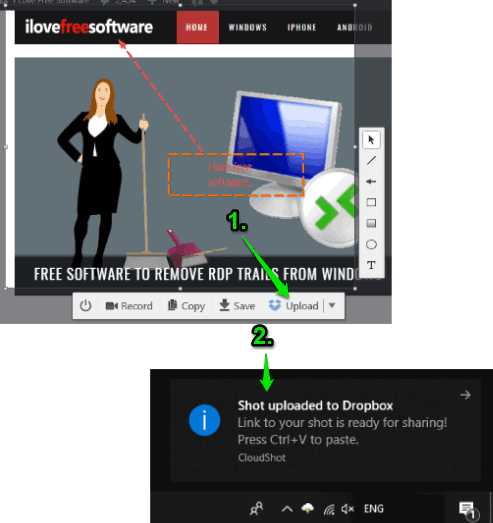 You can also use this software to record screen and upload the recording to Dropbox account. This makes the software a bit better than its competitors. You first need to run the software and access its Settings window using its tray icon. After that, you can set custom hotkeys to take screenshot, set screenshot format (PNG or JPG), show/hide mouse cursor in screenshot, record screen, and authorize Dropbox and/or other services. Configure the options only once and then it will be ready to serve you.

Apart from uploading screenshot to Dropbox, the software is also handy to integrate other services such as FTP, Imgur, OneDrive, Google Drive, and Local/Network folder.

Its separate review is also covered by us here. 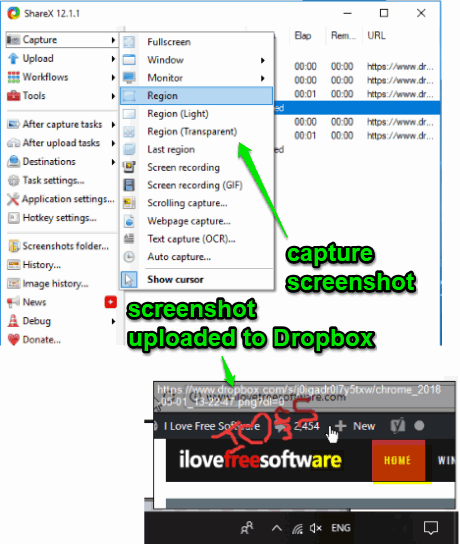 ShareX is an open source screenshot capture software. The good thing is it also provides the option to upload screenshots to Dropbox. This is a very popular software and comes with tons of features. You can capture a particular opened window, monitor (if multiple monitors are connected), full screen, a specific region, last region, etc., and then it will automatically upload that screenshot to Dropbox. You can also configure it to first edit screenshot using the annotation tools and then upload it to Dropbox. When the screenshot is uploaded, its URL is copied to clipboard and you can also preview the screenshot in a small pop-up.

The software also brings screen recording as well as record screen as animated GIF, which makes it more useful. Moreover, it is not limited to upload screenshot or recording to Dropbox only. It lets you connect with Imgur, Flickr, OneDrive, Box, Amazon S3, Azure Storage, FTP, Photobucket, Twitter, and many other services to upload the screenshot.

Apart from that, ShareX also brings its built-in Ruler, Image Editor, Color Picker, Hash checker, and other tools. All such features are packed in a single software. Therefore, the software is better than many other similar tools.

You may also check its separate review. 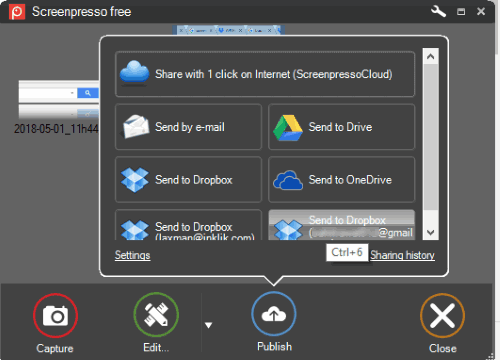 Screenpresso has one special feature which makes it stand apart from the crowd. It lets you connect multiple Dropbox accounts and then you can capture and upload screenshot to any of those connected accounts with only two clicks. Use “Settings” window of this software to configure hotkeys to capture screenshots and add your Dropbox accounts. You can use this software to capture a region, window, previous region, and full screen. A “capture screenshot with delay” option is also present that you can use.

The software also provides an option to record screen and send it to Dropbox or other connected service(s) but the recording contains software watermark. If you don’t like that, then simply use this software to upload screenshots to Dropbox. 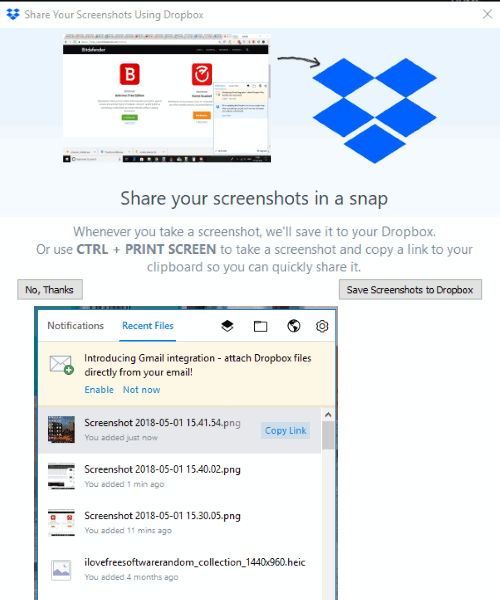 The feature is quite good but not very helpful when you want to upload a specific region to Dropbox. If your need is to capture the full desktop screen and upload it to Dropbox, then Dropbox desktop client is a good option to try.

Note: You can also use Ctrl+PrintScreen hotkey to upload screenshot to Dropbox and copy its URL to the clipboard automatically. But this didn’t work for me. Maybe, it was because that hotkey was associated with some other program. So, you may try if it works.

These are the best options to capture and upload screenshots to Dropbox directly from PC and get the sharing link for each uploaded screenshot. My favorites on this list are “CloudShot” and “ShareX“. Both have amazing features, especially the feature to record desktop screen and support for a lot of services. Other two software also work pretty well to upload screenshots to Dropbox but the first two software are better in terms of features.