Google Earth generally uses KML format to save the geographical data that you like to save. And if you use some GPS software or apps that use GPX data then you can open a KML file in that by converting it to GPX format. And the following software will help you do that in just a few clicks. 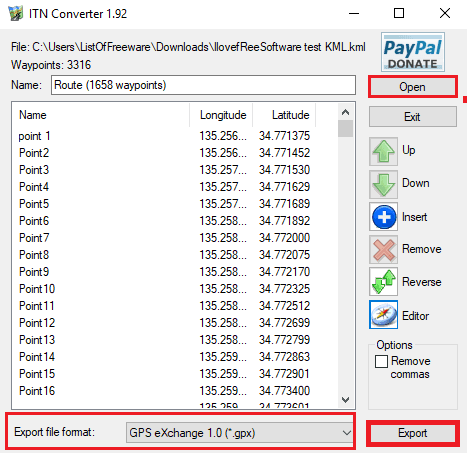 ITN Converter is one of the best free KML to GPX converter software for Windows. Not only, KML to GPX but this software can convert most of the GPS file formats to one another easily. It lets you import a KML file and then it will list all the coordinates from that. There is a map in the software that you can use to visualize those coordinates and edit them if you wish. Along with lots of GPS file formats, there are a lot of maps available in the software on which you can visualize the KML file. ITN Converter supports converting KML to other types of GPX files too. You will find the list of other formats in the conversion dialog.

ITN Converter comes as standalone software as well as a portable software. So, download the software as per your choice and then run it. After that, load your KML file that you want to convert to GPX. This software will list all the coordinates from the KML file to you. And if you want, you can visualize them on map. Click on editor to see the KML file on the map. You can also edit the way points or coordinates if you want. Finally, after ensuring everything is fine, you can simply export the KML file to GPX. For that, return back to its main interface and then specify the export format to GPX using the bottom drop-down. Next hit the Export button and it will save the GPX to file to the specified directory. 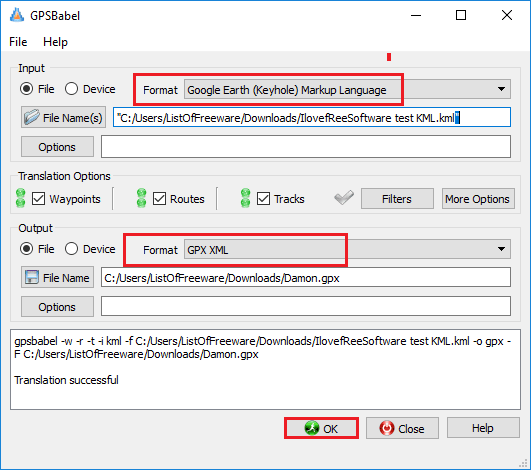 GPSBabel is quite a powerful KML to GPX converter software for Windows. This is feature rich software that supports a very large list of GPS file formats to convert them between each other. It is quite a simple tool that just converts the KML file to GPX in just a few clicks. Also, it lets you opt for some other options while converting your KML file. It lets you define the width of the lines, line color, drawing extrusion line, indicate direction of travel, writing KML track, exporting Placemarks, and a lot of other options. However, in this software, you will not be able to visualize the KML file as there is no map or editing options available. It just takes the KML file from you along with some options and then convert it to the desired GPS file format.

Using GPSBabel as a KML to GPX converter is pretty simple. Just open the software and then in the Input section, specify path to the input KML file. After that, specify Google Earth (keyhole) Markup Language in the input file format. Click on the Options button if you want to specify some parameters. Next, move to the Output section and then set the Output format to “GPX XML” and then hit the OK button from the bottom. The software will start converting the KML file and you can see the status of the conversion at lower side of the software. 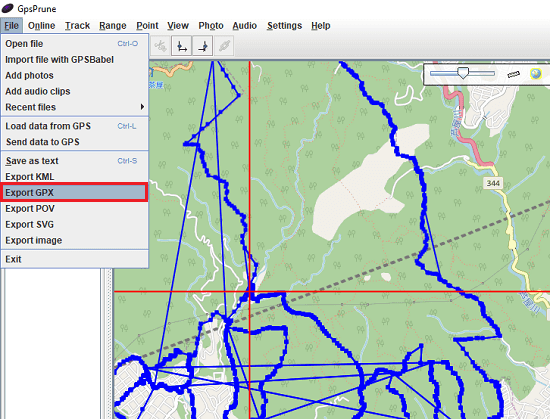 GpsPrune is another very good and cross-platform KML to GPX converter software. It is basically a KML viewer software that supports converting it to GPX and some other formats. Apart from KML file to GPX, it can also convert a KML file to POV, SVG, TXT, and an image. You can see the coordinates on the map with the exact location and add or remove them too. There are a lot of other options that you can use. The map that it shows can be cached on disk so it will work faster when it comes to visualize the KML file on the map.

GPSPrune just requires Java to be installed on your PC. After that, you just launch it and then you can import the KML file in it. After that, it will draw the coordinates on its interface that you can edit. By default it won’t show the KML points on the amp. You will have to enable the map from the toolbar of the software. And when you have to visualize it, then you can finally export it as a GPX file to any folder you like. Use the File > Export GPX option to covert KML to GPX. It will then ask you the location where you want to save the GPX file. 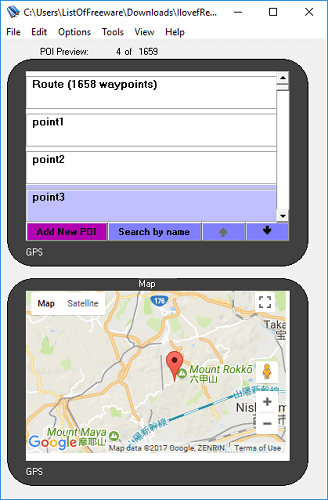 Extra_POI_Editor is a free program to edit, convert, create, and view XLS, CSV, KML POI, GPX, and OV2 files to any other format. It is quite an advanced software and comes with various tools and features that you will like. It lets you open a KML file and then it helps you visualize that. And you can easily convert that to GPX in a very straightforward manner. You can visualize each and every point in a KML file and edit if you want. It offers visualization of the KML file on the map and you can then convert it to GPX.

Run the software and then open the KML file in it using the File menu. After that, it will list the geographical data from KML on its interface. You can edit the points if you want by simply double clicking on them. Also, for each point in a KML file, you can view it on the map which is at the bottom side of the software. Use the File > Save As option to export this KML file to GPX. Specify the name of output GPX file and location and it will save that for you. 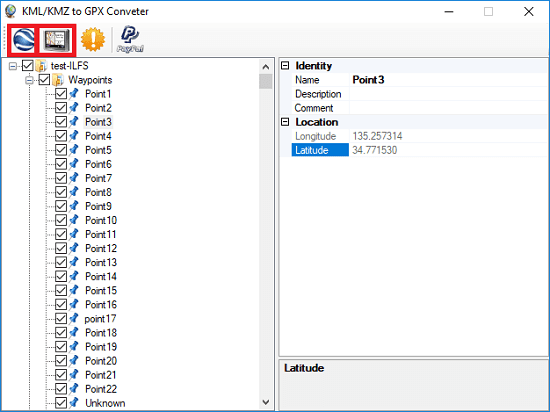 KML/KMZ to GPX Converter is yet another software that you can use on Windows. This is a simple and dedicated software to convert KML files to GPX. It shows the geographical information to you like latitude, longitude details and you can also edit some parameters like name, comments, and description. Apart from this, you can exclude some points from the KML file so they won’t be present in the final GPX file that this tool will export. There are no other options available that you can use. Just simply import a KML or KMZ file and export it to GPX.

It is pretty simple to use KML/KMZ to GPX Converter to convert a KML file to GPX. Just open the software and then import a KML file that you want to convert to GPX. Use the Google Earth icon to import a KML file and then it will list the coordinates from that. You can edit the coordinates parameters and also exclude some of them if you want. Finally, hit the GPS icon from the toolbar of the software to export the KML to GPX. It will ask you where you want to save the GPX file and you are done. Simple as that.

These are the best free KML to GPX converter software that I have found. You can use any of these tools to easily convert a KML file to GPX file in a few clicks whenever you want. All of them worked fine when it comes to converting KML to GPX. But, personally I like GPSBebel and GpsPrune to be the best free software for KML to GPX conversion. Also, if you want to use some simple tools, then ITN Converter and KML/KMZ to GPX Converter are good options.