OyVey is a free anonymous rant app on Android where you can view anonymous rants, share them and post your own rants. You can share whatever you feel like and there is no signup required. Unlike Whisper, the UI of OyVey is very simple with minimum functionality. OyVey doesn’t ask you to enter a username or a PIN to keep secrecy. Also, OyVey doesn’t track your posts on your end, which makes it difficult to identify the post origin even coming from the same device. The only thing that OyVey shows about a rant is the location it has been posted from. 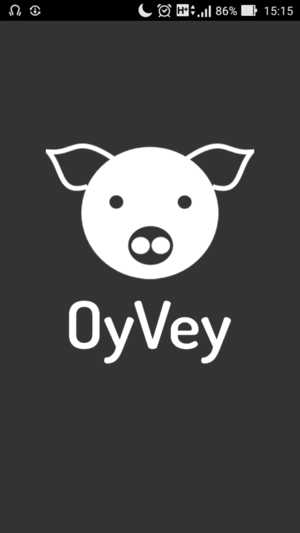 The USP of this app is that it maintains complete anonymity of the user’s rants, even from the user itself. It focuses on the posts that have been written recently. You can like and comment on an anonymous rant. Another feature of this app is that it is completely text based, with the exception of emojis. To some people it might come as a drawback but to others it makes it easier to use with minimum distractions.

So let’s start ranting! If you feel you’re done with the ranting, you can cheer yourself up with some cheerful music on StereoMood.

On OyVey, You won’t have to do much to post a rant or confession. Just open the app and a text box will be provided at the bottom. Here you can type in your rant and add emojis to your taste. These emojis are the same ones that Whatsapp provides.  Hit the chat button on the right to post it. You can also toggle the location on and off from the arrow button in the text box. 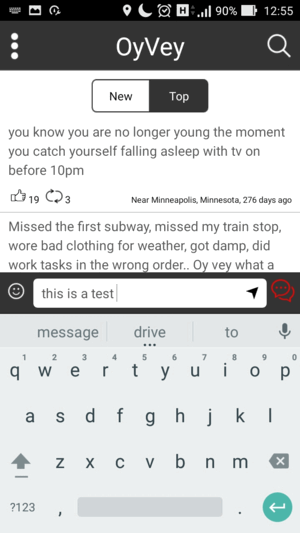 You can also add hashtags to highlight expressions or words in your post. You can notice there is no way to tell you have written a particular rant. This is a very good anonymity mechanism, but a downer for those who have problems in remembering things.

The main interface of this free anonymous rant app consists of a list of recent rants from people all around the world. The rants or confessions show the location and time when they were posted. The posts also show how many likes they have and the number of comments replied to them. You can swipe the interface down on top of the list to refresh the list of posts. 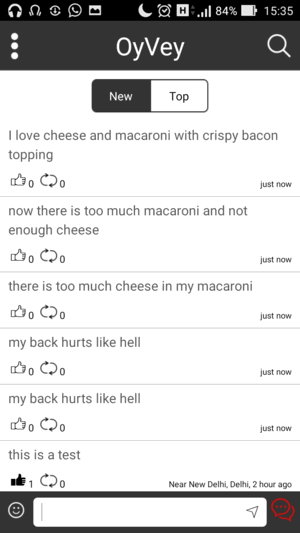 There are two tabs for the sake of browsing rants: Top and New. The Top tab shows the topmost liked and commented on rant. The New tab shows the most recent posts made. If you want to search about a certain post (maybe your own) you can search for them with the search bar on the top. A word of advice: using hashtags makes rants easily searchable.

To like a comment, hit the thumb button of a rant on the main interface. If you want to comment on a rant, open that rant and type in the reply as the comment.

OyVey is a really simple app that provides the basics of any confession/rant service. Since it is only text based, it should be more desirable to people who find picture posts distracting (like in Whisper). The only problem I had was when I had difficulty pressing the small ‘Like’ button on posts. I also hope that the developers add more functionality to it without sacrificing its simplicity. I give this free anonymous rant android app 4 stars.

You know a better alternative to OyVey? Do post it in the comments!