In this article, I have compiled a list of 5 free Control Center apps for Android. These apps bring the iOS-like Control Center straight to your Android phone which you can use to perform quick actions like turn on/off the flashlight, WiFi, Bluetooth, adjust the screen brightness, control the media volume, and many other things. Some of the Control Center apps even contain a music player control that can be used to play music quickly from the Control Center itself. The best part is that some of the apps can be used on the lock screen as well. This offers a great level of accessibility as you won’t have to unlock the screen to do quick actions. 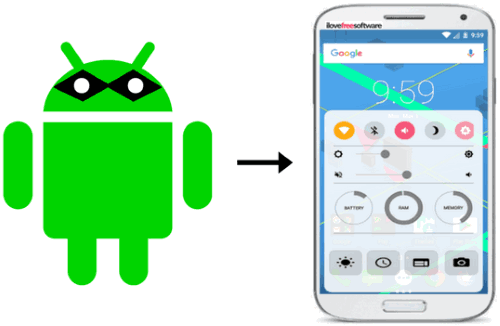 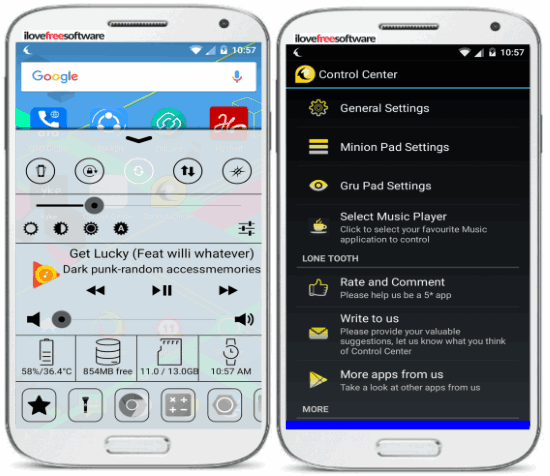 In Control Center, you will get the options to toggle WiFi on/off, Airplane mode, Bluetooth, Vibrate mode, Rotation lock, auto-sync, mobile data, and location from the Control Center, as you can see in the screenshot above. A swipe up from the bottom part of the screen will give you access to the Control Center. This swipe spot location can be changed to the right or left side of the screen. In addition to this, you can play and Control music right from the panel and adjust the media volume of the phone. Do note that you can’t use it from the Android lock screen. It has also got the options to set screen brightness level at preset levels or at a custom level as per your convenience. There are 4 different indicators in the Control center which display the battery temperature, free RAM memory status, SD card total and free storage, and current time. You can also add your favorites apps (up to 5) to quickly access them from this Control Center app. Tap on the “+” button and then select the app which then appears on the bottom panel of the app. If you want to change an app from the Control Center, then long tap on the app and then select the “Choose a new app” option. There is also a mini view which is the compact version of the Control center. It just shows the toggle buttons and hides other info and actions on the panel like music player control, battery temperature, RAM indicators, etc. The best part of the app is that it lets you choose the components that you want to see in your Control Center. From the app settings, you can choose to show/hide music control and the brightness control. 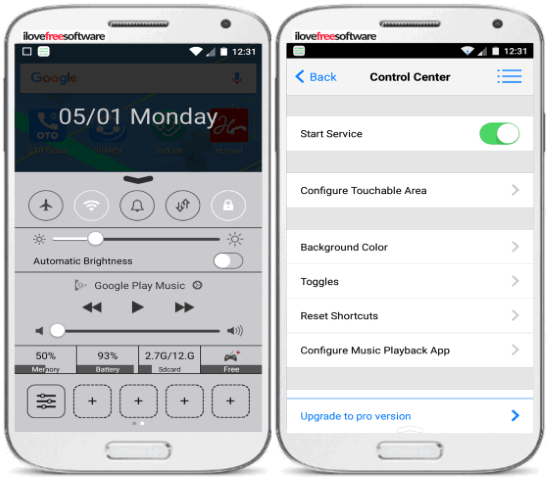 The Control Center will give you the option to toggle Airplane mode, WiFi, Sound mode, mobile data, auto-sync, rotation lock, vibration mode, Bluetooth, GPS, and adjust screen time-out. It also lets you adjust the screen brightness level and turn on Automatic Brightness mode of the phone. For music lovers, there is a music player control to play music from the Control Center. If you have multiple music players installed on your phone, then you can also select a default player for music playback. Tap on the Settings button that appears on the music player control to select the default music player app. Just like Control Center, it also shows 3 indicators to display the status of used RAM memory, battery percentage, and SD Card free and used storage space.

As I mentioned, you can also add apps on the Control Center to access them quickly. The app lets you add 9 different apps to the Control Center that can be accessed from its bottom-most panel. If you want to change any app later from the quick access, then long tap on it and then select an app from the popped out screen. 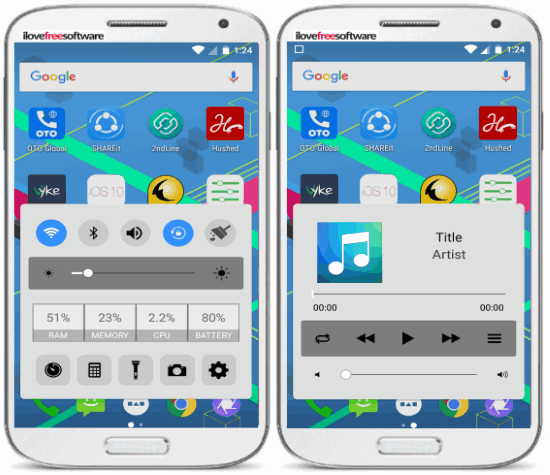 Control Center- Control Panel is another Control Center app for Android. This app offers 2 different Control Centers, one for quick actions like toggle WiFi, Bluetooth, and one for the music player, as you can see in the screenshot above. In addition to this, it has also got a phone booster option to close apps in the background to free up memory. After you have installed this app, you have to activate the “Enable iPhone Control” option from its settings. After that, you can access the Control Center with just a swipe up from the bottom of the screen. Unlike other Control Center apps on my list, it doesn’t let you change the swipe location to access the Control Center and add apps for quick access. Its quick action bar is also quite limited and just allows you to turn on/off WiFi, Bluetooth, Sound profile, rotation lock, and Phone booster. Apart from these actions, there are shortcuts to system apps to set an alarm, calculator, enable flashlight, open Camera, and Android settings. There is also a slider to adjust the screen brightness, and indicators to show RAM usage, CPU usage, battery percentage, etc. I find this app quite smooth and it didn’t lag during my testing. The interface is also very neat and clean. However, you can’t use it on the Android lock screen unlike Control Panel – Smart Toggle. 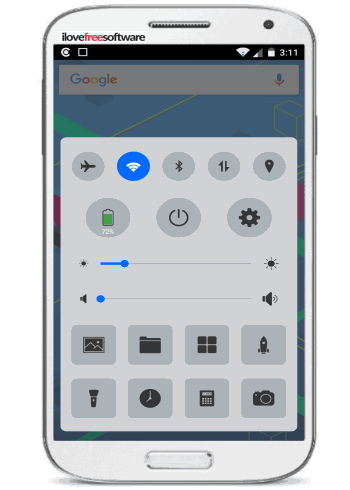 Control Center by Panda Brothers Studio is a free Android Control Center app. In its quick action panel at the top, you will find the options to toggle the Airplane mode, WiFi, Bluetooth, mobile data, and location. The main limitations of this control center app are that you can’t add apps for quick access, can’t change the swipe location to access the Control Center, and it can’t be used on the Android lock screen. Apart from that, it also has some advantages over others like it comes with a Memory Boost feature, you can open Gallery, File Manager, Clock, Calculator, Camera, and App Manager right from it. Well, you can also adjust the screen brightness level and media volume level of your phone. 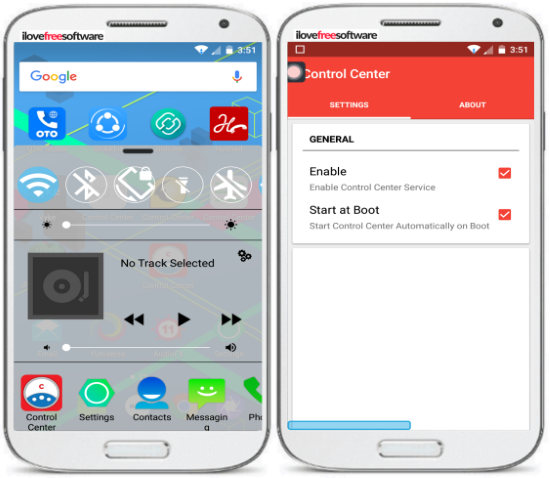