This is a cool new service started by Google where you can ask any one of the characters of Frozen movie to read a story to you. Frozen movie and its characters are quite popular among kids, specially the characters of Anna and Elsa. The first Frozen movie created such a big place for itself, that a second edition to that movie was recently released. It wouldn’t be wrong to say that kids of all ages like this movie. You can even find so much merchandise available in the stores related to the movie. Kids can go anywhere they still are able to locate these characters out of so many.

So having one of these Frozen movie characters tell you a short story sounds pretty awesome.

Let’s have a look at how you can ask characters of Frozen movie to tell you a story.

Simply open up your Google Assistant. This can be done by pressing and holding the center home button of your Android phone screen. When the Google Assistant comes up, then say “Hey Google, tell me a Frozen story“. 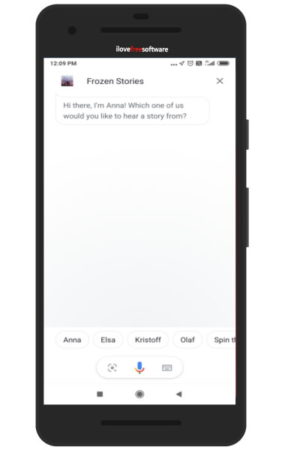 This would bring up the screen like the one shown in the screenshot above. You will be asked which character from Frozen would you like to hear the story from. You can either say the name out loud for the Google Assistant to hear or you can even tap on the name of the characters given at the bottom of the screen. 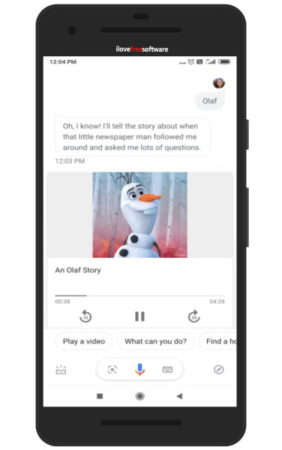 As soon as you make the selection the character you choose comes up on your screen. It will tell you a little about the story to be told and it will take a few seconds for the story to load. Then the story starts playing in your favorite characters voice, which you can hear. The above screenshot shows a story being narrated by Olaf. The story being told is only a few minutes long. So it can be a good option for a bedtime story as well.

You can try another story if your kids insist. Like the story in the above screenshot is being narrated by Elsa. Right now there are limited stories available with the Frozen characters. But more are being added, so that kids don’t hear repetitive stories everyday.

This is a pretty neat feature of the Google Assistant app. It will surely make your kids say wow in amazement. Because they love these characters and they see them on screen. Listening to their voices telling them a story would be a great deal for them. And this is a free feature of the Google Assistant app. So definitely give this a try and surprise your kids with stories from their favorite characters of Frozen.