Signo Tool is free hotkey manager software that automates functions and hotkeys so that you are more productive. This tool runs in your task tray quietly and unobtrusively allowing for multiple hotkey management such as open actions such as opening of the internet or files on your hard drive. It also allows for RAM actions which will lower RAM usage. Launch actions such as Windows or Dos commands are also supported. This will also allow you to use multiple text keys that start with #.such as auto actions such as auto correct.

But this is not all Signo does. This free software does so much more such as capture actions which allow you to draw on screen and capture the image, text actions such as copy and paste. Win actions such as snapping windows and hiding task bars are more of what this software can do. .POpen actions can also link hotkeys to files quickly and easily. A Start menu can have you running functions easily and quickly. You also have the option of HTML options such as automatically pasting content to the clipboard as well. This is just a short list of what this software can do for you. 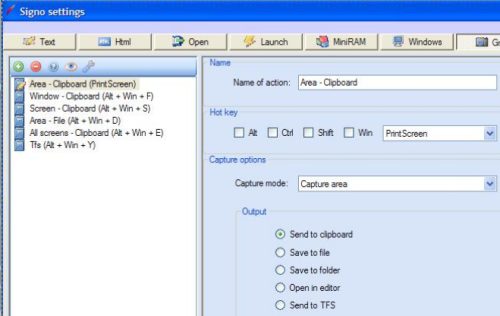 How to Install Signo:

Installation of Signo is easy. Simply click on the link and download. This version works with all versions of Windows since the 2000 release. It will also require .NET 2.0 or higher to also be installed on your computer. Once you have double clicked on the icon and installed the program you can launch it easily. This is a very simple and straightforward process to install and run your program. You may also make this portable by installing this on an external hard drive. Either way it will work for you and you will be more productive in no time.

If setting up hotkey is not your cup of tea, you can use a keystroke launcher, or one of these free application launchers.