It renders the web version of Google Keep on its interface and there is no other extended functionality, just a few shortcuts by which you can quickly switch Google Keep screens from taking notes, reminders, view archived notes. This also means that you cannot really use it offline. If you have already opened this desktop client, and then you disconnect internet, then you can still keep using it. You can see old notes visible on its interface, as well as add new notes. However, you won’t be able to close this application. Once you connect to the internet, it will sync your changes to Google Keep. 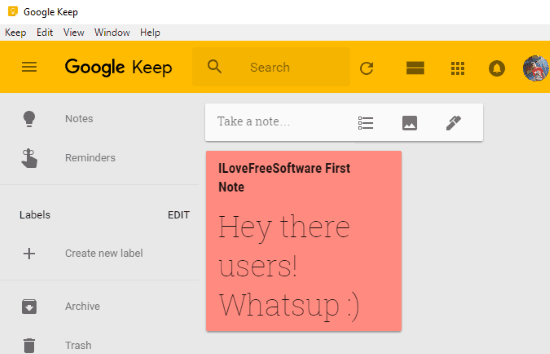 Google Keep is one of my favorite notes taking app and I use it a lot on my Android. It makes it pretty easy to organize my thoughts and keep all related info on the same place. But on PC, I was left with the option to either use its Chrome extension or a Firefox addon, which required me to open browsers even if I didn’t want to. Another alternative was to use its Chrome app but sooner or later Google is going to shut them down.

With this problem in mind, I set to find a desktop client to use Google Keep on my PC without having to use browsers and its short-life Chrome app. Luckily, I hit this GitHub project which eventually ended my search.

If you still don’t know, now you can add notes to Google Keep from Google Docs as well.

How to use this Google Keep desktop client for Windows:

Getting started with this Keep desktop app is very easy; just download it from the link at the end of this review and then extract the file anywhere on the PC. After that, run its EXE file and you will see its main interface, which prompts you to login with your Google account. After you have successfully logged in, it will render the web interface of Google Keep, as shown in the main screenshot above. You can then use Google Keep in the same manner as you usually do in its web version. As I said, if you have opened this desktop client and then your internet disconnects, then you can still keep using it. You can take notes, reminders, etc and also view them in the offline mode. The newly added reminders and notes are automatically synced to your Google account when you connect to the internet.

It also supports a bunch of hotkeys which allow you to quickly navigate to different screens of Google Keep, like Notes, Reminders, etc. Simply press “Control+1” to move to the Notes taking Google Keep screen, “Control+2” to Reminders, and so on. These hotkeys can be pressed anywhere on Keep, which will quickly take you to the associated screen with the hotkey.

keep is a free Windows desktop client for Google Keep which makes it pretty easy to take notes on Google Keep from PC. I will definitely recommend it to any Google Keep user who wants to jot down notes on Keep without using browsers. I really wish it was able to work truly offline, but I believe its inability to do that is because of some restrictions in Google Keep itself.