Carrom Lite is the Windows 8 Carrom Board Game. You can play the game against the computer or against a friend. The game ensures to engage you for hours. In this game, your aim is to get more points than your opponent.

You definitely are going to enjoy this game for sure, not just because of the mere fact that it is Carrom, which is one of the most famous board game, but also because the game rules are quite nice. Carrom Lite is freely available in the Games category of the Windows store. 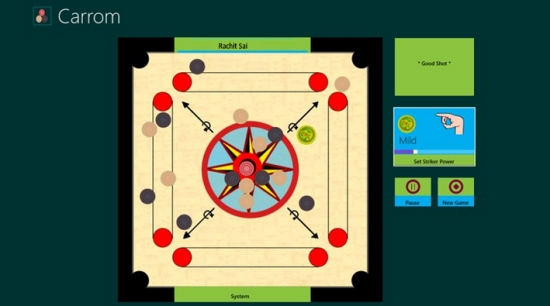 Game play of this Windows 8 Carrom Board Game

The game area will be shown as soon as you choose the game. A board will be shown to you from where you can start playing your game. It has a striker, a red colored ‘Queen’ coin, and some coins of two different colors. The rules of playing the game are:

Let me explain the controls of the game to you:

As you start the game, you will be first given the chance. Firstly, you have to set the position of the striker. A panel will be assigned to you by default. You can play using this panel only. On your chance, the striker would be placed in your panel. Drag the striker to the left or the right to set its position.

Set the direction of the striker 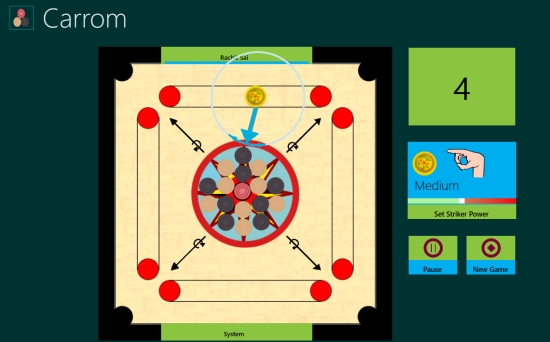 Click anywhere on the board to hit the target.

You can make the settings related to the game, like choosing the number of players, changing name of the players from the settings charm of Windows while the game is in progress.

My Verdict on Carrom Lite

According to my experience with this game, I think it is quite nice. The best thing about the game is that Carrom is one of the most famous board game. And due to that particular reason, I think it deserves a try. Keep posting me with your experience about this game.