Can You Escape – Holidays is a Windows 10 escape room game app where you have to solve puzzles and escape different holiday rooms. As we have covered previous versions of the Can You Escape games in this series, the game play of this game is also similar. You are locked in a room and you have to get out of it. For this you have to break code, solve puzzles to open doors.

The Windows 10 escape the room game app can be downloaded from the Windows 10 store or from the link given at the end of this article. When you start the app you will come across a familiar interface if you have played can you escape games before. The screenshot below shows the interface of this app. 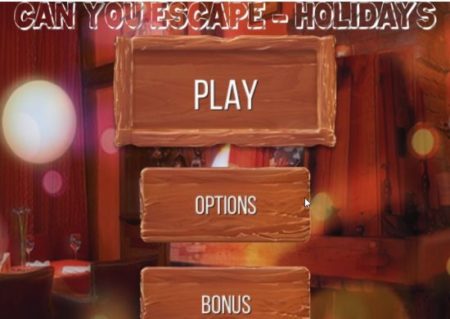 The home page app gives you options to go to settings and change a few things. There is also a tutorial which will help you understand the game play. The play button will take you to the levels screen, which can be seen in the screenshot below. 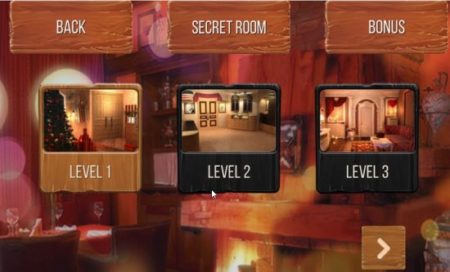 Start from level one and make your way through the other levels. When you click level one, you will see a screen like the one given below.

This is the first level of the game, and will be guided. You will see a dialogue box on the bottom right side prompting you what to do as well as areas that contain clues will be highlighted with a yellow glowing circle. The first level is the only one where you will get help, from the second level onwards you are on your own.

In the screenshot above you can also see some blank boxes towards the right of the app screen. These boxes are used to collect clues, which can be used on later in the game.

You have to move around the room you are trapped in and look for clues. Collect clues, solve puzzles and find a way get out of the room. The downside of the game app is that there is a video ad which plays after every cleared level. It does get annoying after a while.

There is a hints icon on the top right side of the app window. You can use this option when you are stuck somewhere and can’t find a way out. The hint option will play a video for you which will show you the solution of this particular level which you are stuck on.

Can You Escape – holidays is a fun game app where you have to move around the room to collect clues and then use them to solve puzzles. Solving puzzles will help you get out of the room. The game has awesome graphics. The only thing which bothered me was the videos ads that play after completion of each level. When you are so immersed in the game, you want to go and play the next level immediately. But then you get a video ad, which is kind of annoying.  Apart from this the game app is pretty good to have.

Check out Can You Escape – Holidays for Windows 10 here.