Though the cartoons are quite popular but the Windows 10 store has only four games on Tom and Jerry theme. All these games are free to download and play. Let’s look at the free Windows 10 Tom and Jerry games for kids below. 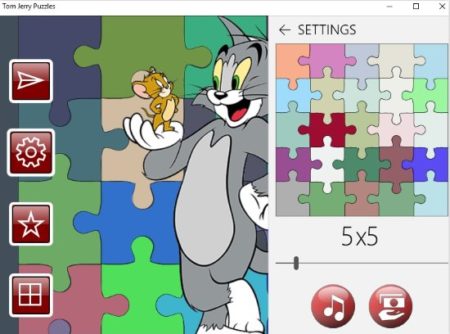 Tom Jerry Puzzles is a jigsaw puzzle game based on the Tom and Jerry theme. When you start the app you will see a interface like the one shown in the screenshot above. When you click on the settings gear icon on the left a window will open up which will let you select the number of pieces you want in your jigsaw puzzle, like shown in the above screenshot. Right now it shows a 5 x 5 grid, which you can easily change using the slider given. The play button at the top will start the game for you and will bring up a game window, like the one shown in the screenshot below. 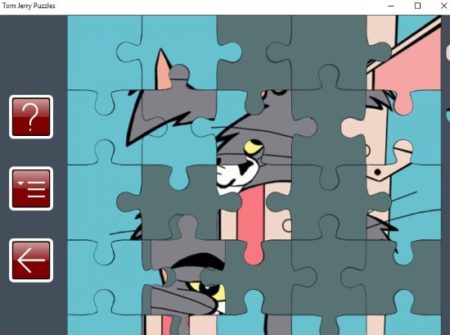 The center of the screen is where the puzzle pieces have to be placed, the right side of the screen will contain all the jumbled up pieces of the jigsaw puzzle, and towards the left side you will have options to go back, and a question mark icon which will offer you a hint for helping you out. Pick up pieces from the left and start placing them on the empty grid. Slowly you will be able to form the picture that you are looking for. 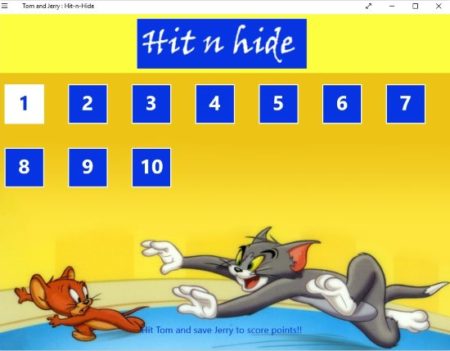 Tom and Jerry: Hit-n-Hide is another fun game to play. When you start this game you will see an interface like the one shown in the screenshot above. The game has 10 levels to play and each level increases in difficulty. When you click on level one you will have the game play screen in front of you, where you will have Tom and Jerry pictures which will continuously keep moving all over the board. Now your task is to click on the pictures of Tom and Jerry as quickly as possible before they move to a different location on the board. The game play interface can be seen in the screenshot below. 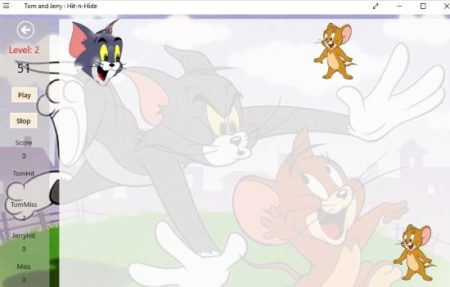 In the game you will see your score board on the left side. The top of the score board will display the level you are at and just below that is a timer which is running. The timer starts at 60 seconds and counts down to 0 from there. At 0 seconds the game time is over and your final score is displayed. Below the timer you have two button to play and stop the game. Below the buttons your score is displayed along with the numbers of hits and misses. 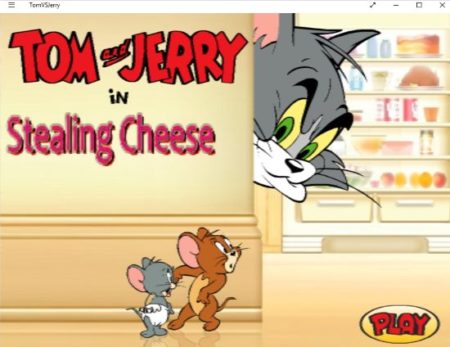 Tom VS Jerry is the most fun game app in this list. The game starts with an interface like the one shown in the screenshot above. In this game Jerry and his friend Nibbles are trying to steal cheese from Tom. Now Tom has to stop them from doing so. Tom has water balloons which he has to throw on Jerry and Nibbles to stop them. To get a better picture of the game, look at the game play screen in the screenshot below. 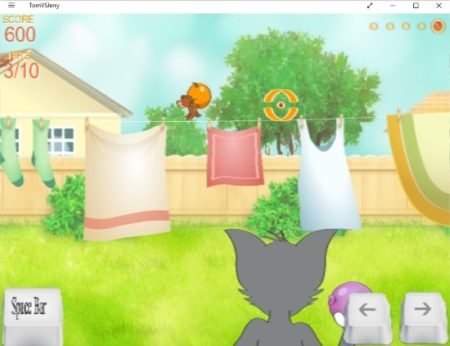 As you can see Jerry and Nibbles will be running across on the wire and Tom who is standing a little far has to throw water balloons at them to stop them. For aiming you can use the arrow keys on your computer and for throwing the balloon use the space bar. Make sure you aim properly before hitting, because you will get only 5 chances, after 5 misses its game over for you. You also have to keep in mind that the balloon takes some time to travel towards the mouse as well, so shoot a little ahead on the bulls eye that you have pointed using the arrow keys. 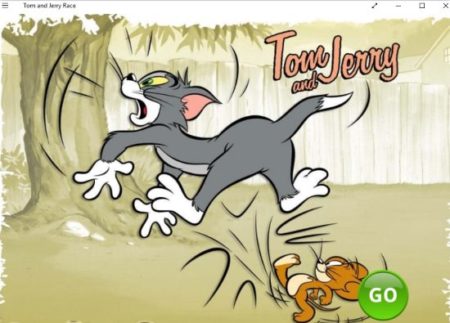 Tom and Jerry Race is the last game in this list. In this game you will start with an interface like the one shown in the screenshot above. On this screen just click the go button to start the game. The game play screen is displayed in the screenshot below. 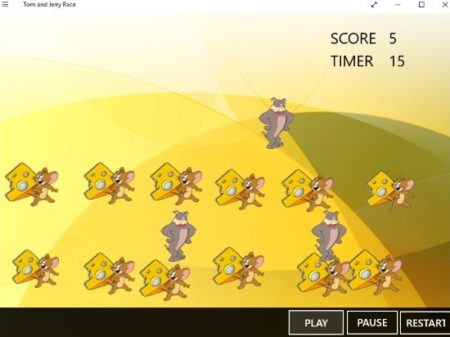 In this game when you click the play button, all the pictures of the mouse and dog will start moving on the board in a random manner. Now your task is to click on all the mouse pictures to make them disappear one by one. The game has a timer and you get only 15 seconds to complete this task. Clicking a mouse picture will make the mouse disappear from the board. The timer and your score will be displayed on the top of the window on the right side. You will get three button on the page at the bottom which are play, pause, and restart. So hit the play button and get clicking.

So these are the 4 free Windows 10 Tom and Jerry games for kids. All the games are quite fun to play. But the one I like the most was Tom VS Jerry, the game is quite fun with cute graphics and sound. The aiming and throwing of water balloons on Jerry and his friend feel like you are in the cartoon yourself. I enjoyed playing this game the most. So go ahead and try all these games out and see which ones you like the most.