This article covers 4 free Android apps to create moving photos. A moving photo contains a looped animation that gives it a moving effect. Creating a moving photo is simpler than it sounds. All you have to do is choose a photo, add moving effects, and export. Since the output is not a static image anymore, you can save it as either video or GIF.

The 4 free moving photo creator apps covered here has almost the same procedure to create moving photos. Each app has a set of tools to select which part of the image you want to animate and which you want still. Each of these apps has the same tools with slightly different names. Some apps also offer additional features such as overlay, cut, crop, filter, etc. With these apps, you can create precise moving photos which look stunning and real and export the final output to your phone or share directly on social media.

Also read: How to Turn Photos into Animated Emoji 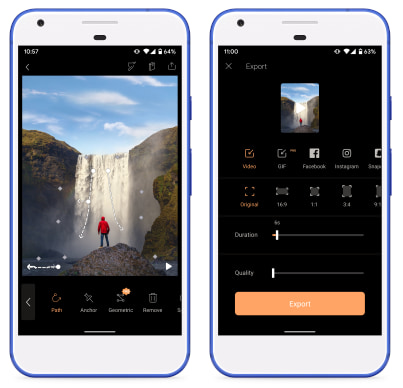 Enlight Pixaloop is one of the best moving photo creator apps on the Play Store. When you open this app for the first time, it takes you through a tutorial explaining how to create moving photos. After the tutorial, you can create a new project and load your still image. Then, you can use the following tools from Animate option to add moving effect to your photo:

Apart from moving effect, this app also features sky effects, camera FX, and overlays. The free version of this app lets you create moving photos and export them to as a 1080p video file in various aspect ratio. While exporting, you can also adjust the duration and quality of the video. This app can also export moving photo as a GIF file but that’s a PRO feature. 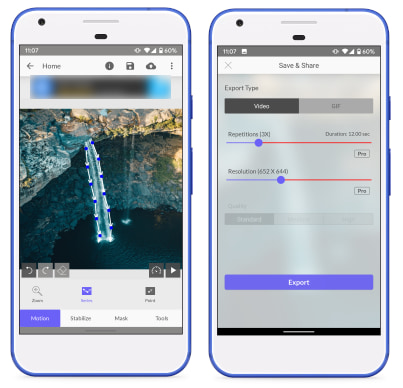 StoryZ is another free app to create moving photos on an Android phone. This app works like a social media app where you can share your moving photos and browse other people’s work. To create a moving photo, simply tap the + button in the bottom center. Doing this shows you four effects you can create with this app; Ripple, Overlay, Effects, and Motion.

Select the Ripple option and add your photo to the editor. Once you add the photo, it prompts an optional crop/rotate option. After that, it loads your photo in the editor where you can add a series of points to add motion to the photo. In the same way, you can stabilize the nearby area for a fluent effect. Apart from that, you can also loop the effect and add filters on top. Once done, you can export the results in the form of HD video or GIF. To push the quality beyond HD, you are going to need the Pro plan of the app. 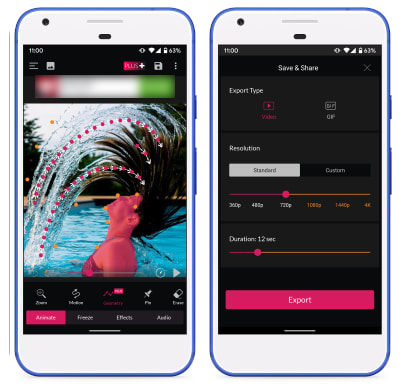 PixaMotion is another free Android app that changes your still photo into moving one. The overall process is same as rest of the apps. When you open this app, it prompts you to load your photo right away. Then it takes you to an optional step to crop/rotate the photo before opening it in the editor. You can crop and rotate your photo here or skip this step altogether.

The editor has all the tools laying at the bottom section. To create a moving animation, select the Animate tab, choose the Motion and draw the points to the direction in which you want to create motion. To fine-tune the effect, go to the Freeze tab and mark the extra area that either got distorted by the motion or in the middle of the motion. At this point, your moving photo is done. Additionally, you can add looping along with effects, filters, and camera FX. Once you are done, you can save the result with as an HD video or a medium quality GIF. In the case of video output, you get an option to add background music as well.

Give this moving photo maker app a try here. 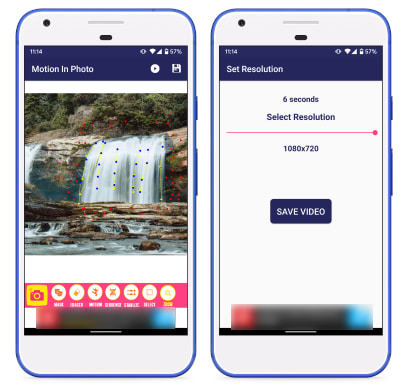 Last, but not least, Photo In Motion is a free app to create moving photos on Android. This is one of the simplest apps on this list. It has a clean and minimal-looking UI and creates moving animation only, no filters, no background sound, nothing.

This app has all the tools at the bottom of the screen with a canvas for the photo in the middle. To create a motion effect, first, select the Sequence tool and draw a sequence in the direction of motion. Then, select the Motion tool and draw the boundaries on either side of the sequence in the same direction. This creates a motion effect on the selected section of the photo. After that, you can use the Stabilize tool to set stabilization points to prevent them from being displaced by arrows. Once done, you can preview the results and export to 6-second long HD video.

You can download this moving photo maker app here.

These are the 4 free moving photo creator apps for Android. With the help of these apps, you can easily turn your still photos into moving ones and also add filters on top. I personally like Pixaloop because it satisfies all my needs. Depending on what you need, you can try them out and see which one fits you the best.