CPU/GPU Meter & Notification is a free Android app to monitor CPU and GPU usage. The best part of this app is that you can use it to see GPU usage and clock speed right from the notification area. So, next time you are playing a game and want to know how much load your phone GPU can take, you can simply swipe down to bring forth notification panel and get this information.

Within this app, you can see a real-time GPU usage graph, as shown below. Also, you can see the current and maximum frequency of the GPU. It would have been a lot better if the app provided a widget that I could simply add to my homescreen to monitor the GPU usage or overlay real-time GPU info on Android screen so that I could see how much GPU is used when I play my favorite games. But still, it does a good job and is a pretty simple app to see GPU usage in real-time from the Android notification panel. Meanwhile, you can also check out these free Android system information viewer apps to know more about GPU of your phone. 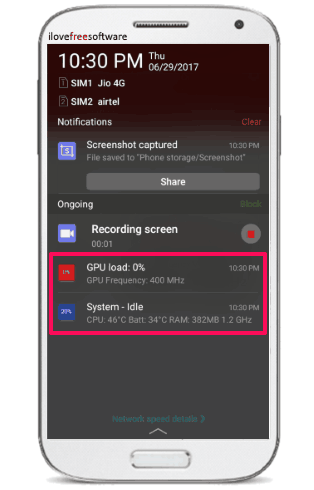 How to use this free GPU monitoring Android app:

Download it from the link at the end of this review and then open that app. On the main screen, there are 2 sections: one for the CPU and the other for the GPU. Both of these sections display a real-time graph which displays their usage. To view a real-time GPU usage graph, switch to the GPU section as shown in the screenshot below. 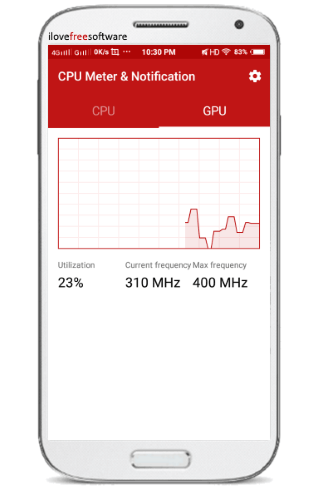 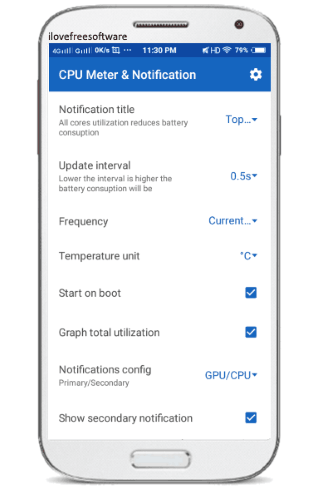