Shared Impressions, is a free Windows 8 photo album, using which you can create a cool looking modern photo album of the photos from SkyDrive or photos stored locally in your Windows 8 devices. The app provides a set of inbuilt templates; which you can use as the photo book, and then add as many photos as you want, and add some really cool photo effects on them. Plus the app also lets you add your favorite song as the background to the album, so that when you play the slide show, the matching song also plays in the background. Making the album more beautiful and more charming.

Also, if you want you can separately add background music to a particular photo, and making it stand out from the rest and add more details to the photos such as a suitable title, caption, the location where it was taken, url etc. 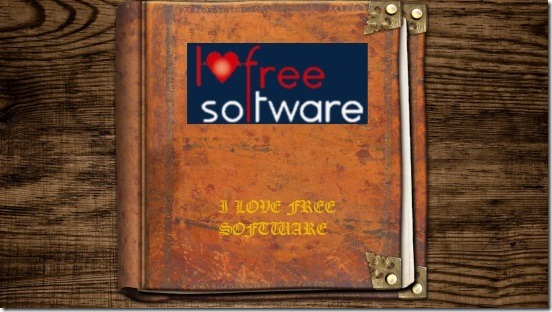 And finally when you have got the album made, you can then watch it’s slideshow in the app and share them with friends. This is a great Windows 8 photo album app that helps you to connect more with your close ones and reminds you that they mean something to you.

The app certainly is a handy Windows 8 app. It’s fast, functional, very easy to use, and not to forget, it has got a great looking UI. Building up a photo album in the app is very easy. Also the app automatically saves whatever albums you start creating in the app, hence releasing you from manually saving them. And if in case you didn’t like the album; you can edit or delete them anytime. All the albums created in the app is shown at the Home screen of the app. Which you can group (sort) by location, year, title, and color.

The ease of use and the actuality that how quickly you can create a photo album are some of the plus points of the app, and you’ll realize this the moment you open the app. There are two big buttons for Create Album and Import Album; making it very clear to click on requisite to do desired. Also if you right-click on this screen then you’ll get a flyout at the bottom of screen containing: Slide Show, Open Album, Edit album, Delete album, Export album, Group by, Create album, and Import album. 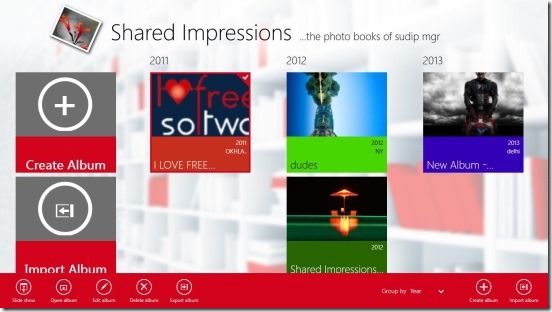 Simply click on Create album button to start creating the album. The app creates albums on the basis of year. You can give a suitable title to album, location, add keywords (captions), give album color, add favorite background music. All these fields and buttons helps you in making the album more personalized and viewers connect more to the album when they watch slide show. Once you fill all these fields, simply click on the arrow at the right end of screen. Doing this move you forward, and gives option to add photos. 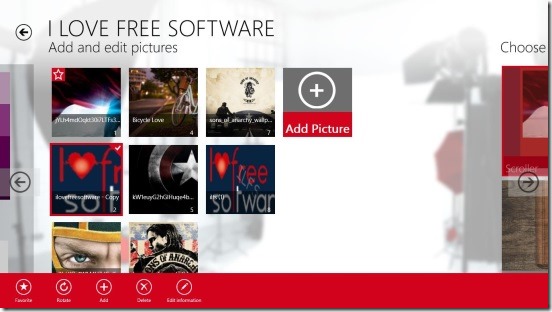 Once you have added photos, you can choose the one that’ll be the cover photo of the album. Simply select the desired photo from added ones by right clicking on it, and then click on Favorite button present on bottom flyout. This flyout also consists of other buttons, including: rotate, add, delete, and edit information. If you click on Edit information, you can give more details to each added photo, and select music for each photo separately. 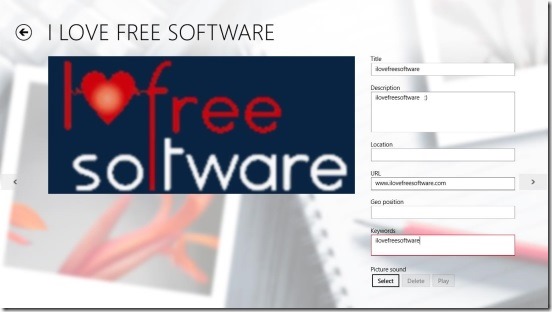 Once you are done with everything, click on right arrow button again. Doing this gives you 3 album templates to choose from. The beauty of these templates is, not only it makes a cool album but also lets you choose layouts (more like effects) for the album. Each template has it’s own set of layouts, hence, giving you more options to choose from. 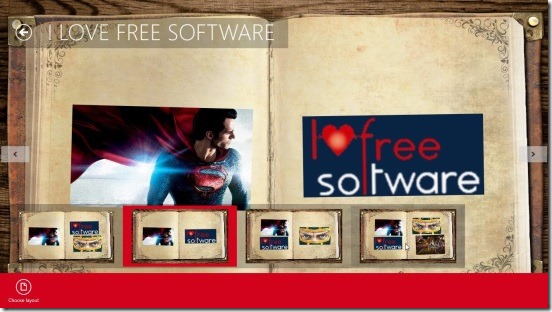 Once you have everything done, simply click back arrow button at top left corner of screen. The app automatically saves the album in it’s cloud. You can then later watch a slide show or export it in .album file format.

Don’t forget to check out this Windows 8 Photo Uploader for Facebook app to edit, upload photos to Facebook directly.