This article explains how to display subtitles in 2 languages on YouTube videos. Dual Caption is an open-source web browser extension for Google Chrome that can simultaneously show 2 captions on YouTube videos. YouTube can show one caption on video and with this extension, you can add the second one as well. Both captions appear next to each other. YouTube’s default caption appears on its usual position at the bottom of the player. And with this extension, the second caption appears just below that.

In order to display 2 captions at the same time, the video should have two subtitles available. If the video doesn’t have the second subtitle, you can use the auto-translate feature of YouTube to create the second subtitle. This way, combined with YouTube caption translation, you can display dual captions on almost any YouTube video. So, let’s see how it’s done.

Dual-Caption is designed for Google Chrome and it works with other Chromium-based browsers as well. You can either get this extension from the Chrome Web Store or download the CRX extension file from GitHub and add it manually to your browser. Once added, simply tap the extension icon from the address bar. This opens the extension options where you can toggle it on. Doing this shows the extension overly on top of the YouTube player. The overly contains a button to add the second subtitle along with options to bookmark the current caption, copy to clipboard. and access the bookmarked captions. 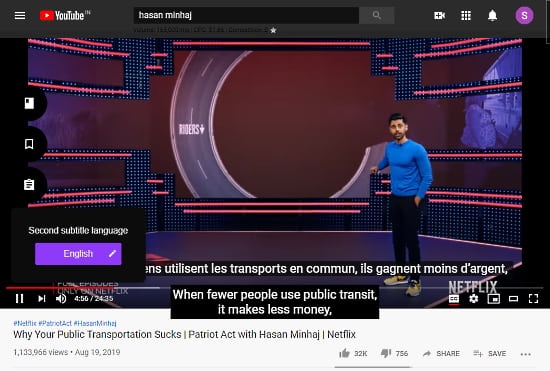 Tapping the second subtitle button from the overly shows a list of available subtitles. If a YouTube video has multiple subtitles available, it appears on the list and you can select one in extension and one in YouTube player. YouTube’s default caption appears at its usual position followed by the second caption below it.

You can also use this extension with videos that have no or one subtitle. To do that, open the YouTube caption and translate the subtitle (or auto-generated caption) to the desired language (using YouTube caption translation). The translated subtitle does not appear in this extension. So, select the translated caption on YouTube and choose the original caption in the extension. This way, you can get two captions on videos with no/one subtitle. 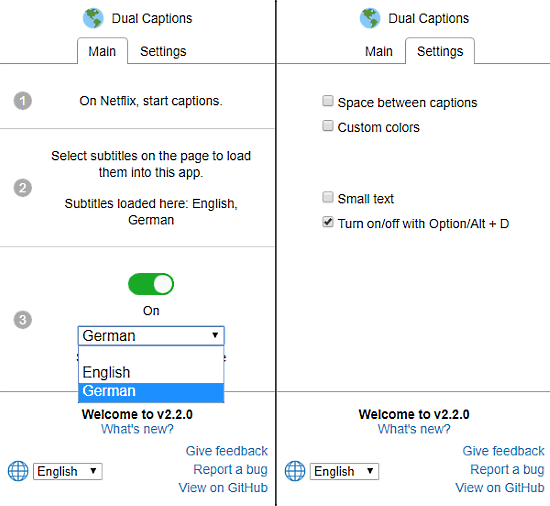 With Dual Caption, you can easily display 2 captions on all YouTube video that has multiple subtitles. You can also make it work for video with one or no subtitle. This is good for learning and practicing new languages. You can enable dual caption with the language you’re learning along with the language you already know. Then, you can practice the language while getting entertained at the same time. And, the options to bookmark and copy the current caption makes it even better. Do note that the bookmark and copy option are for the extension subtitle only.