If the person you’re currently recording doesn’t have VodBurner, a watermark will be added to your video. However, if any of the users have paid subscription to the program the watermark won’t be present.

It’s also important to note that if you’re planning to use VodBurner you should notify the other person and have his/her consent to record. Unfortunately, VodBurner doesn’t automatically notify that you’re being recorded yet.

A skype video call recorded by VodBurner will rarely lose any quality unless you choose to do so.

VodBurner is the perfect application for those that for some reason need to record a skype video conference to watch it later on or publish it somewhere. 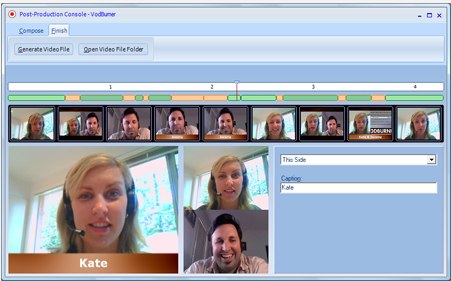 How To Use VodBurner to Record Skype Video Calls:

As previously mentioned, in order to use VodBurner you need Skype. After downloading skype you can install VodBurner and then it should be ready to be used.

VodBurner has an intuitive interface and it can be used by anyone who wishes to do so.

To record a skype video conference all one needs to do is click “record” on VodBurner’s panel. The recording can be paused at any given time and be resumed later on without any losses.

If you just want to record audio call in Skype, you can use Free MP3 Skype Call Recorder.