This is a free driving game provided by New York Times to see how easily you are distracted while you are driving. The game is aimed at waking the masses about their delusion that multitasking is possible while driving. This free driving game gives the player a tour on what it’s like to text while driving. The game also generates a result based on your performance and tells you how much likely you are to crash your car while texting.

Multitasking while driving includes texting, computing, talking on the phone, etc. The greatest problem is that people are confident that they’re really good at multitasking while driving. Well sorry to break it to them, they’re absolutely wrong.  According to a study by University of Utah, people talking on cell phones contribute 21% of total car crashes in USA. Also, people talking on the phone have slower reaction time than drunk drivers. Surprising, isn’t it? 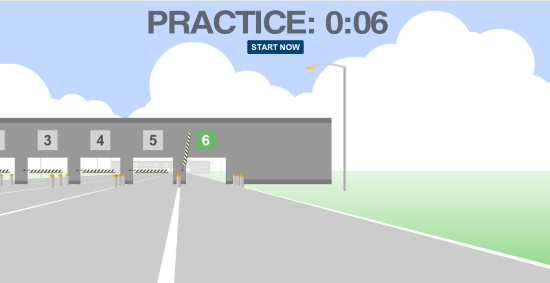 This free driving game tries to illustrate all of the above in a simple keyboard and mouse based game. In this game, you’ll have to be very attentive and try to work a short reaction time. The game will throw random phone based events which you’ll have to attend while driving. So buckle up and open keep your eyes wide open. You can be extra careful on the road with iOnRoad Android App that warns you of risks you might face while driving.

How to Test your Distraction on this Driving Game 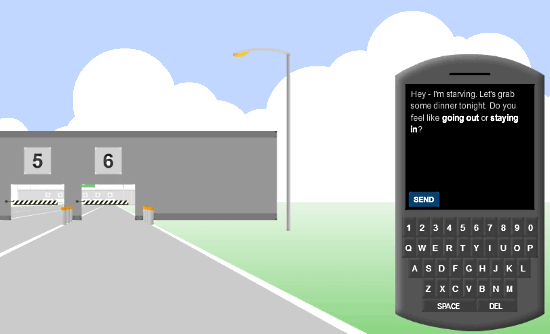 Open the link provided at the end of this article to go to the game. Click on Start Game to start the game and you’ll find yourself zooming on the road in one of 6 lanes through checkpoints. Move your car through the lanes with keys 1 to 6 on your keyboard. You’ll have to use an open lane as signaled by the green lane number on the checkpoints. Sometimes you might also see the open lane number on a road sign above, so keep your eyes open. After some checkpoints, you’ll receive a text where you’ll be asked to pick between multiple bolded choices. You have to write the choice using your mouse on the phone’s keypad while paying attention to the road. After a few texts, the game will end and it will show you a result of your performance.

How to Analyze the Result of the Test

The result will show you a graph of the gates you’ve passed/missed versus the reaction time of your responses. It’ll tell you how slow your reaction time is while texting and how many gates you have missed. It also shows you the average result of users that have took this test. The graph will enumerate all the gates, the faded red bars are the gates you passed while not texting. The red bars signify gates passed while texting and the brown ones are the gates you’ve missed. You can use this info to reflect on your driving habits. While playing the game, if you happen to see a grey lady undistracted, then kudos to you!

Do you know more emulation games just like this one? Make sure to post it in the comments!