Nintendo Entertainment System (NES) is an 8-bit home video game console which was initially released in Japan in 1983 as Famicom. Later, it was released in US, Europe, and Australia in the following years and got the NES name. It was a huge success and became the iconic console in the history of video games. NES is discounted in 1995 after the release of its successor, Super Nintendo Entertainment System. The console is discontinued long ago but you can still play all its games on your Windows computer.

Most of the features are common among all these emulators. I will cover the main highlights of these emulators here. All these NES emulators require NES ROMs (.nes) game files to run the respective games. You can download NES ROMs games from here. 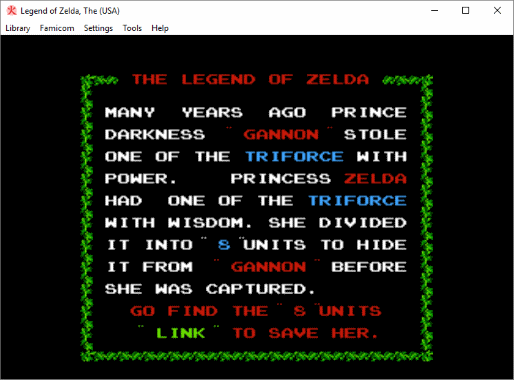 Whenever you play a game in this emulator, a button to the respective game console options is added to the toolbar at the top. As you can see in the attached screenshot, its showing Famicom. This button gives you access to all the physical buttons on an NES, like Soft Reset, Unload, Controllers, etc. In the Settings, you can adjust the video and audio settings as you like. You can change the video scale and do color adjustments as per your like. You can also map the original NES gamepad buttons to your keyboard and set hotkeys for quick actions. This NES emulator also has a Cheat Editor where you can store cheat codes for various games. 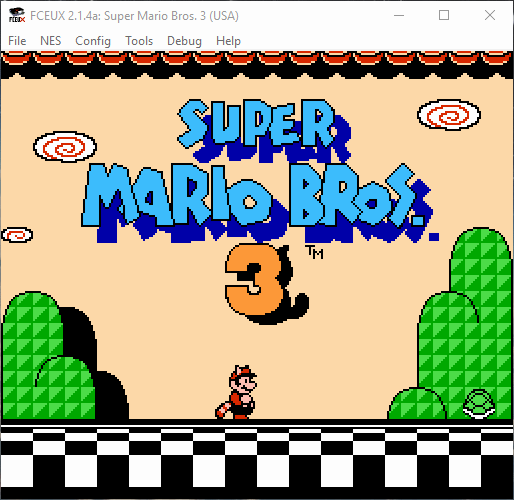 FCEUX is a feature-pack NES emulator for power users. This emulator supports NTSC, PAL, and NTSC-PAL hybrid color encoding modes. The main highlight of this emulator is that you can record gameplay video and audio while playing. It also lets you save your current game-state which you can load later. You can save multiple game-state of your current game and load any of them whenever you want. This emulator also supports NetPlay, means you can connect to a server and play games locally with others.

Apart from that, you can adjust all audio and video settings and control the emulation speed. It has built-in frame counter and lag counter as well. FCEUX has some useful tools for developers and power users. These tools allow you to make changes in the ROM files and automatically apply scripts and cheats in the game. There are many other useful tools and features in this emulator, give it a try and check them out yourself. 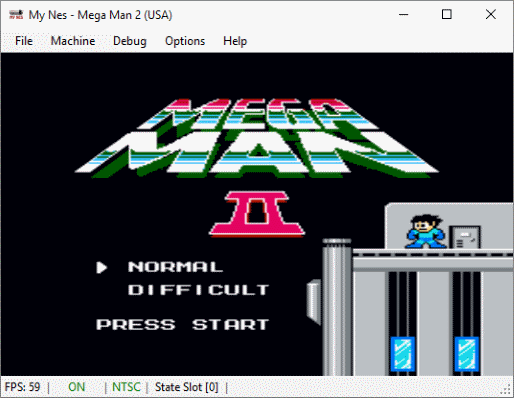 MyNES is a powerful yet simple open source Nintendo Entertainment System emulator. This emulator has 10 state slot to save your game-states. When you run a game in this emulator, it shows you the current frame rate, game-state slot, and color encoding mode at the bottom of the screen. You can change the color encoding mode as per your requirement. It does not have gameplay video recording option but you can record the audio if you want. Like other emulators, you can adjust the video and audio settings. This emulator lets you create various game control profiles with different key mappings. Under the Debugging options, you can enable command console where you can dump specific memory range and CPU registers. 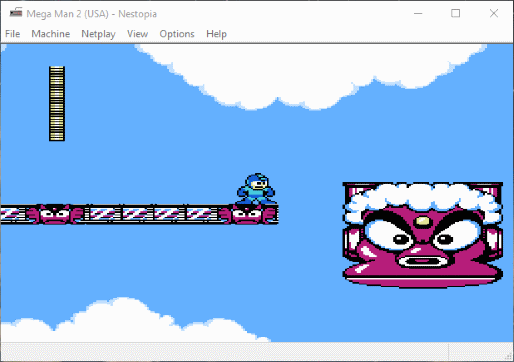 The next Nintendo Entertainment System emulator on this list is Nestopia. This emulator has all the features you can expect from an NES emulator. It has a built-in video player that can record and play your gameplay videos. Some of the other features of this emulator are framerate count, save game-state, screenshot, and NetPlay.

The main highlight of this emulator is automatic cheat load and save support. You can save a cheat code file for particular games which will be automatically loaded when you play the respective game. You can also adjust the speed of the emulator and play games at higher or slower speed. 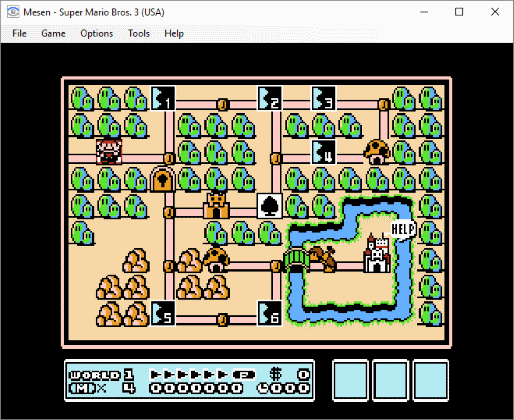 Another free NES emulator on this list is Mensen. This emulator packs almost all features you can expect from an NES emulator in a simple and clean user interface. It has 5 game state slots where you can save your game progress and load that back whenever you want. You can connect it to a local server to play games with others. You can record your gameplay movie and sound and take screenshots with a hotkey. This emulator has a cheat code database; you can load cheat codes and create new with its Cheat Finder tool.

This emulator lets you adjust the emulation speed; you can increase/decrease the speed by up to 300% here. You can also change the video size independent of your screen size. Then there are video filters which I think is the best feature of this emulator. These video filters change the game quality drastically. They make the retro 8-bit game look crystal clear. 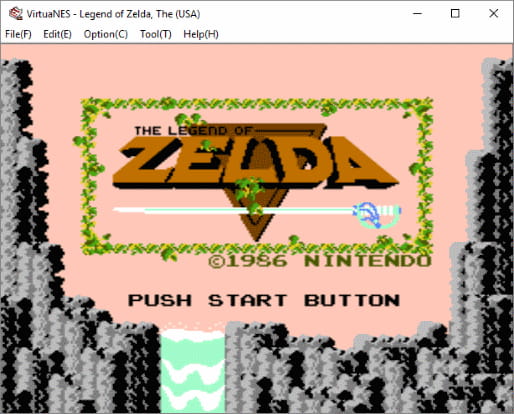 VirtualNES is another free Nintendo Entertainment System emulator for Windows. It supports quick game save and load with hotkeys. You get 10 slots to save your game progress here. It also has NetPlay support where you can connect to a local server and play games with others. While playing games in this emulator, you can record your gameplay and replay it in the emulator itself.

This emulator lets you create up to 8 different controller profiles which you can easily switch from the Edit menu. This feature can be very useful while you play games with others. Players can quickly switch controller profile to use their personalized control configurations. Similarly, you can create cheat code sheet and toggle it instantly from the Tool menu. These quick toggles make this emulator stand out from the rest. 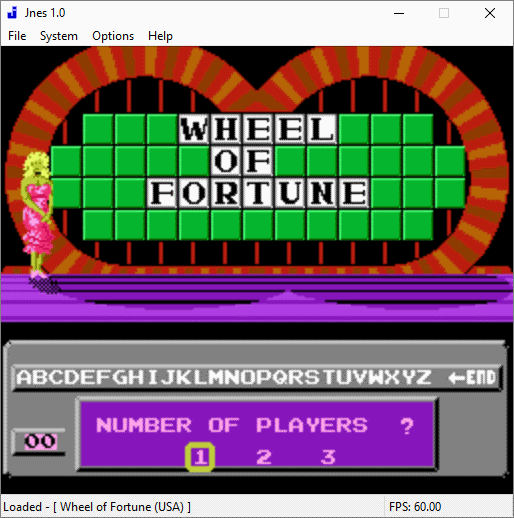 The next NES emulator on this list is JNES. Unlike other emulators, it’s not portable. When you download this emulator, you get an executable file which you can install on your Windows PC. This is a simple NES emulator with limited features that an average user needs. These limited features include frame count, color encoding modes, game state slots and options to capture image, sound, and movie. It saves your gameplay video in the .jmv format which you can play in this emulator. The main highlight of this emulator is its cheat mode. Unlike others, you don’t have to enter cheat codes manually here. It automatically loads all the cheat codes of the current game. You can easily toggle those cheat codes from the Cheat section. 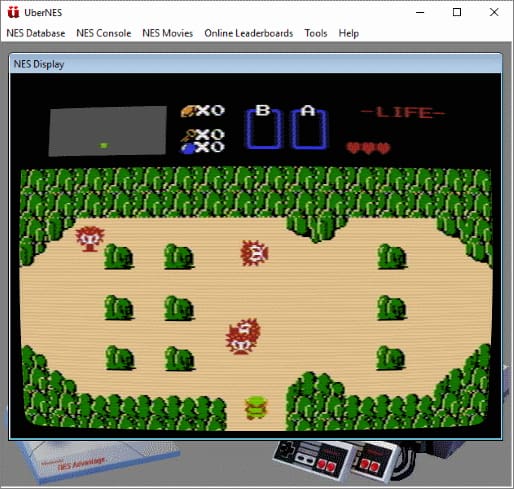 UberNES is a free NES emulator for Windows with online leaderboards. Online leaderboards feature lets you connect with a server where you can load the leaderboard stats and compete with others. Apart from that, all the other features are common with the other emulators on this list. In this emulator, you can create your NES database and save your ROM files, game-states, stats, and cheat files. It also has a movie player that lets you record and play gameplay videos.

These are the 8 free NES emulators which you can run on a Windows PC. Features like video-audio recording, screenshot, save game-state, color encoding modes, NetPlay, etc. are common among most of these emulators. Try them yourself and share your opinions with us in the comments.