This article covers an open-source note-taking alternative to Evernote for programmers. Boostnote is a cross-platform note-taking app for programmers. If you have used Evernote before, you might find the UI and features of this app quite familiar. It has a 3-column UI. The first column indexes all the storage locations along with starred notes, trash, and note tags. The second column lists all the notes under the selected section from the first column. And, the third column has the editor to write down the notes.

Being a note-taking app for programmers, it lets you create two types of notes: Markdown and Snippets. When you create a new note, it asks you what type of note you want to write and opens the respective editor based on your selection. After creating a note, you can export it to a TXT, MD, HTML, or PDF file. You can import notes from the same file types as well. On top of that, you can backup the entire database to a local directory or connect with third-party cloud storage for the cloud sync.

Apart from that, it has all the note management perks of Evernote which are handy to organize the notes. It also has a handful of keyboard shortcuts which you can customize along with the interface of the app. With that said, let’s check it out in details.

Boostnote is available as a desktop app for Windows, macOS, and Linux. It doesn’t need you to sign up or create an account. You can just download the app for your desktop, install it, and start taking notes.

Initially, it has 2 demo notes; one Markdown and one snippet. You can browse these notes to understand the functionalities of this app. From the top of the second column, you can create a new note which prompts you to select what type of note you want to create. 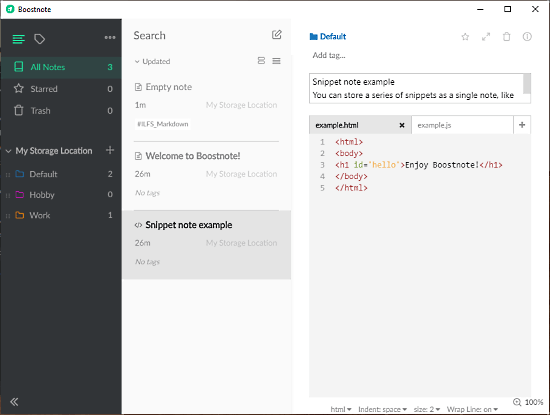 Snippet note is just like a regular code snippet but an option to bundle multiple code snippets in a single note. The snippet editor has tabs on the top from where you can add as many tabs as you want and save snippets in over 100 programming languages. This app also gives you an option to change the indent to either space or tab along with a font size option and word wrap toggle. You can simply add a new tab, select the programming language and save the code. 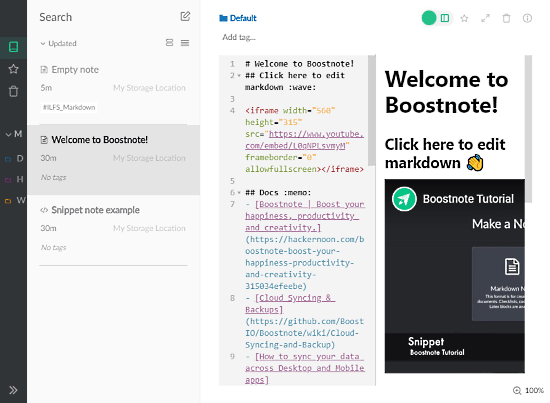 In the case of Markdown note, you can simply add your Markdown code to the editor. Then, you can toggle the preview mode from the top which shows a live preview of the Markdown side by side. This way, you can save Markdown with preview. 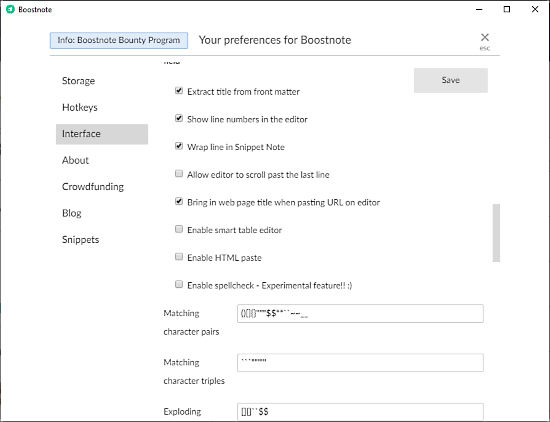 Get this note-taking Evernote alternative for programmers here.