AE 3D Moto – The Lost City, is a free Windows 8 bike racing game. It is a free 3D game app for Windows 8. The objective of the game is to ride the motorcycle for as long as possible, until you don’t fall off the bike. Remember Temple Run! The game is some what similar to that, but with different environments and of course motorcycles. While riding the bike you also have to collect as many coins and power ups as possible. This helps in unlocking bikes, powers and items.

If you love 3d racing games and more than that motorcycles, then this is the app for you. This Windows 8 bike racing game is available under the Games Category in Windows Store. Use the Windows 8 search charm to locate the app, or click on the download link given at the end of this article. 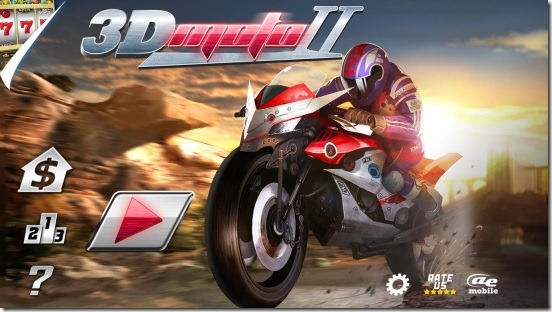 As a free racing game, this Windows 8 bike racing game sure is fun. The game is in 3D and the graphics are good, also the sound is quite okay. The gameplay is very good. You’ll start on road which is at first empty, but slowly gets crowded with trucks, cars, and buses etc. These all are basically the obstacles, that stand on your way and block you from achieving high score. All you have do is dodge these obstacles, by turning left or right, and grab as many coins and power ups as possible. Grabbing these coins helps you get to the highest score, and different power-ups helps in grabbing the coins easily. Also overtaking the vehicles adds few but countable points to your score. Following is a screen shot of the gameplay. 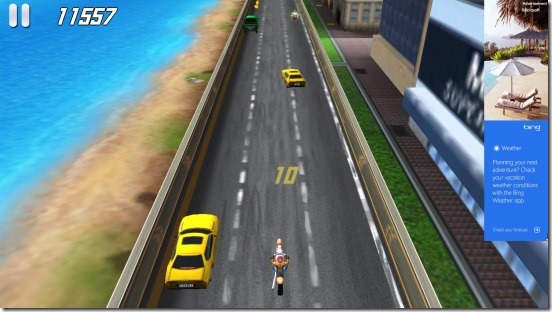 All the power-ups works in a similar way as the powers in Temple Run do. They all have limited time, and last for a limited time period. Each power up adds different abilities to your bike, for example Magnet, which automatically attracts the nearby coins, the siren power clears a specific part of the road ahead of you, and many more. All of these are present in the Shop screen within the app. You can go to the Shop screen by clicking on the $ button in the Main Screen. 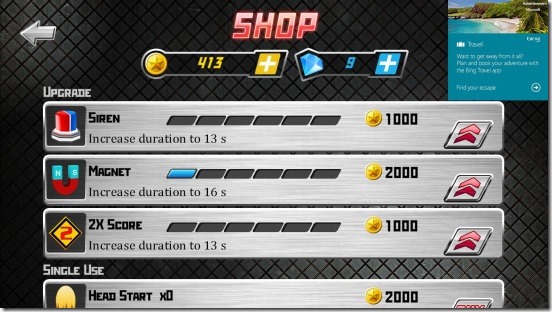 This app does test your skills, and the hand and mind coordination. You have to think in advance and visualize the best route for you. Also there’ll be times when you need to apply breaks to slow down the speed, because you can’t always keep speeding up, as it can lead to a crash. Crashing ends the game, and you have to restart from the start. The app is an infinite running game, and if you managed to keep riding the bike without falling, then you’ll reach different locations, having more difficulties. Difficulties in the sense that, you’ll get more traffic, and more number of vehicles that suddenly make a turn and block your way.

Following is a screenshot showing the game results: 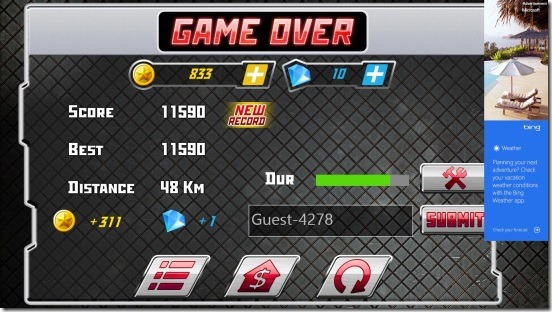 The game controls are very basic and easy. These are the keys with their respective actions: Up arrow/W –> accelerate, Down arrow/S –> brake, Left arrow/A –> to turn left, and Right arrow/D –> to turn right. Initially, it was a little difficult to control the motorcycle, but as you get a hold on it, then the game becomes really fun. So, get this Windows 8 bike racing game and play against you and players around the world to get to the top of world Leaderboard. 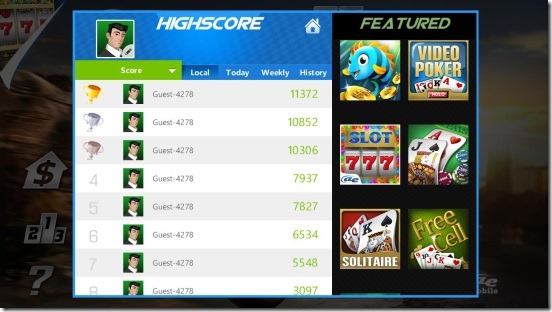 Also check out these 5 free bike racing games for PC.

AE 3D Moto – The Lost City, sure is a fun Windows 8 bike racing game. It has very easy to learn, but not too easy to master, controls. I had a great time playing the game. And besides being a free Windows 8 game app, the best thing about it is, it works in offline mode. That is you don’t have to be connected with internet all the time. Although, sound could be much better, still it’s a try worthy Windows 8 racing game. The gameplay, controls, graphics, all work good and well. Definitely worth a try.