Volume-Capper is a unique Chrome Extension that limits the Amplitude of Sound that is being played in a Browser Tab. It is also compatible with other Chromium based browsers such as Microsoft Edge, Opera and more.

Volume-Capper works based on the Decibel value of a sound piece. Decibel is the unit by which the Amplitude (Volume) of sound is measured.

It cuts down the Peaks of sound (played in a Browser Tab) greater than the specified Decibel value while keeping all those sounds audible that are lesser or equal to the configured value. Thus, it diminishes sounds of higher Amplitude (Volume) especially when loud music is being played. You must note that sounds being played from non-active Tabs and other applications remains unaffected.

Volume-Capper is very beneficial for educational institutions and similar environments and surroundings where loud sounds are against the protocols of the establishment.

Steps to be followed:

1. Download and Install the Unpacked Chrome extension (zip file) from the link provided at the end of this article. To learn about installing an unpacked Chrome Extension, click here and navigate to the section titled ‘Load an unpacked extension’.

2. Open a new Google Chrome Tab and play any audio file or video (with sound). Ensure that the System volume is set to the maximum.

3. Run the Volume-Capper Extension, click on ‘Turn it on’ and adjust the Amplitude Limit to the required value.

4. The Extension limits the Amplitude of sound based on the value that you have configured. It will clearly depict the Average Original Amplitude of the sound and the Average Corrected Amplitude depending on the specified value in Decibels. 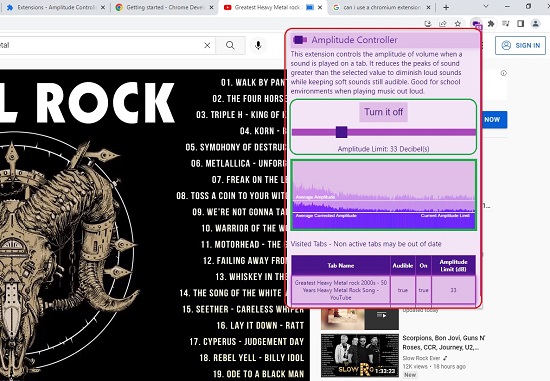 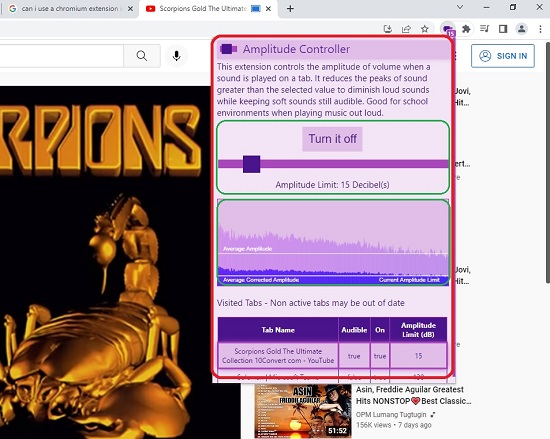 When I tested this extension, I found that the gap between the Average Amplitude and the Average Corrected Amplitude generally depends on audio being played. It looks to be more effective in sounds with heavy music such as rock music and heavy metal.

Overall Volume-Capper is a neat Extension for Chromium based browsers that can limit the Amplitude of Sound being played through a tab based on the specified Decibel Value. Its very helpful for surroundings where high amplitude sound is not permitted.