Here is a list of 5 free Jeopardy! Games that you can enjoy online. For those who don’t know what Jeopardy! is, you’ve been missing out one of the most exciting game show in television history. In this game, there are two or more teams or contestants. The contestants are shown ‘clues’ or ‘answers’ based on which they have to form a question. The clues are organized in a matrix under different subjects and run down increasing in wager amounts. Wrong answers will penalize the contestant by deducting the wager amount.

So, if the clue says ‘White House’, a correct answer would be- ‘What is official residence of USA’s President’. It is important the reply is phrased as a question. If not, then you’ll be penalized.

Earlier we covered an online service that helps you make Jeopardy! templates without using PowerPoint. So, if none of these services seem to impress you, make your own! 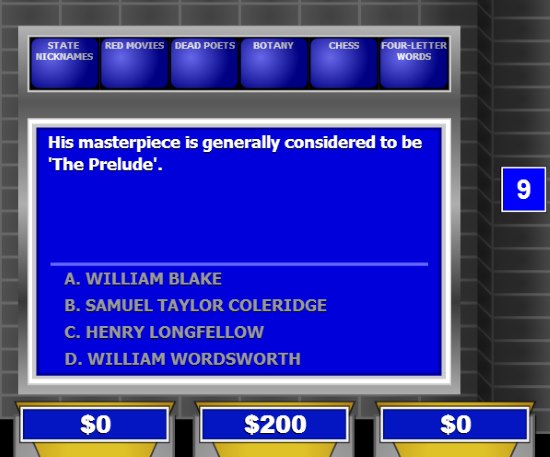 This rendition of Jeopardy! places you in an environment where three players compete. The game is set exactly like it was in the 80’s. It is well organized and contains lots of clues that are jumbled in every instance of the game. Set the difficulty of the game and choose if player 2 and 3 are CPUs. Each player can enter his/her name and a buzzer key will be assigned to them. Just like in the TV, the categories will march past you to give you an idea of questions you might expect. Hit the buzzer before your opponents do and select the right answer to win. Multiple rounds are held like in the original format of the game till a winner emerges.

This is the official site of Jeopardy! franchise where you can play Jeopardy! online with 6 clues. In the game show there is a 6th clue written for each category which the show doesn’t use. These clues are provided on J!6. 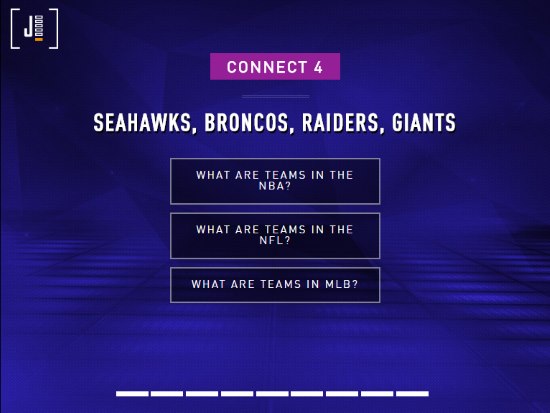 The game is based on multiple choices where clues are given to you and the correct question has to be ticked. Game presentation and UI are top-notch, something expected from the official website. Players need to sign into this game. Start the game and select 6 of your favorite categories. The game will give you 6 clues for which you have to select the right question.

Player’s game stats are recorded where performance in selected categories are also shown. The game provides new categories every weekday with new set of clues. The only drawback is that you can’t keep playing after two rounds and only the first round contributes to the score.

JimboTronimo.com is another website where Jeopardy! can be played. For that you will have to enter your email address. You might have doubts if JimboTronimo will resort to spamming. Have no worries, since your email address will be used to track statistics and so you don’t play the same game twice. 3 players can play in one match and each of their buzzer keys are mentioned beside their email address. 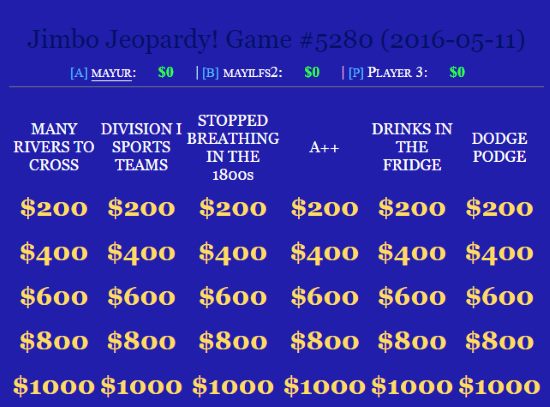 JimboTronimo’s Jeopardy! collection exceeds everyone in this list. There are more than 5000 jeopardy rounds you can play on JimboTronimo. However a lot of these have missing question. Normal games are labeled in black. The ones you have already played will be marked in grey. The game stacks up just like the original format. This version is way challenging than the other three above. You’ll only get 5 seconds to ‘type in’ the answer. This is more challenging than the choice based Jeopardy! games in this list if you don’t know your spellings. Exciting! right? 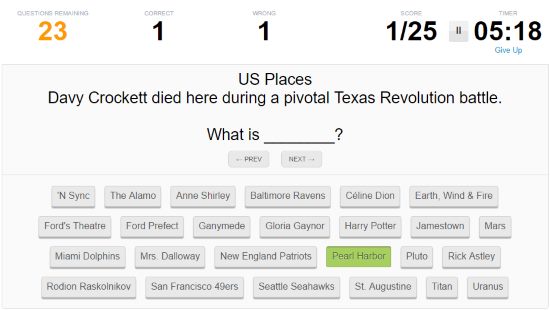 There is a whole host of Jeopardy! games on Sporcle.com. You do not need to log in or register for the game. Just select one of them from featured, most played and user created sections. I tried out the most played Jeopardy! games. There is no matrix-structured setting here. A series of 25 clues will be given with all the selectable questions of the series below the clue. You have to complete the game within 6 minutes. The game can be paused anytime you want. It seems this version of Jeopardy! is a very good tool to prepare for the real game. At the end of the game, you can check out your performance and try again to increase your score.

Jeopardy! was launched on Nintendo Entertainment Systems (NES) in 1987. Thanks to emulators and the web, you can play this game online on an NES emulator. In this game you can choose to play among humans or computer. The difficulty level can be also set. Moreover, you can select your avatar too. It is the proper Jeopardy game show. The game can also be played offline after downloading and using it with an NES emulator.

In this list, my favorite Jeopardy! game is JoyTube’s Jeopardy! followed by the J!6 from the official Jeopardy! site. It is because these two are much faster in gameplay. However, if you need a real challenge and are patient enough then go for JimboTronimo’s Jeopardy!.