Windows 8 Controller is a handy Android app to control Windows 8 from Android phone. The idea behind this cool app for Android phones is, giving users the ability to work and control Windows 8 PC using Android phones, without even touching the mouse or keyboard. The app uses Wi-Fi for establishing a connection between your mobile phone and Windows 8 PC , and once you are connected, you can then open Windows 8 Start Screen, scroll through Start Screen, rearrange the app tiles, open any app and work with them, open Windows 8 Charm bar and use them, play Windows Media player, open Internet Explorer, zoom in/out, execute any desktop app, and do lot more.

However a must have feature in the app: Virtual keyboard, is not free. This restricts the free version from doing a lot of handy stuff, which is a setback. 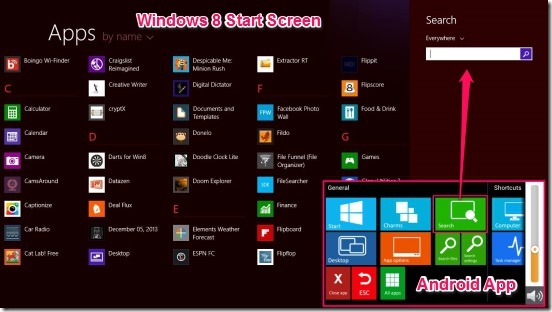 This is a really cool Android app to control Windows 8 PC,  using which you can turn your Android phones into a remote control for Windows 8. You can download this free Windows 8 controller app by clicking at link given at the end of this article.

How to Remote Control Windows 8 PC from Android Phone: 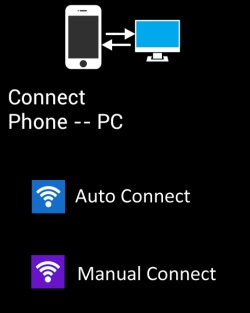 While connecting, a really good thing in the app is that, the app gives you options on the screen of your phone, to either connect automatically or manually as Auto Connect or Manual Connect buttons respectively. The automatic connection does removes the extra labor and time. All you need is, make sure that both the devices have to be in same network. And then click on Auto Connect button.

And, if in case your devices are not getting connected, then you can connect them manually. Simply click on Manual button in the app’s screen on your Android mobile phone. 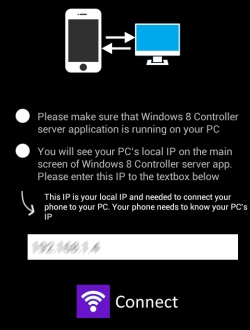 You’ll get next screen asking you to enter the local IP address of your Windows 8 PC, which you can get by running the Windows 8 PC version of the app, called Windows 8 Controller Server. The IP will be displayed on the main screen of the app itself. 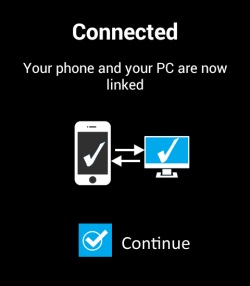 Simply type the same address in the text box in your Android phone and click on Connect. You’ll get connected.

Once you are connected, then it becomes too easy and also fancy to control Windows 8 PC through your phone. The app has two main screens. First is Tile View, where you can see and use different shortcuts to jump between Start Screen, Desktop, All app screen, and shortcuts to open Windows 8 Charm bar, different Search Charm options, customizing apps’ tile option, and closing opened app. Plus there’s also a volume controller on the right side. Simply tap on the desired tile to do requisite. 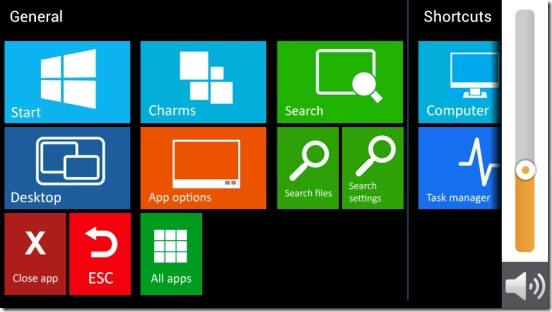 Once you are with the specific screen after tapping on desired tile mentioned above, simply tap on the back button of your mobile phone. This takes you to the other main screen of the app, from where you can perform actual controls, like moving the cursor, zooming in/out, scrolling through the screen, right-click, click drag etc. The controls are pretty easy and are mostly like basic controls, that you do in any touch device, for example tap to open, tap-hold and drag to move an item or make selection area, pinch in-out to zoom, swap to open charms and switch between apps etc. You can learn more about the “How to” of the app here.

Besides aforementioned features, this free version of the app has few more handy options, that include, executing a desktop app, running Internet Explorer, and Windows media player and controlling them from Android phone. To run any of these, simply go to the screen from where you control the cursor; you’ll get a bar containing list of apps. Simply tap on Internet Explorer or Windows media player. 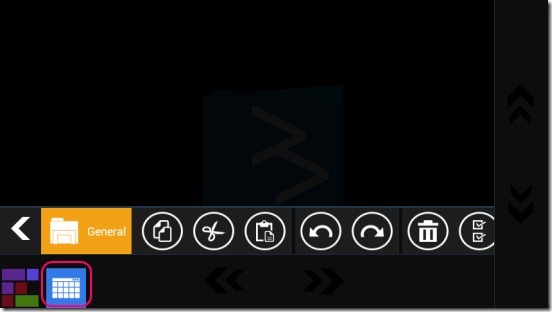 Beside these, another good feature of the app is, it helps you work more efficiently. It has one more free feature in aforementioned bar called General. This feature contains the tools to cut, copy, paste, delete, redo, undo etc. options. Simply make a selection and tap on desired button.

The app’s sensitivity to the touch and the respective reactions on the screen, works okay. I did have some troubles controlling the cursor using the phone. But that comes with practice and time. However the sync between the touch on mobile and actions on PC monitor work the best in Start Screen. And also the app gives you option to change the sensitivity settings. So you can set sensitivity to as desired. 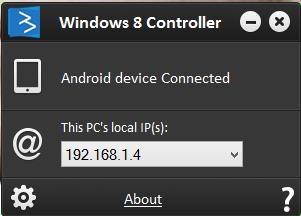 Simply click on the Settings button on the main screen of desktop version, and change the sensitivity sliders. You can change further more settings using the same screen, like changing the actions associated with gestures and swipes. 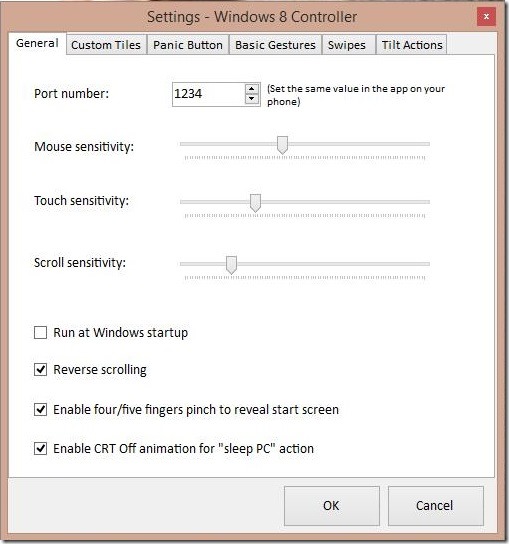 Another really cool feature of this Windows 8 controller app is the Panic Button, which actually lets you execute a series of actions like: minimize app, close app, mute volume, minimize all windows etc. by tapping just once on the button on the phone’s screen. Simply tap on the menu button of your phone, this brings a bar at bottom, then tap on Show/hide panic button. This brings Panic button on phone’s screen, simply tap on it once whenever required.

Key features of this Windows 8 controller:

Windows 8 Controller certainly is a good medium to control Windows 8 PC using Android phones. The app works fine, however it did crashed once or twice on the desktop, and the sync between gestures and respective actions on monitor, need a little more improvement. Also, I wish the virtual keyboard feature was free. That would have made the app unbeatable.

Still, it’s a pretty good start and pretty much satisfies it’s purpose. All in all, a cool free Windows 8 controller app to work/control Windows 8 and also impress your friends.