Pinned Window extension for Firefox, is a Firefox Add-on that lets you pin the currently opened tab. It is most handy when you have multiple tabs opened, and in a way, you want to lock certain tabs. The extension doesn’t completely lock the tabs, but separates pinned tabs from the rest by pinning them towards left side in the tabs list, and lock them from being rearranged with the unpinned tabs.

Another good feature of this Firefox Add-on is all the pinned tabs get stored with Session Restore, so the next time when you open Firefox browser then, they get opened automatically, with the page where you pinned the tab, and not with the last opened page.

The screenshot below shows the pinned and unpinned tabs. 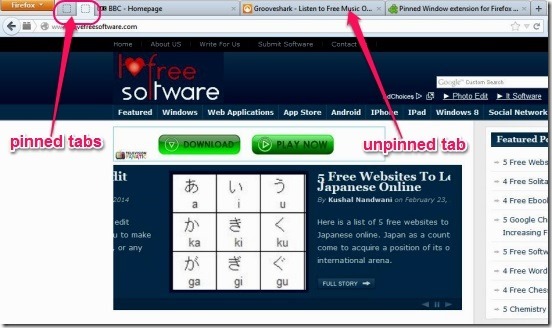 This is a straight simple Firefox Add-on, that applies the pinned tabs concept in Firefox. Simply add this Add-on to Firefox browser, the link is given at the end of this article. Open the link and click on Add to Firefox. This is an Add-on so you don’t have to install it separately like a software. Adding this Add-on to Firefox actually adds two more options to the Firefox tab’s context menu (menu that gets opened when you right-click on a tab). These are Pin tab and Unpin tab.

Simply open the desired URL in Firefox browser and then right-click on the tab, and choose Pin Tab. The opened URL gets pinned, making it locked from being rearranged with the other unpinned tabs. That is you can’t rearrange the pinned tabs with the unpinned tabs in the tabs list (present at top of interface). However you can still rearrange the pin tabs among themselves. And, that’s the idea behind the free Firefox Add-on : protecting important Firefox tabs from the less important ones. 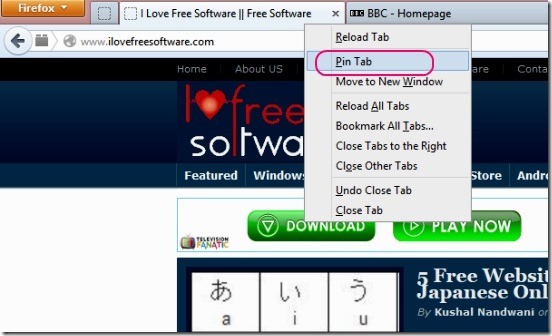 Session restore will store all your pinned tabs as mentioned above. The pinned tabs automatically open up when you open the browser next time, provided you haven’t closed the tabs before closing Firefox browser window.

Key features of this Firefox Add-on:

Here are some more good Firefox Add-ons, you might wanna check: Colorizer, and All in one sidebar.

Pinned Window extension for Firefox, is a decent enough Firefox Add-on. The session restore feature is pretty handy. Also it doesn’t adds any button in Firefox browser, and does the task without populating the browser interface. But the features of the Add-on is quite limited.