Air Time, is a very good Chrome Extension, using which you can get TV shows schedule, and see when the next episode of your favorite TV shows are going to get aired. This little Chrome Extension can also tell you about, when the next season of a TV shows is going to get premiered, later in the year. You can add as many television shows as you want in the shows list, regardless of channels, and view their next airing dates, together in one single platform, and read a small preview of the next airing episode. This chrome extension, also tells the airing episode number and the season. Plus, it also lets you view the dates and small preview of previous episodes, that got aired earlier, to the very first episode of the first season. 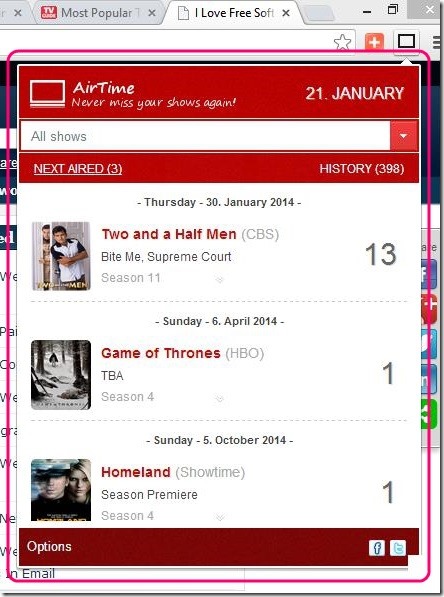 View TV shows schedule and get notified about their next airing date using Air Time:

If you are a big time TV shows fan, and if, Game of Thrones, Homeland, The Blacklist, NCIS, Grey’s Anatomy etc. are in your favorites list, then you should add this little extension to your Chrome Browser. This extension helps you to stay updated with the TV shows schedule, and doesn’t lets you miss any single episode. I liked the fact that, it lets you add as many shows as you want, airing in different channels. Adding shows and viewing their airing dates, is very easy. And, so is the process to remove shows from shows list.

All you need to do is, add this TV shows extension to chrome, and add shows. The extension’s icon gets added at the address bar of your Chrome browser. The extension then, automatically updates it’s shows list and shows information about the next airing date, and little sneak peek of the episode. Giving out the sneak peek of an episode is very good feature of the extension, and generates interest in the shows. 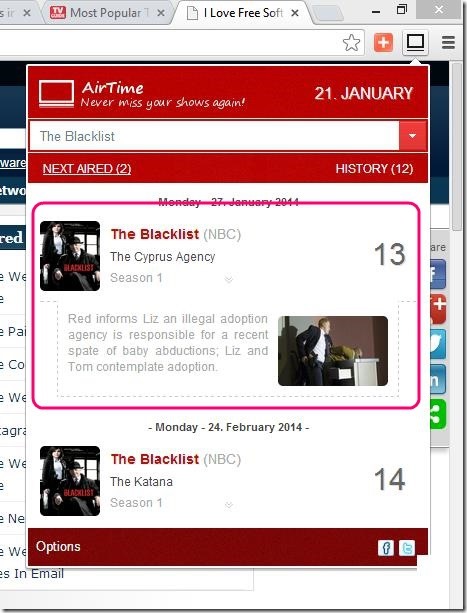 Not only, you can view the information about the next airing episodes, but, you can also view previously aired episodes’ information, as well. The information about a show includes, the airing date, channel, episode number, season, and small preview of what is going to happen in an episode. To see previous episodes’ details, simply click on History button in the UI. However, the information doesn’t includes airing time details. That’s a set back for the extension. 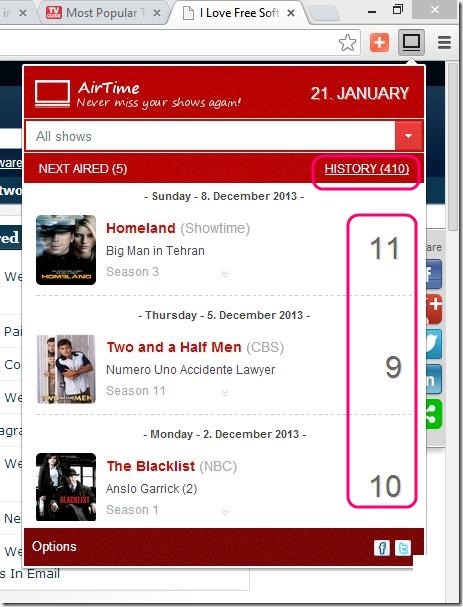 Simply, click on Options in the extension’s UI, and you can then type the name of the show in the add show text box. Good thing is, this extension gives shows hints while adding shows. Simply, click on the show from the suggestion, and the show gets added automatically. And, the next time when you open the extension, it list downs all the shows you added, along with their airing date and other information, in one single place.

And to view a single show’s information, simply click on All shows drop down list, and select one of the show that you added. 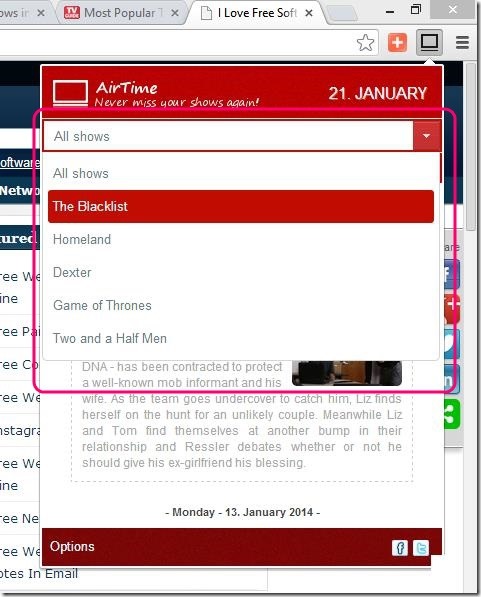 If you like watching sports, then do check out this online web service to watch Live Sports Online for free.

Air Time, is a good chrome extension, and is pretty handy for all alike. It’s simple, easy, and practical. The only thing that it is missing is, the information about the airing time. Besides that, it’s an all complete TV shows reminder extension.