In this article, I have compiled a list of 5 free talking Santa Claus Android apps. These are some cool apps for parents that they can use to make their kids play with Santa Claus. Your kids will surely love these talking Santa Claus apps as these apps will let them interact with Santa. Most of the talking Santa apps will repeat what your kids say in a very funny voice. Apart from that, your kids can also make Santa jump or perform some other cool and funny animations. One of the Santa Claus apps in my list will also allow you to make a voice call to an automated Santa which will talk with your kids. The best part is that you can schedule a call from the automated talking Santa app. So, this will surely help if your kids want to talk with Santa. You just have to schedule a call and then show your kids that you have received a call from the Santa and make them talk +with him. 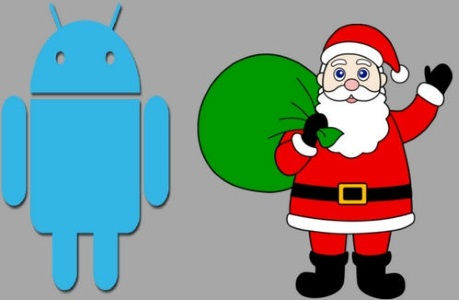 So let’s get started and see each of these fantastic talking Santa apps which will surely bring joy to your kids. 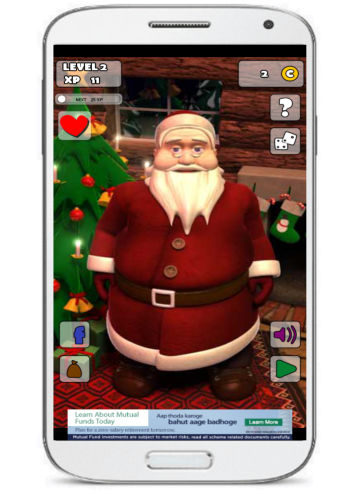 Talking Santa 2 Free is a talking Santa Android app which will allow your kids to interact with Santa Claus in a very funny manner. You can make Santa perform actions or make a sound. Apart from that, the Santa will react when you poke or tickle him and he will also repeat what you say in a very funny manner. It is actually a game in which you have to collect XP to level up and unlock more animations, sounds, and Santa looks. You can collect XP by interacting with the Santa. You can download this cool Santa Claus game from the link provided above.

A Call From Santa!: 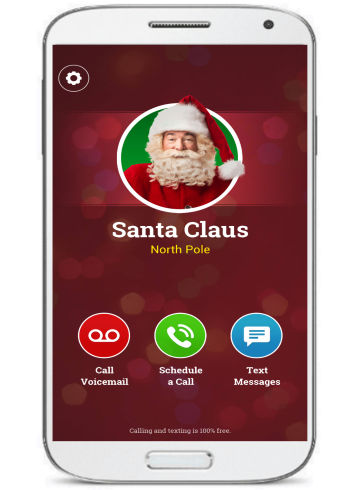 A Call From Santa! is a free talking Santa app which actually make your kids talk to Santa as if they are talking to a real Santa. The app is pretty exciting as it lets you make a call to an automated Santa Claus and talk to him. The conversations during the calls are non-interactive i.e. Santa will only speak what it is supposed to speak and will not reply as per your child’s answer. A point to note is that this app doesn’t provide any texting or calling functionality, all calls and messages are simulated by this app only.

The best part is that you can even schedule a fake call from this Santa Claus to show your kids that Santa wants to talk to you. While scheduling a fake call from Santa, this app lets you specify the kid’s name and age. So, after you receive a fake Santa call from this app, the automated Santa will speak the kid’s name and age during the conversation. This can really make your kids think that they are talking to a real Santa Claus. The voice of the automated Santa closely resembles a human voice but adds a more animated flavor in it. You can also make your kids to chat with Santa. Download this talking Santa app from the link provided above and make your kid talk to send in a more interactive manner. 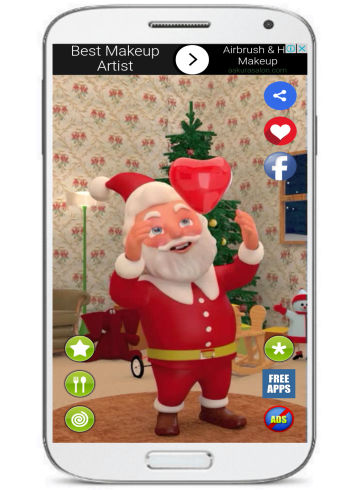 Talking Santa Claus is another exciting talking Santa app that will repeat what you say in a funny way. It is quite a simple app as compared to other talking Santa Claus apps in my list. It offers just a few actions, like, you can make Santa perform funny moves, eat food, fly a heart-shaped balloon, and drive a scooter. The best part is that this talking Santa app is completely free from annoying advertisements. So check out this app if you dont’t like ads when you are interacting with the Santa. 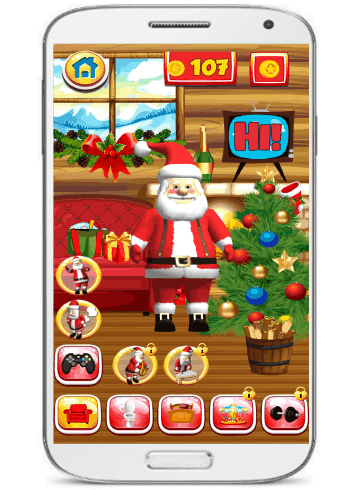 Talking Santa another cool talking Santa game. In this app, you can perform a lot of different actions on Santa like brush his teeth, make him fall asleep and wake up, and other animations. This app provides other Christmas theme based games within the app itself that you can play. I found a similar game to Doodle Jump in which you have to jump a reindeer to the top. Just like other talking Santa apps in my list, the Santa in this app will mimic your words in a funny way. You can slap and tickle Santa for fun and to perform animations or you can tap on any of the icons on the app’s interface. To perform actions on Santa, switch to different rooms and then interact with the Santa. In this Santa Claus game, you have to earn gold by playing the mini games and unlock other animations using that gold. So best of luck with it, you can download it from the link above. 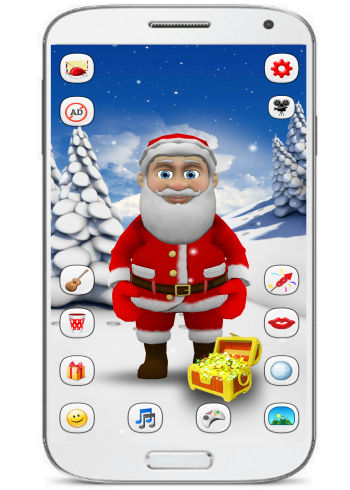 Santa Claus a free talking Santa app which will let you talk and interact with the Santa Claus just like other apps in this article. The Santa of this Android app is quite cool and he will play songs and dance for you. And of course, he will mimic your voice in a comic way. Swipe down on its main interface and Santa will wish you “Merry Christmas”. You can also make Santa Claus play guitar, shoot rockets to the sky, drink coffee, do flying kisses, throw snowballs, and other cool stuff. It also offers a few soundtracks that Santa will play for you like Jingle bells, Deck the Halls, We Wish You a Merry Christmas, etc. It also dances while the soundtrack is played. You can also play some of the mini-games inside this talking Santa app. Download this cool talking Santa Claus app from the link provided above.

In this article, I introduced you to some cool talking Santa apps and games. All of the talking Santa apps in this article will mimic your voice in a funny way. You can also perform actions on the Santa, like brushing his teeth, slapping him, or throw snowballs on him through these Android apps. I personally like A Call From Santa! as it allows you to interact with the Santa Claus through calls and text chats. At last, our ILoveFreeSoftware team wishes you a merry Christmas! :)