Shakes and Fidget is a free to play RPG game on Steam where you can build a custom fantasy character and go on adventures to earn experience and coins. Shakes and Fidget does not require heavy graphical requirements unlike most of the free RPG games out there. Shakes and Fidget is an interface based 2D game and is controlled purely by the AI of the game. You are responsible for making the right strategic choices that will push your character forward in the game. So if you want a lot of action where you are solely in charge of punching and slashing your enemies, then this game is not for you as the game does that for you. Shakes and Fidget is ideally for people who want to kill time with a few laughs as it is modeled as a satire on modern free RPG games. 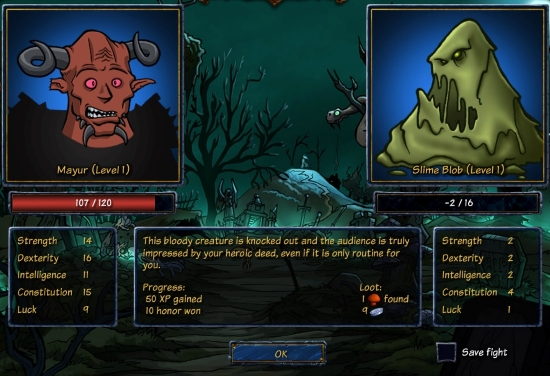 The game starts off with you creating your fantasy character. You can choose the race of your character where each character is different based on the attributes. For example, a demon will have more strength than a dwarf but will have way less luck. Similarly you can choose the class of your character based on the battle approach. A scout will attack from a distance and quietly but a mage will use magic to attack straightforwardly. The game provides you elements of multiplayer with Arena battles where you pit your character against another Shakes and Fidget player.

You will be provided with lots of quests in the Tavern. Completing these quests will earn you experience, coins and sometimes mushrooms. Coins and mushrooms can be used to upgrade your gear and weapons. You can upgrade them from the Weapon Shop and the Magic Shop. This free RPG game also lets you make guilds and join guilds. You can add friends from the guilds and contact them with the in-built mail.

Other features include battles in dungeons, building fortress, hall of fame, etc. So let’s take a deeper look in this free RPG game. You can also try out this free real-time and free MMORPG game if you want a more engaging game.

How to Build Your Character on Shakes and Fidget

This free RPG game provides you 3 classes, 8 fantasy races and 2 genders to choose in the introduction. The 3 classes are: 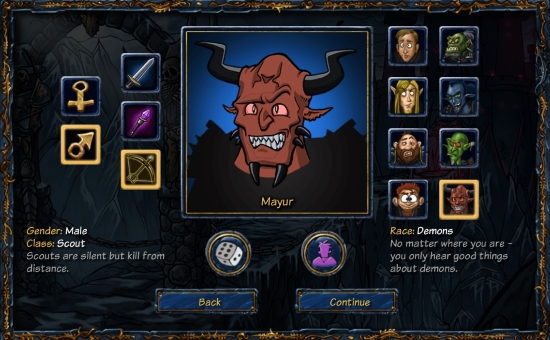 The races are namely: Human, Demon, Elf, Dark Elf, Orc, Dwarf, Goblin and Gnome. Each are classed with 5 attributes, which are: Strength, Dexterity, Intelligence, Constitution and luck. These attributes play a major role in how your character handles itself in the battles and quests. For each race the attributes differ based on stereotyping. So a human is completely neutral in all the attributes, Dark elves are high in dexterity and intelligence, dwarves are better in terms of luck and constitution, etc.

You can further change the looks of you character by toggling out what you deem suitable. You can change the eyes, beard, mouth, eyebrows, nose, etc. Each race has a different look toggle. In case of demons, you can change horns. When you’re done, click on Continue.

How to Battle and Adventure on Shakes and Fidget 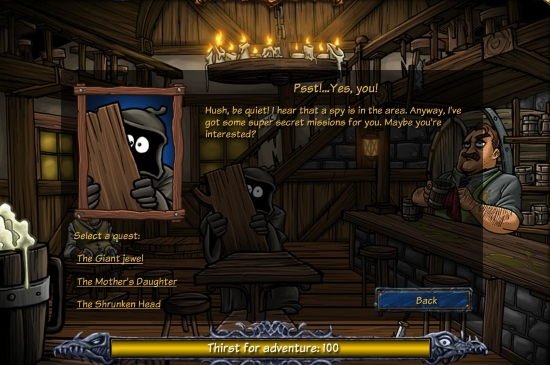 When your character is complete, you can go to the Tavern on the left panel. Here you will find the quest giver sitting on the front. There is also a gambler on the back where you can gamble your coins to earn more if you feel lucky (don’t play if your luck is low). Click on the quest giver to open a dialogue box. The quests will be given at the bottom with their payoffs mentioned. Click on a quest to select it. You’ll be directed to the quest battle after you wait for a certain amount of time. The battle will be fully automated based on the stats of both belligerents. The one with better stats and a hint of luck will win. 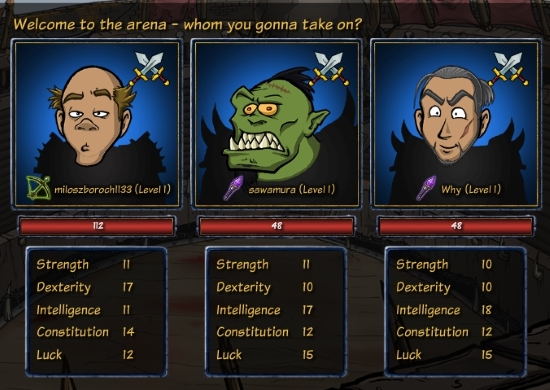 Click on Arena on the left panel to battle other players on Shakes and Fidget. Make sure you choose an opponent wisely based on their stats. Click on the crossed swords to battle an opponent. The battle weighs every attribute of your player and gears it in the game mechanics to decide how the battle will turn out. So don’t celebrate when you see your character pummeling the enemy as the tide of the battle can turn unexpectedly. I battled my level 4 demon against a level 2 dwarf and I lost.

Dungeons will set you against many enemies till you battle the dungeon boss. Defeating the boss will win you a special unknown treasure. There are a total of 13 dungeons you can adventure.

How to Upgrade your Character on Shakes and Fidget 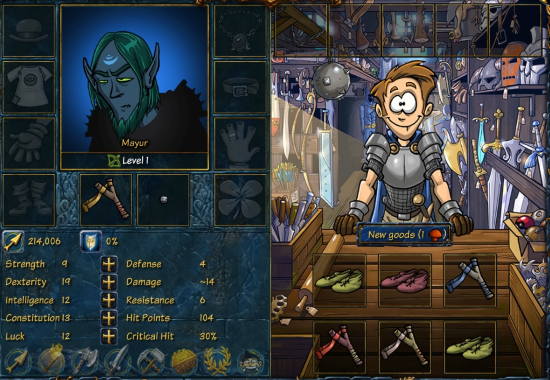 To upgrade your player, you can buy various items from the Weapon Shop and the Magic shop on the left panel. The Weapon Shop will provide you with various wearable items. You’ll be given 8 grooves based on the apparel you wear like boots, clothes, hats, etc. Fill the grooves with the related armor/apparel which can boost your attributes and skills. I gave my character a tunic, which boosted his armor by 5 points.

The Magic Shop will boost your magic related attributes like dexterity and luck. Some of them are consumables with a set time limit. There is not much to see here if you’re a warrior or scout, except when you want to buy an item that increases luck or constitution. 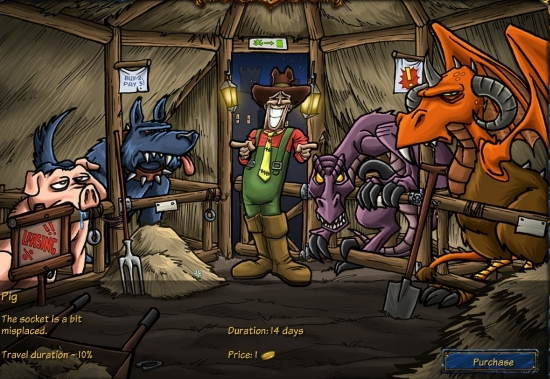 There is also a Stable where you can buy a transport medium for coins and mushrooms. These basically reduce the waiting time before a quest.

When your character levels up, you are provided with attribute points that you can add in the Character tab from the left panel. These cost coins, so spend wisely. In addition to that, moving forward in the games also wins you some achievements/titles that add more points to the attributes. 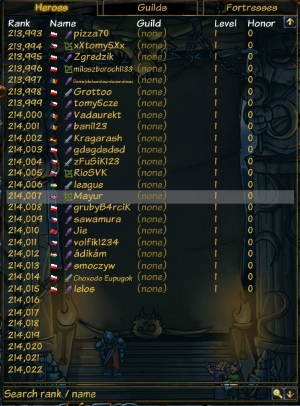 The Hall of Fame will show you the rankings of all the players on the Heroes tab. You can select a particular player and look at the stats. On the player info tab at the right side, click on the ‘D pad’ icon to expand the actions you can do related to that player. You can send that player an email, compare your own character, send a friend request or block the player. You can also attack the player by clicking on the cross sword icon but you won’t earn any experience. If you switch to the guilds tab then you can check out all the guilds rank-wise and its achievements. Click on Contact to send them an email so you can ask to join the guild. You can also make a Fortress that gives you extra game play where you can create barracks to train an army, treasury to increase backpack space, academy to increase experience gain, etc.

This free RPG game should not be confused with MMORPG games that are way more engaging. It is a simple interface based RPG game that does not require much input from the player. So if you like your games slow and strategic, then this game is for you. The only negative point I found in this game is the feature of waiting before a battle, which is very annoying. I award this game with 4 stars.

Get Shakes and Fidget here.

Want me to review a free game of your choice? drop in your suggestions in the comments below!