Weightley is a free web app to make a weighted to-do list. It helps you visualize the importance of one task in a plethora of others. Alternatively, it can also be used to measure how much a particular task has been completed. The web app looks pretty sleek and unlike most of the to-do apps, it is effortless in use. On this web app, you only need to set only two things: The task you need to do and the percentage weight of the task.

If you’re looking for a to-do list maker that focuses on organizational features, Weightley might fail in pleasing you. I feel Weightley employs simple aesthetics in a clever way to boost your concentration on the task at hand. So whenever you are out in a game to kill dragons, make sure you add the most weight to “collect health potions” in your checklist. 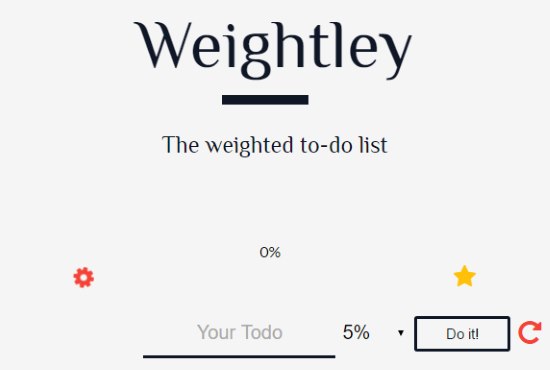 So without Further ado, let’s have a better look at Weightley:

How to Make Weighted To-Do lists with Weightely

The developer has intended the use of Weightley for weighing out sub-tasks or steps in a task based on their importance with respect to the task. In the developer’s own words: “If your goal is making toast, putting the toast in the toaster has more weight than buttering it”.

So to give Weightley a test drive, I made a to-do list of the most important task in my life: eating pizza.

The steps and their distributed weight according to would be:

I entered the above in Weightley accordingly. Each step generated a box with the respective step written on it. When the last step is entered, the list is complete and a button appears on each box.

When you finish that particular step, hit the respective button and the progress bar will develop till you have completed all the steps to complete the task. This was a fun!

Weightily is a really awesome tool. But currently, it is limited to Tablets and Computers. This means no portability. It would be also awesome if it included a sync feature across a lot of devices. Since it is still in development, I hope to see a lot of progress in this web app. I award Weightley with 4.8 stars, primarily because of its uniqueness.