This tutorial explains how to listen to YouTube with screen off in Android. If you are looking for a way to play YouTube in background even if Android phone is locked, then these methods will come handy. In the first method, I will use Firefox browser for Android which allows you to play YouTube videos in the background even when the phone screen is off. In the second method, I will use an Android app called Blackr which makes the phone screen look like completely black. So, you can use this app to instantly turn the phone screen into the black color, which means that screen would use very less battery.

How to listen to YouTube with screen off in Android using Firefox Browser:

Firefox is a very popular browser available out there for desktop and phones. If you use Firefox on your Android device, then you can easily play YouTube videos in the background even if you lock your screen. The process is really very simple and doesn’t require any additional steps, rather just install this browser if you don’t have it already. After that, open YouTube in Firefox and you will see its mobile version. Now, you have to load the desktop version of YouTube in Firefox to play it in the background even when the screen is off. For that, tap on the “three dots menu” of the browser and select the “Request desktop site” option, as shown below. 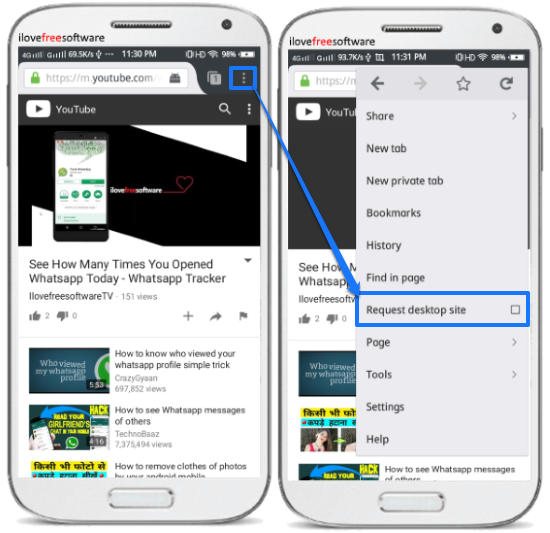 How to listen to YouTube with screen off in Android using Blackr:

Blackr is a free Android app which can be used to play YouTube videos with screen off in Android. What this app does is that it completely blacks out your screen, which looks like as it is turned off. Also, it provides a quick button to turn any Android screen to black. So, all you have to do is play a YouTube video in default YouTube app or browser and then use this app to turn the screen into a black one. The YouTube video then continues to play but you will just see a black screen, which indeed saves some battery of your device and also gives you a feeling that the screen is turned off.

Step 1: Open Blackr preferences and select the Enable and Show option. After that, you will see a small circular floating button which can be used to black out any screen, as shown below. By default, it shows the time and battery status on the black screen. In case, you want a completely black screen then deselect the “Time” option. 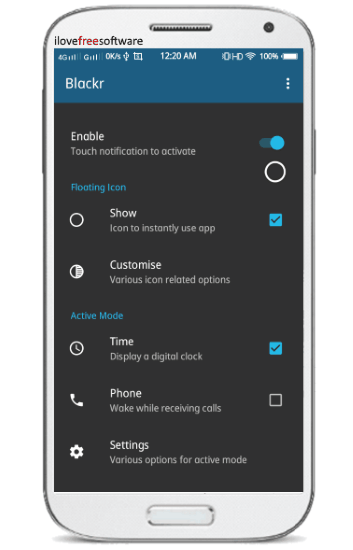 Step 2: Now, play a video in the YouTube app or browser and tap on the floating circle button to turn the screen completely black, as shown in the screenshot below. 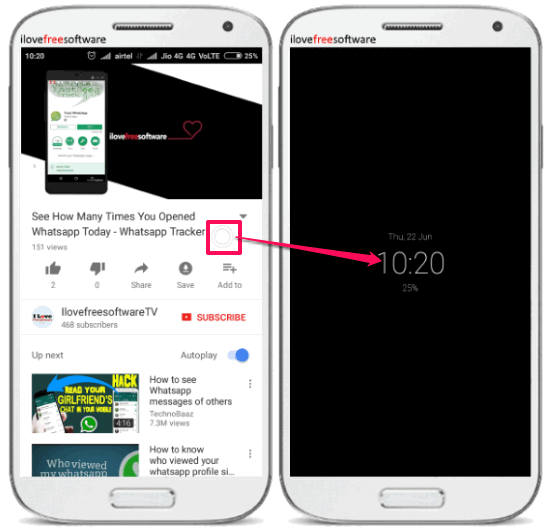 Now, you can keep listening to audio from YouTube, even though the screen has gone Black.