spacedesk is a free multi-monitor app that lets you use Android as a secondary display on PC. To do that, you have to install the spacedesk server app on your PC and spacedesk client on your Android phone. Both devices must be connected locally over WiFi, LAN, or USB and should support Network protocol TCP/IP.

With spacedesk, you can either extend the PC screen to an Android device or mirror the current screen for desktop duplication. You can connect multiple devices to add multiple displays. spacedesk server app is available for Windows 10 and Windows 7 for both, 32-bit and 64-bit versions. And, spacedesk client app is available for Android, iOS, Windows, and web. This means you can also use iPhone, iPad, Windows PC, and Chromebook as a secondary display along with Android devices. With that said, let’s see how it’s done.

Use Android as Second Display for PC Free

The setup process is the same for all the devices. First, you have to install the spacedesk server app on your PC running Windows. And then, you have to install the spacedesk client on the other device which is Android in our case. After installing the respective apps, make sure that both devices are connected locally. The simple method to connect the devices is either via USB cable or over wireless LAN. In the case of wireless LAN, just connect both devices to the same network/WiFi. 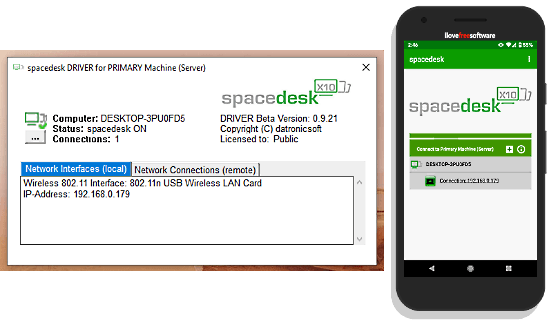 After connecting both devices, open the spacedesk app on PC. The app shows you the computer name, connection status, and spacedesk driver version. Below that, it shows the local network interfaces and network connections in separate tabs. 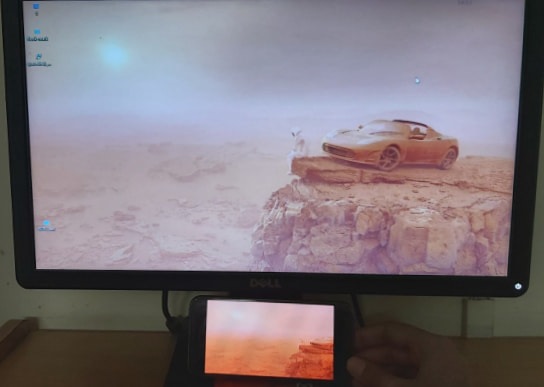 The Android device will act as a secondary display for Windows PC. From the Windows display settings, you can either extend or mirror your desktop screen to Android. The Android screen supports touch input, instead of bringing the cursor to the secondary display, you can use the touch for interaction.

spacedesk is a handy utility app that lets you use almost any smart devices as a secondary display for Windows PC. It can be useful outdoors where you can not bring a secondary monitor with you. It is similar to the sidecar feature of macOS but with more versatility and device support. The only downside of this app is that it doesn’t use any encryption while transmitting data between devices. So, I recommend you not to use this on public networks, instead, use a personal hotspot on any of your devices for connection.