This tutorial explains how to run Android apps in Windows 11. Yesterday, Microsoft announced the early preview of the Android app support in Windows 11 Insider build in Beta channel. But the Android support is very limited. For now, only 50 apps are available to install so far.

Windows subsystem for Android appeared in Windows Store quite sometime ago, but you can now actually use it for running Android apps. There are strict hardware requirements which need to be met in order to have smooth Android experience on Windows. And in this post, I will tell you how to enable Android support in Windows 11.

As mentioned earlier, only Windows Insider build in Beta channel have Android support. So, one sad thing about this is that a lot of insider users are on Dev and Release Preview channels, which don’t have Android support. But in this post, I will show you how to run Android apps on those Windows builds as well.

This post is divided into 2 sections. In the first one, I will discuss how to add Android support to Window 11 in the official way. And in the seconds, part, I will walk you through the steps to manually install Windows Subsystem for Android with Amazon App Store. 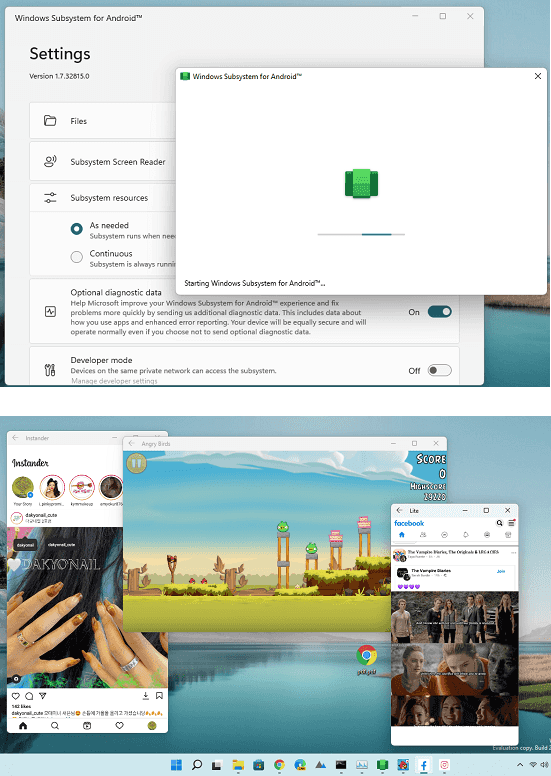 Before getting started, let’s have a look at the general requirements to run Android apps on Windows 11.

You now have an idea what is required in order to enable Android support on Windows 11.

If your PC meets the location and hardware requirements, then you won’t have any trouble running Android apps. Here are the steps that you have to take.

The app will run like any other Window 11 app. You can close it and even remove it. To uninstall an app, you just right-click on it in the Start Menu and click “Uninstall“. This is as simple as that. Also, do note that Google Play Store is not available and probably never will. You have only 2 options to install apps; from Amazon App Store or by manual app sideloading.

Since the Android works in beta insider channel builds only, a lot of people are left from trying it out. If you are on other insider channel such as Dev, then you can follow a simple workaround to enable Android support. Basically, you will have to manually install the Windows Subsystem for Android and Amazon App Store to install and run Android apps.

However, you will be only able to install apps if you sign in using an Amazon account from the United States. Otherwise, you will have to sideload the apps in order to run them. And I will walk you through all the steps involved in manually enabling Android support in Dev Insider build.

Here are the steps to manually install Windows Subsystem for Android with Amazon App Store and Side load APK files.

It is all ready to use. You can sign in to Amazon App Store and then install the apps. But if you are located outside the USA, then you will have to sideload APKs. For that, refer to the next section.

You can sideload APK to the Android system, which is running virtually on your PC. You can install apps using the popular Android Debug Bridge, aka ADB. Download adb from here as a part of SDK Platform Tools. After that, extract the ZIP file somewhere and open a command prompt. 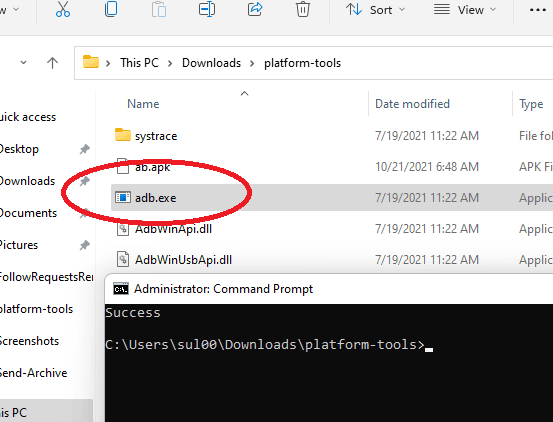 Follow the above steps to sideload any APK file. Launch it, and then you are free to do whatever you want. It will run most apps, but some won’t run. For example, it failed to run Chrome and Microsoft Edge Android apps. But games and social media apps worked just fine. Below, you can see Facebook Lite and Instagram Android client running on my PC. 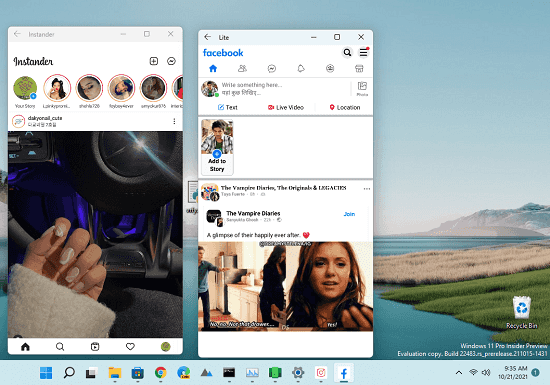 In this way, you can install Android apps on Windows11. It works and it is amazing.

It is not the first time that Microsoft has brought Windows subsystem for Android. They did it once for Windows Phones at some point, and unfortunately it didn’t prove to be a wise move. But now they have added it to the desktop, and I think this time it may give a tough competition to Chromebooks. However, I think that is not the point, but having Android support will definitely impel users to go for Windows now.