This article talks about a free Game Builder by Google to build Minecraft-style games without coding. Actually, it’s a simulator game for Steam where you can build your own game. It packs a few templates to get you started along with a tutorial to guide you on how to build. You can design 2D games, 3D games, First-Person games, Racing games, and so on. While building, you can define the logic for an object either by picking a module from a predefined module library or coding it. The module library is decent and packs lots of customizable templates so, you can just use those and won’t have to code unless you want something that’s not in the templates.

Another good thing about this game builder is that it also lets you play the game that you build and supports multiple players. So, you can invite your friends to build and play games together. This game editor also has an online space where you can publish your games for the community. You can also download the games from the store and play them.

Also read: Coding Games for Kids to Learn Programming with These Free Websites

Game Builder by Google is launched on Steam so you need Steam installed on your PC to use this. It is available for Windows as well as for macOS. If you don’t have Steam installed, first, install that and login to your Steam account. Then, download this Game Builder from the Steam store. Here is a link to that. Once done, you can launch the game from Steam and start building. 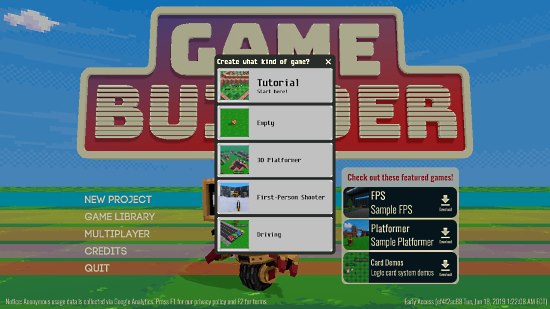 The first screen of this game builder gives you options to create a new project and browse your Game Library. All the games you build in this tool gets listed in the Game Library from where you can publish them on the store. If you want to collaborate with others, you can go with the Multiplayer option and invite your friend to build and play together.

Coming back to the game building, when you create a project, this tool gives you a few choices and asks to choose what type of game you want to build. From here, you can build 2D, 3D, First-Person, and Driving games, or you can start with an empty platform and build whatever you want. The game editor has the following editing tools: 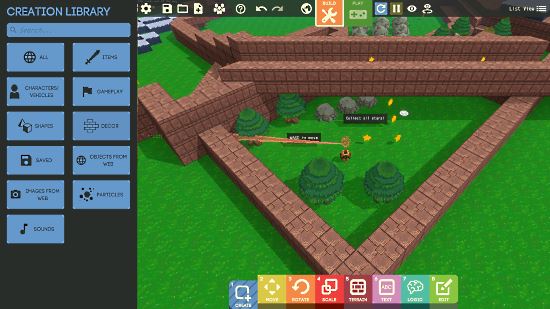 Apart from that, there are all kind of options to change the angle and perspective while building a component. The Create tool gives you a list of objects which you can drag to the platform and start building. You can also track all your previous steps anytime and edit any of that if needed.

Here is a list of all types of objects that you can add to the game: 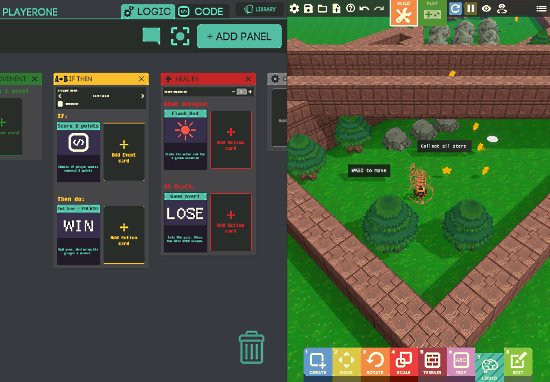 In terms of game logic, this tool has a huge set of action modules which you can customize as per your needs. These modules have some pre-defined values which you can replace with your and also combined multiple modules to and create a set of actions. All the logic modules are divided into the following categories:

Game Builder is an experimental prototype built that provides you a hybrid simulator where you can build and play games. Multiplayer feature makes it possible to collaborate and build games with others remotely. It’s all very simple and easy, give it a try yourself and share your thoughts with us in the comments.