Do you ever think about writing a poem or rhyming some stanzas, and then, didn’t give it much thinking later? Or just rhymed some words and lines in free time but didn’t go further than that. Well, here are 5 Best Rhyming Poem Generator Websites which might help you do that.

Here is a poetry app to read poems on any subjects or mood.

AI Poem is a website with rhyming poem generator which uses AI for rhyming. Here, you can generate a good rhyming poem within 30 seconds. To do so, select a style from the Latest, or browse the list to choose the desired style. Then, it asks you to input some nouns and pronouns which you like to include in your poem. You can also enter lines or stanza which you like to include in the poem. 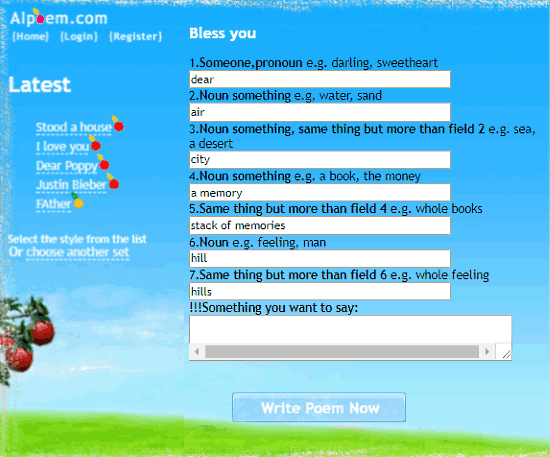 After filling all those fields, click on Write Poem Now button. Then, the website generates a 3 to 4 stanza poem with decent rhyming. The poem contains all the words and lines which it asked as input earlier. The generated poems at this website are well rhymed and meaningful.

Pangloss.com is a small website with some creative content and features. At the homepage, it shows a new popular quote whenever you click on it. It has rhyming poem generator to generate poems by taking some input from the user. 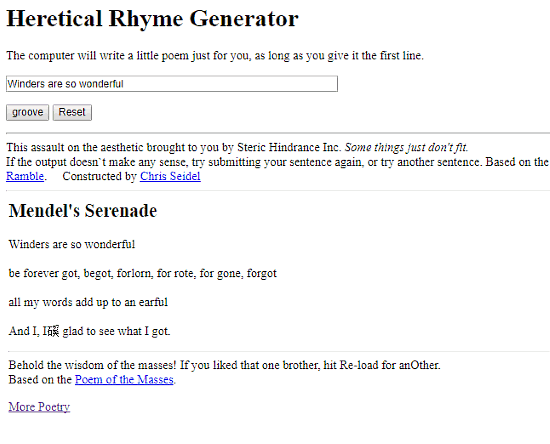 For generating a poem, all you have to do is, just enter a first line for the poem. Then, it finds rhyming words and generates a one stanza poem on the basis of that first line. The generated poems are well rhymed and meaning wise make sense, most of the time.

Give it a test run here.

Poem of Quotes is another website with an online poetry generator tool. This tool generates romantic rhyming poem. If you want to impress someone with a romantic poem then this poetry generator can help you out. 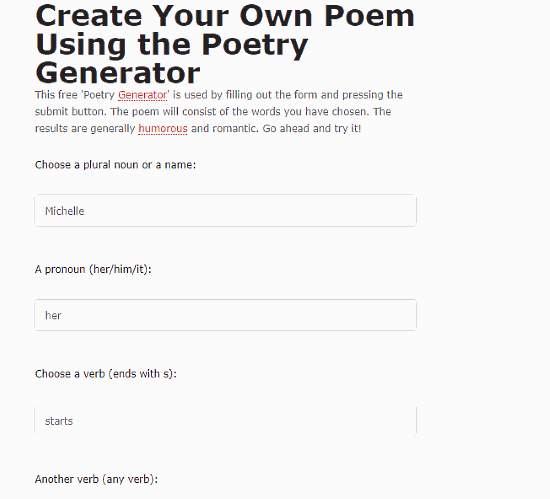 All you have to do is, fill some text fields with the words which you want to include in the poem. It asks you a name or noun, a pronoun for that person, and some verbs. Then, it generates a rhyming poem of 2 stanzas around all those words. The poem it generates has a romantic tone and meaning to it. And, if you don’t like the poem, just try it again and it will generate a different poem for you. 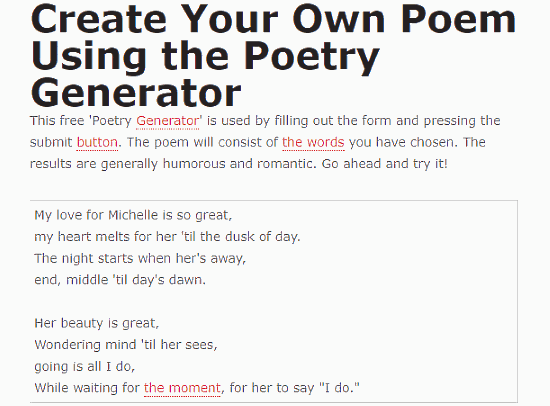 RunokOne.com has a rhyming poem generator that goes with the name “Make A Poem!“. It asks your name and a title for the poem and generates a random poem around that title. It also shows you poems by other users which are more or less close to your title. 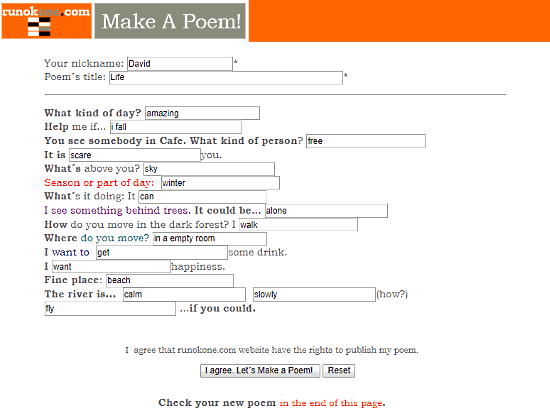 It also has around a dozen extra fields which you can use to generate a refine and more personal poem. Just give it the extra words and it will generate a poem according to your entries, including those words. Sometimes it generates poem with arbitrary words which don’t make sense together, but if you give it some words to play with, it can generate a decent short poem.

Give it a go here.

Poetweet is more of a fun and creative rhyming poem generator in this list. It doesn’t ask you anything for generating a poem. Instead, it uses your tweets from Twitter and makes a poem out of them. 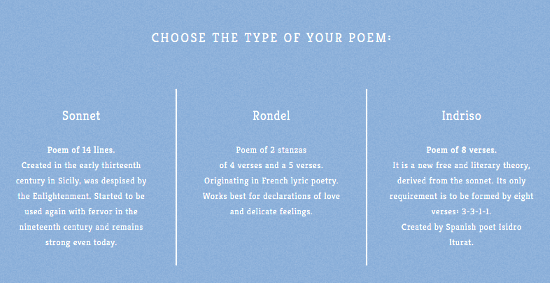 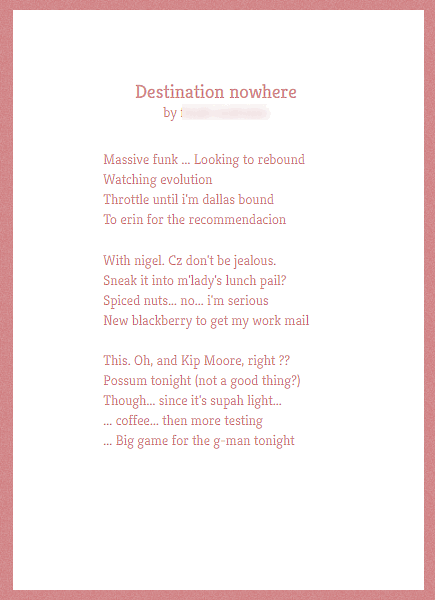 It requires a good number of tweets to generate a decent poem. If you have very few tweets on your Twitter then it may struggle to generate a meaningful poem. And, the fun part is, you can create a poem out of the tweets of any public Twitter account.

Each of these websites has a decent rhyming poem generator. Some generate better poems than others by taking more input. My personal favorites are Pangloss and Poetweet. Pangloss generates a good poem by taking a first line and Poetweet is fun to play with. Try them out yourself and let us know which one you like.