Here are the new features introduced in Windows 8.1

On October 17th 2013, Microsoft officially released Windows 8.1, an update of previously released Windows 8 OS; available for free to Windows 8 users. With this updated Windows, Microsoft has tried to bridge the gap between the touch and mouse based applications. While the previous version of Windows 8 was more focused on the Touch based users, with the Windows Store apps and the inbuilt standard apps, basically made for the touch devices. But as many Windows users still use desktop and laptop, so the Windows 8 OS created a steep learning curve for the traditional users, as they had to work on a completely new redesigned Windows, which they weren’t familiar of. Also Windows 8 did had some issues for the traditional users, and the most noticeable was the missing Start Menu, which gave birth to many software to get Start menu on Windows 8.

So, with this Windows 8.1 release there’s an approach to remove these issues and create a much faster, easier, and functional OS, that can equally good for both old and new worlds (that is mouse and touch screen).  This new OS looks and feels just like the same to previous version, but it’s the small changes and adjustments that has made a significant improvements in this OS, over the older OS. Let’s go over some of the new features introduced in Windows 8.1 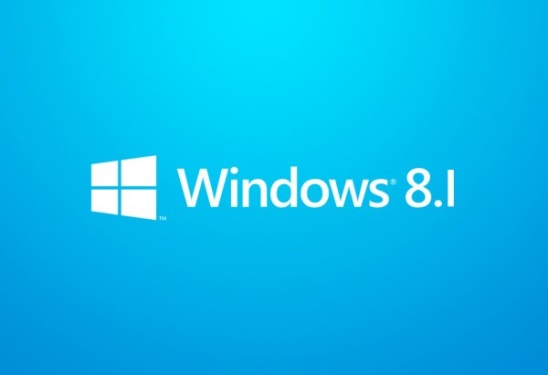 With this newer update of Windows 8, the legendary Start button has returned back to the game. It was one of the most noticeable feature that most of the Windows 8 users have missed, specially the desktop and laptop users. So, Microsoft brought it back. But, it’s been limited to two main functions. A left click on it switches you between the Windows Start Screen and the Desktop. Whereas a right click opens up an advance menu to directly access Device Manager, Control Panel, Device Manager, Network Connection and Shutdown. So, the Start menu, is still missing.

2. Boot directly to Desktop in place of Start Screen:

This feature is basically made for the traditional non-touch Windows OS device users. Using this feature, after you sign in with your username and password during the startup, you can jump directly to the desktop in place of the Start screen, hence giving you a familiar Windows look. And if you don’t want it then you can always keep the same old Start Screen, with all those installed app’s static and live tiles of small and wide sizes. 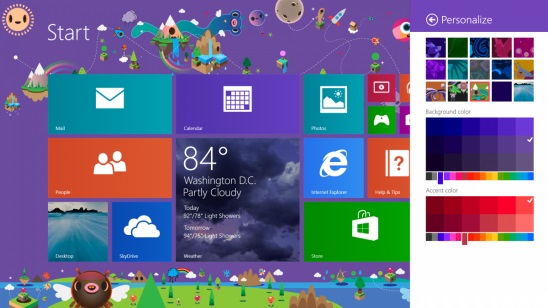 And, that’s not all, about the new improved start screen. Even the apps in the Start screen are customizable. The default Weather tile, now can expand to show 3 days forecast of 3 cities, Calendar can display the complete events of the day. And unlike the desktops apps in Windows 8, the desktop apps of Windows 8.1 can use colorful tiles, that makes Start screen looks more nicer. Also the Windows Store tile is now live! and constantly shows app recommendations. Also, now, it’s possible to select multiple tiles together and then resize, uninstall, or rearrange them together. 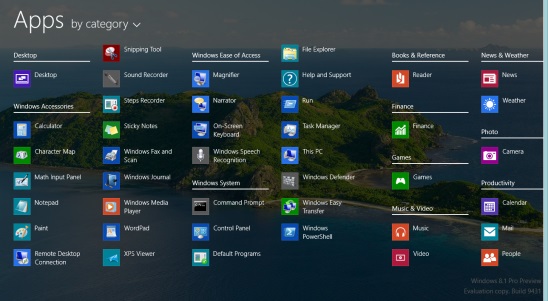 You can also view all the installed apps with a single swap, and filter them according to date installed, name, category, or most used.

Depending on the size of your monitor, you can now snap up to 4 apps at one time. And then change the size of these snapped apps as per your needs. That is, now if you already have some apps snapped, and you launch a new app, then you’ll get a floating app tile that allows you to snap the new app to the desired location. And a cool thing about this floating tile is, it even gives hints where you can put the opened app. 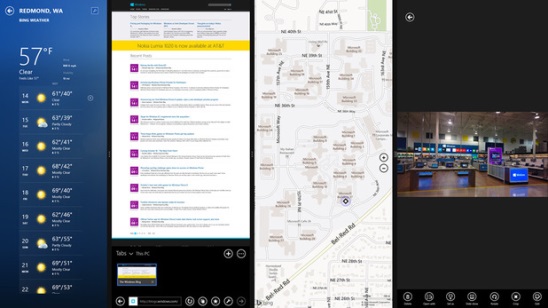 The Windows 8.1 search charm is now powered by Bing Search. Users can now, search for all the files stored locally in your PC, Skydrive, system settings, and even the web. Now the search is more like an app itself. And in place of being specific to a particular app, it has gone universal. Bing is now deeply integrated in Windows 8.1 and shows the results in full screen with all type of data including audio, video, images, and textual information. 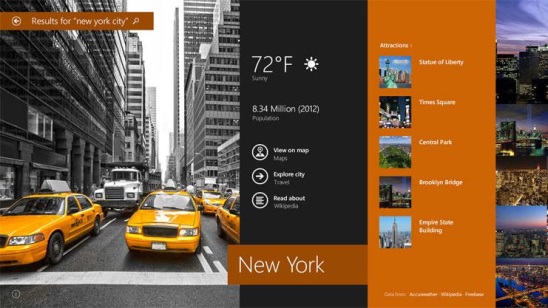 This new version of Microsoft OS, is now very well integrated with Skydrive. All the Settings, documents, files, and apps gets automatically stored in the Microsoft cloud based storage system by default. The users will get 7GB of free cloud storage. Now using this feature you can now log into any Windows 8.1 system and start loading the saved apps and documents in that system.

The Internet Explorer 11, is much more improved from the earlier versions. Now, you can open as many tabs as you want. These tabs are are now present at the bottom of the screen. The tabs are larger, the pages loads faster, and the browsing is much more smooth. The ability to pin sites to start screen is still there. Plus you can also sync the browsing history, tabs, settings, and favorite sites across other Windows 8.1 devices. All you have to do is log in with your  Microsoft credentials.

The default built-in apps, that is Mail app, Calendar app, Photo app etc. have been improved, both visually and functionally. Some of these apps have been completely redesigned, for instance the Mail and Calendar apps.  You can drag and drop mails in the folders, select multiple mails with check option, and filter them. Performance is also improved. This time Microsoft has also included the Skype app as the default app. However it works the same old way. A really cool feature of this Skype app is you can now accept calls without unlocking your PC. The  default Photo app is also improved in terms of use. You can not only view the photos in full screen or see a slideshow,  but you can also use some good photo editing tools, such as rotate, crop, and apply filters.

The Windows Store design is also improved. There are same set of Categories and filtering options. This makes it easier to find apps easier. Also, now Facebook has it’s own official app in the Windows Store. A good improvement of this Windows Store is, it updates everything automatically in the background.

Microsoft did really well in terms of improving from the previous versions of Windows. The Windows 8.1, sure is more better, faster, easier and good looking then earlier one. Doing this much of improvement in just under 12 months is quite recommendable. They did tried well in terms of combining the traditional (non-touch) and modern (touch) worlds together. There are few really good noticeable improvements. The unified search, modifying Start screen, Skydrive syncing are good example of such improvements. Although there are a lot of things that can be improved further, still Windows 8.1 is a great upgrade.