DuckDuckGo Lite is a minimal ad-free version of DuckDuckGo. The userbase on the Internet is increasing day by day as more people are coming online. The majority of this new userbase is from developing countries who generally have low-end devices with storage and bandwidth limitations. The limited memory and bandwidth make it hard to use fully-fledged apps like Facebook (~44MB), Google (~88MB), Twitter (~31MB), etc. Many big tech companies saw it as an opportunity and made “Lite” versions of their apps to grab that new userbase. DuckDuckGo is the latest candidate to join this race.

DuckDuckGo has released a simplified version of its search engine and named it DuckDuckGo Lite. The name is pretty much self-explanatory; it’s a sliced-down version of the search engine with only the core functionality. The Lite version loads lesser resources and thus require less memory and bandwidth. This makes it easily accessible on low-end devices with limited bandwidth and much faster on resourceful devices.

DuckDuckGo Lite only offers the core functionality, simple search. It offers you a search box to type your keyword and a button to search it. It does not have any content filters, search filters, videos suggests, or even images. 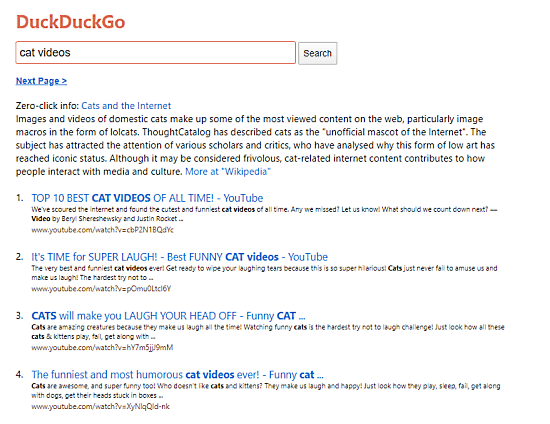 When you search for something, you get results in simple text with links. The results are identical to what you get on the regular version but without ads, product recommendations, and video thumbnails. All this adds up to a minimal interface without any unwanted distraction.

The above-attached screenshot shows you the resource-based comparison between the two versions of the search engine. As you can see, the Lite version is only ~11KB in size with ~7.01KB of the transfer. This is way lesser than the original landing page which is ~1.08MB in size with ~41KB transfer. Due to the minimal nature, it has to send only 3 requests to the server and loads in ~335ms which is around 4.5 times faster than the original. 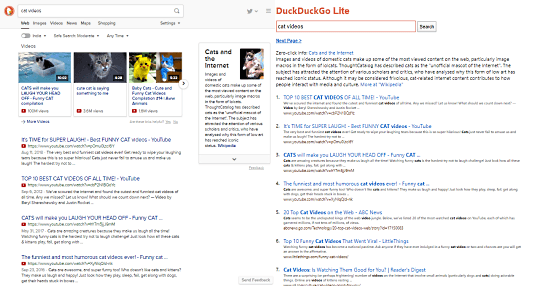 Here is a visual comparison between the DuckDuckGo original landing page and the Lite landing page. The Lite version shows the same results including the knowledge panel without any extras.

DuckDuckGo is a lighter version of the search engine that loads lesser resources which makes it fast even on the low-end devices or low connectivity. The minimal and ad-free interface might attract other Internet users who want privacy without ads and extra features.