Distraction Shield is a free tool which can be used to block Facebook and access to the popular social networking sites and chat services. This tool has a great significance in today’s time in different places whether it’s a school, college or a corporate building. This is because often students or employees can be seen wasting their time on such websites during the working hours. Hence it becomes important to keep a check on their activities. Distraction Shield is here to end your woes and make it easier to make sure that it blocks access to social networking websites and messengers or chat clients.

As you can see, we posted the “hosts” file in the destination folder. We tried opening Facebook, but this was what we could see: 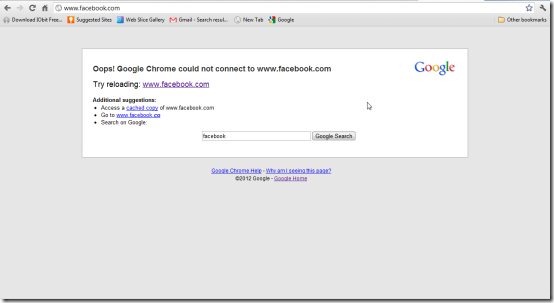 For Mac you will have to follow the same instructions as those on a Linux machine. The only difference is that the text editors would be the same and the content has to be copied to the destination “/private/etc/hosts”.

Distraction Shield is an interesting tool to block Facebook and other social networking sites; since it can help in increasing the productivity of the people at your workplace. The name itself is sufficient to describe what it does. However, the IRC or the Internet Relay chat networks won’t be blocked. This is because a number of applications such as file sharing, group discussions become possible with such networks. Hence the productivity is increased. Hence Distraction Shield is worth trying if you wish to do it in a small organization rather than paying huge amounts for other software which offer the same services.