Barcoder is a Windows 8 QR Code Generator. As against the name, it is mainly used to generate QR codes for the textual data that you input in the app. There is also an option to scan QR Codes and you can get info about that QR Code.

In addition to that, you also get the option to save and share the generated QR Codes.

Barcoder is freely available in the Productivity category of the Windows Store. 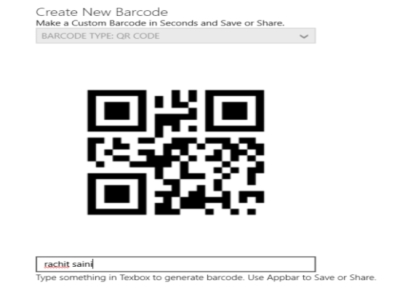 Let’s get you some idea about the main functions of the app.

As you get to the main screen of Barcoder after launching it, the main options of the app, that is scanning QR Codes and generating info about it, and to generate QR Code for textual data that you input to it will be shown to you on the main landing page of the app. 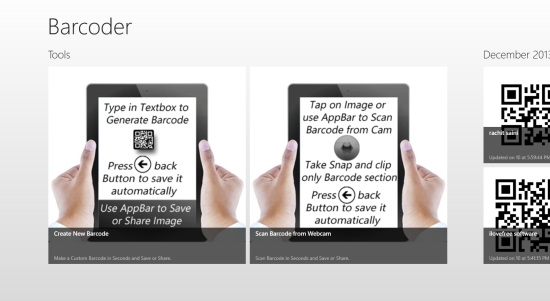 Now, let me tell you about the main features that are available to you. 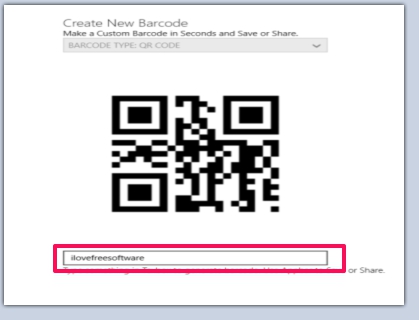 Get info for any QR Code

In order to scan a particular QR Code so as to generate info about it, you just have to use the option that is available for it. In the panel that is appearing on the left side, there is a picture available on clicking which the integrated photo device of your system will open. Using it you have to take photo of the QR Code that may be available to you, and you want to get info for that. In addition to that, you can use the bottom flyout of the app, which has option to scan the QR Code. 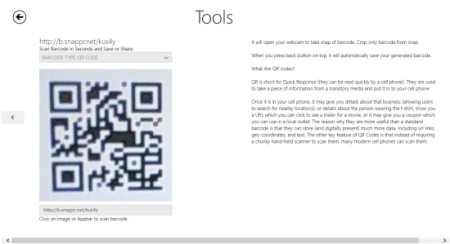 While scanning your QR Code, you have to take care that you scan only the QR Code. So take care while cropping the image for it, as if more than the QR Code is scanned, the app won’t give you the right info.

For the option of generating QR Code for the textual data, there are two options available. They are as:

You can save the generated QR Code anywhere on your local storage. For that you can use the option for it that is available in the bottom flyout of this option. The QR Code would be saved in PNG format.

You can also share the generated QR Code for the data, over the Internet by using the option for it that is available in the bottom flyout.

Barcoder is a nice Windows 8 QR Code generator that gives you the facility to get info on any QR Code and can also generate QR Code for any of your textual data. Be sure about trying it as its working is quite simple. Do share your experience with us.